Heading from the French Broad Hustler and Western North Carolina Democrat describe the 1916 earthquake. Image courtesy the Library of Congress.

A Brief History of Large Earthquakes in North Carolina

NORTH CAROLINA -- Sunday’s 5.1-magnitude earthquake near Sparta, North Carolina, was one of the strongest in the state’s history.

Small quakes are not uncommon, especially in the mountains along the border with Tennessee, but people in North Carolina haven’t felt an earthquake this strong for more than 100 years.

On Sunday, the Sparta quake knocked over stone chimneys and some houses shifted off their foundations, state geologist Kenneth Taylor said.

On Feb. 21, 1916, a 5.2-magnitude earthquake shook under Skyland, just south of Asheville. The temblor was felt as far away as Norfolk, Virginia, according to Taylor.

The damage would have been familiar to people near the center of Sunday’s earthquake. 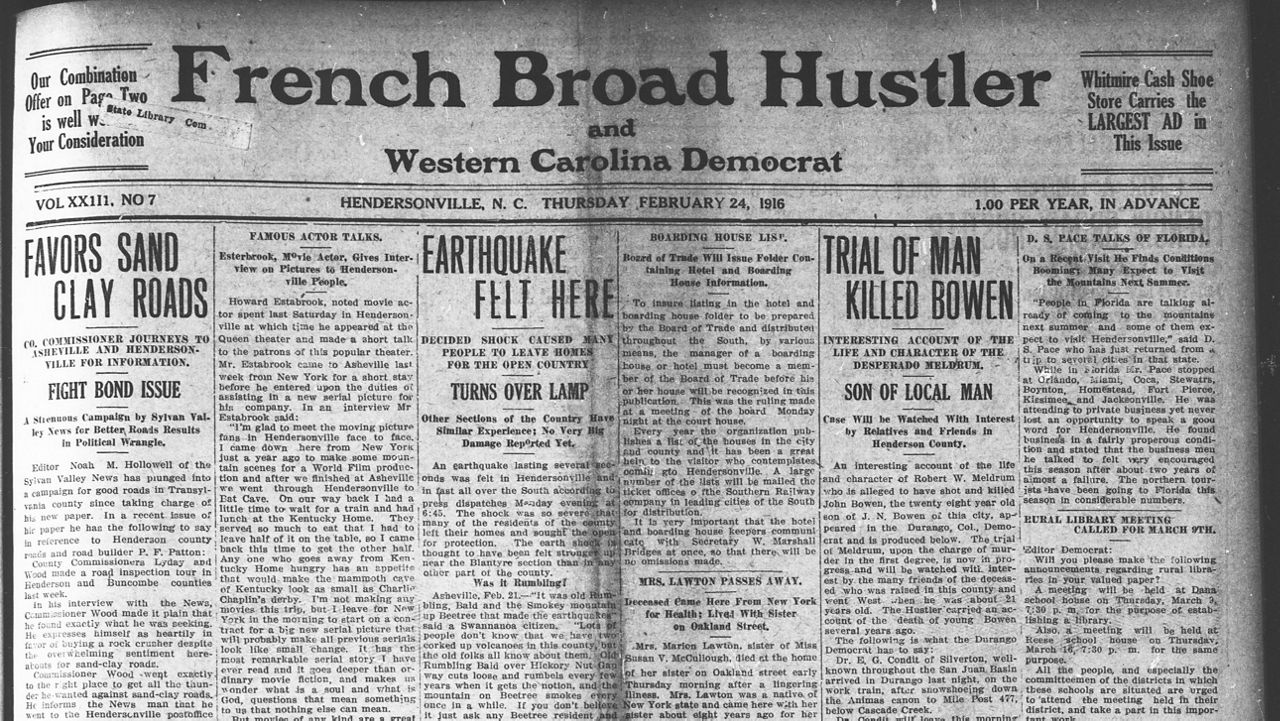 Heading from the French Broad Hustler and Western North Carolina Democrat describe the 1916 earthquake. Image courtesy the Library of Congress.

The tops of chimneys fell from houses and the shaking broke window panes when the largest recorded earthquake in North Carolina hit on the Monday evening at 6:39 p.m., Taylor wrote in a commemoration on the 100th anniversary of the quake.

Headlines in the French Broad Hustler and Western North Carolina Democrat, a newspaper in nearby Hendersonville, read: “Earthquake felt here: Decided shock caused many people to leave homes for the open country: Turns over lamp.”

The Weather Bureau reported damage in 59 cities and towns in North Carolina and South Carolina, according to Taylor.

The Feb. 22, 1916 edition of the Raleigh News & Observer carried a story on the front page, saying the quake was felt in parts of Georgia and all the way out to the coast in Wilmington.

One of the stories passed down about the 1916 quake, Taylor recalled, is that the city attorney’s office was on the top of a tall building in the city. The attorney had a mosaic of the city seal in his office that cracked as the building shook and swayed in the temblor.

The story could not be confirmed by Spectrum News.

The last earthquake to cause damage that was centered in North Carolina was during 1981 in Henderson County.

One of the oldest stories still told about North Carolina earthquakes is about how Rumbling Bald Mountain got its name, Taylor said.

For five months in 1874, a series of smaller earthquakes struck near what is now Lake Lure, in the mountains east of Asheville, according to NCpedia, part of the State Library of North Carolina.

Some people even worried there was a volcano rumbling under the mountain, according to the library.

Rumbling Bald Mountain wasn’t a volcano, but it was experiencing an “earthquake swarm,” Taylor said. “Instead of one big event, it’s a series of little events,” he explained.

Taylor, who has worked as a geologist for the state since the mid-1990s, said that earthquakes, especially big ones, are rare in North Carolina. But, he said, they’re bound to happen some time.