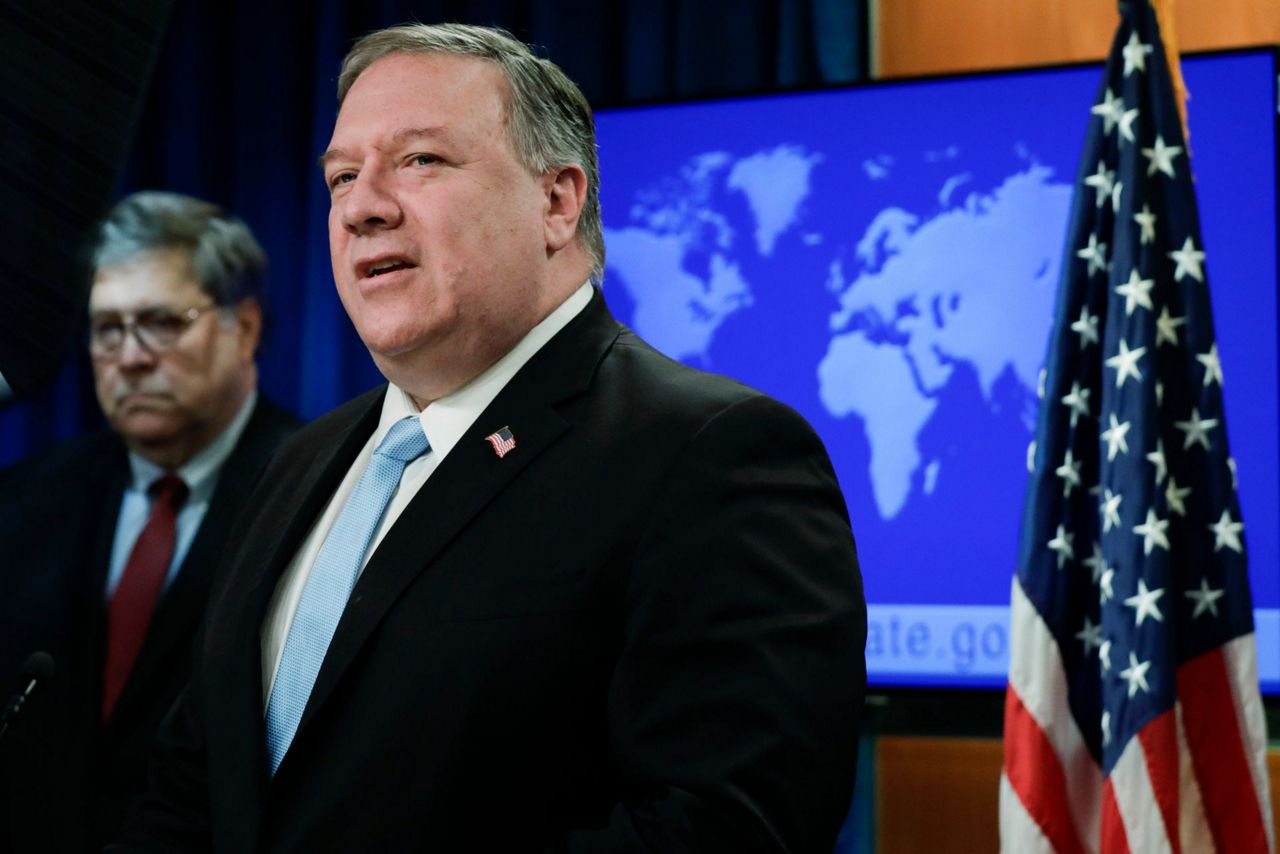 Secretary of State Mike Pompeo speaks as Attorney General William Barr listens, during a joint briefing, Thursday, June 11, 2020 at the State Department in Washington, on an executive order signed by President Donald Trump aimed at the International Criminal Court. Trump has lobbed a broadside attack against the International Criminal Court. He's authorizing economic sanctions and travel restrictions against court workers directly involved in investigating American troops and intelligence officials for possible war crimes in Afghanistan without U.S. consent. The executive order Trump signed on Thursday marks his administration’s latest attack against international organizations, treaties and agreements that do not hew to its policies. (Yuri Gripas/Pool via AP)

Pompeo to meet top Chinese official in Hawaii amid tensions

WASHINGTON (AP) — Secretary of State Mike Pompeo is making a brief trip to Hawaii for closed-door talks with a senior Chinese official, as relations between the two nations have plummeted over numerous disputes.

The State Department said Pompeo and his deputy Stephen Biegun left Tuesday for Hawaii but offered no additional detail about his plans. People familiar with the trip said Pompeo and Biegun will meet on Wednesday with a Chinese delegation led by Yang Jiechi, the Chinese Communist Party’s top foreign affairs official.

The private discussions are set to take place at Hickam Air Force Base in Honolulu and will cover the wide range of issues that have set the world’s two largest economies on a collision path, according to the people familiar with the trip, who were not authorized to discuss it publicly and spoke on condition of anonymity.

Washington and Beijing are at odds over trade, China’s handling of the coronavirus pandemic, human rights, the status of Hong Kong and increasing Chinese assertiveness in the South China Sea. China has become key element in the 2020 presidential campaign with President Donald Trump and his supporters seeking to make the administration's tough stance with Beijing a main foreign policy selling point.

Last month, Trump and Pompeo announced that the U.S. would be rescinding special trade and economic privileges it had extended to Hong Kong after the former British territory reverted to Chinese control in 1997. The move was in response to Beijing's decision to impose strict new national security laws limiting the right to free speech and assembly similar to those on the mainland.

And, since last year, both sides have ramped up hostile rhetoric against the other and taken reciprocal steps to expel journalists and restrict diplomats’ ability to travel.

The presence of Biegun, who is also the U.S. special envoy for North Korea, on the trip suggested that the stalemate in the Trump administration's diplomatic efforts with Pyongyang would also be on the agenda.

Earlier Tuesday, North Korea blew up an inter-Korean liaison office building just north of the heavily armed border with South Korea, in a carefully choreographed, largely symbolic display of anger that puts pressure on Washington and Seoul as nuclear diplomacy remains deadlocked. The last face-to-face meeting between the two sides was in October outside Stockholm, Sweden.

In a brief statement acknowledging the destruction of the office, the State Department said “the United States fully supports the ROK’s efforts on inter-Korean relations and urges the DPRK to refrain from further counterproductive actions.” ROK refers to South Korea's official name, the Republic of Korea, and DPRK is shorthand for the country's formal name, the Democratic People's Republic of Korea.

The destruction came after the North marked the two-year anniversary of Trump's first meeting with North Korean leader Kim Jong Un last week with defiant statements vowing never again to give the president anything he could present as a foreign policy success without significant concessions.