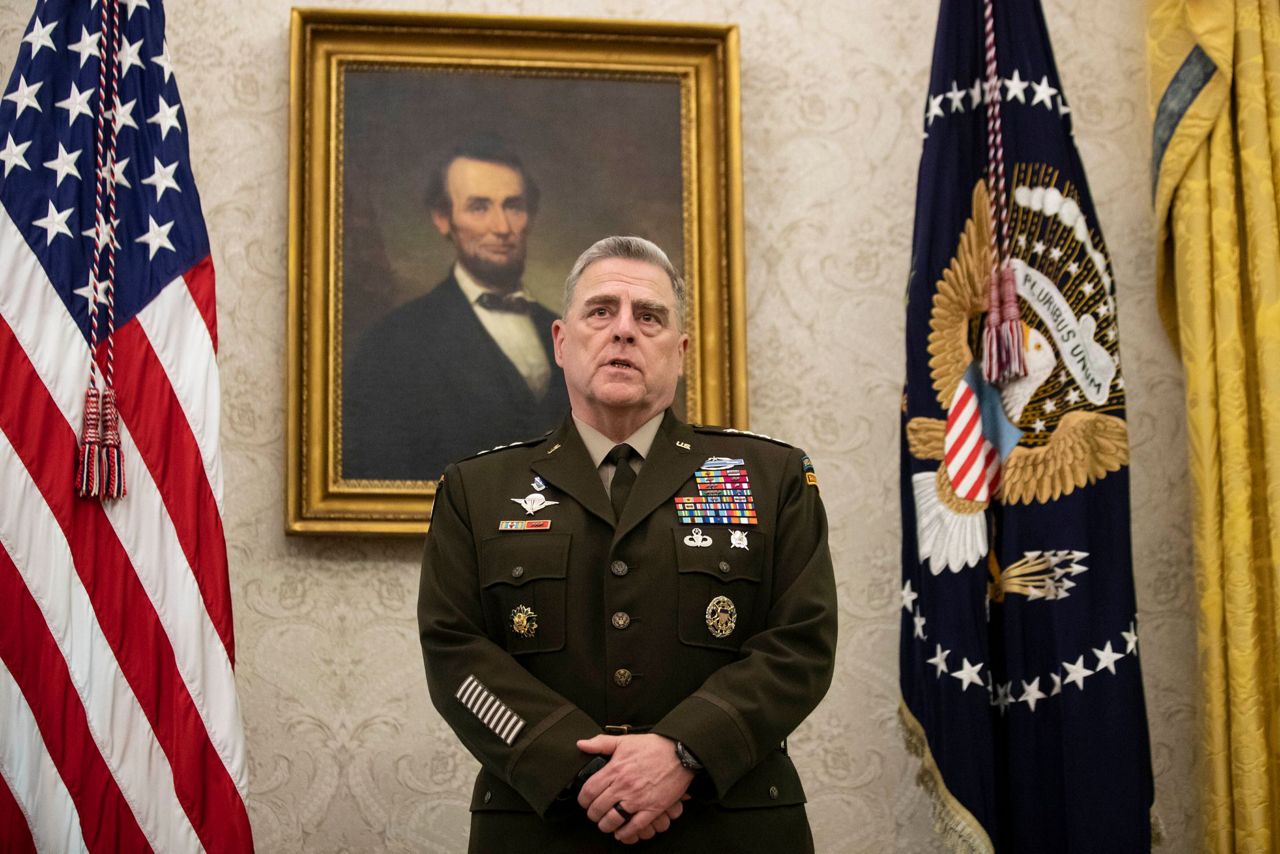 1 of 2
FILE - In this May 15, 2020 file photo, Joint Chiefs Chairman Gen. Mark Milley speaks during the presentation of the Space Force Flag in the Oval Office of the White House with President Donald Trump, in Washington. The top U.S. general held unannounced talks with Taliban peace negotiators in the Persian Gulf to urge a reduction in violence across Afghanistan, even as senior American officials in Kabul warned that stepped-up Taliban attacks endanger the militant group's nascent peace negotiations with the Afghan government. (AP Photo/Alex Brandon, File) 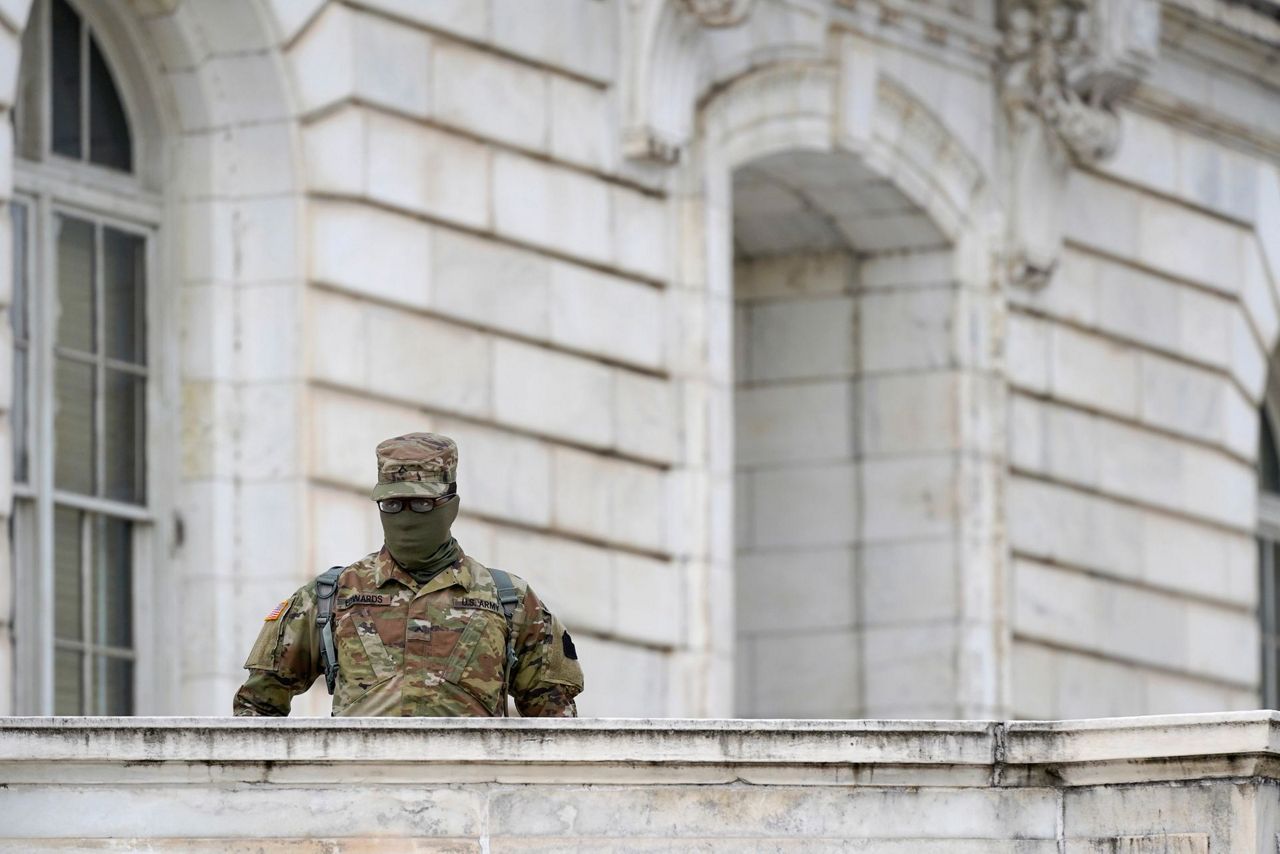 2 of 2
A member of the military stands guard outside Russell Senate Office Building on Capitol Hill in Washington, Friday, Jan. 8, 2021, in response to supporters of President Donald Trump who stormed the U.S. Capitol. (AP Photo/Patrick Semansky)

WASHINGTON (AP) — Amid worry about renewed violence on Inauguration Day, the military's top leaders issued a written reminder to all service members Tuesday that the deadly insurrection at the Capitol last week was an anti-democratic, criminal act, and that the right to free speech gives no one the right to commit violence.

A memo signed by all members of the Joint Chiefs of Staff also reminded military members that Joe Biden was duly elected as the next president and will be sworn in to office on Jan. 20.

The memo was unusual in that the military leadership, including Gen. Mark Milley, chairman of the Joint Chiefs, felt compelled to remind service members that it is wrong to disrupt the constitutional process. The language went further than statements by the civilian leader of the Pentagon, Acting Defense Secretary Christopher Miller, by describing the assault as an act of sedition and an insurrection. Miller has called it “reprehensible and contrary to the tenets of the United States Constitution.”

It comes as law enforcement agencies attempt to determine the full extent of criminal activity at the Capitol and to discover the extent of participation by current or past military members.

It has already been established that some military veterans participated in the riots at the Capitol, but the extent of any active-duty involvement has not been established. Sen. Tammy Duckworth, an Iraq war veteran, on Monday wrote to the Defense Department requesting that its criminal investigative organizations cooperate with the FBI and the U.S. Capitol Police in investigating whether current and retired members of the armed forces were part of a “seditious conspiracy” against the government.

The Joint Chiefs memo did not allude directly to the question of military involvement.

“We witnessed actions inside the Capitol building that were inconsistent with the rule of law,” the memo said. "The rights of freedom of speech and assembly do not give anyone the right to resort to violence, sedition and insurrection.

“As service members, we must embody the values and ideals of the nation. We support and defend the Constitution. Any act to disrupt the Constitutional process is not only against our traditions, values and oath; it is against the law.”

Gen. Robert Abrams, who as commander of U.S. forces in South Korea is one of the Army's most senior generals but is not a member of the Joint Chiefs, wrote on Twitter that no military member should misunderstand what happened Jan. 6.

“There is no ambiguity of what occurred at the Capitol — that was an attempted insurrection,” he wrote. “If you are serving in uniform and think it was something else, I would encourage (you) to sit down and read the constitution that you swore an oath to support and defend. No gray area there either. No room on our team if you are not willing to defend the constitution against all enemies, foreign AND domestic.”

Ahead of next week's inauguration and President Donald Trump's departure from office, the National Guard is gearing up to provide support to law enforcement agencies. There is no plan to use active-duty forces in security operations.