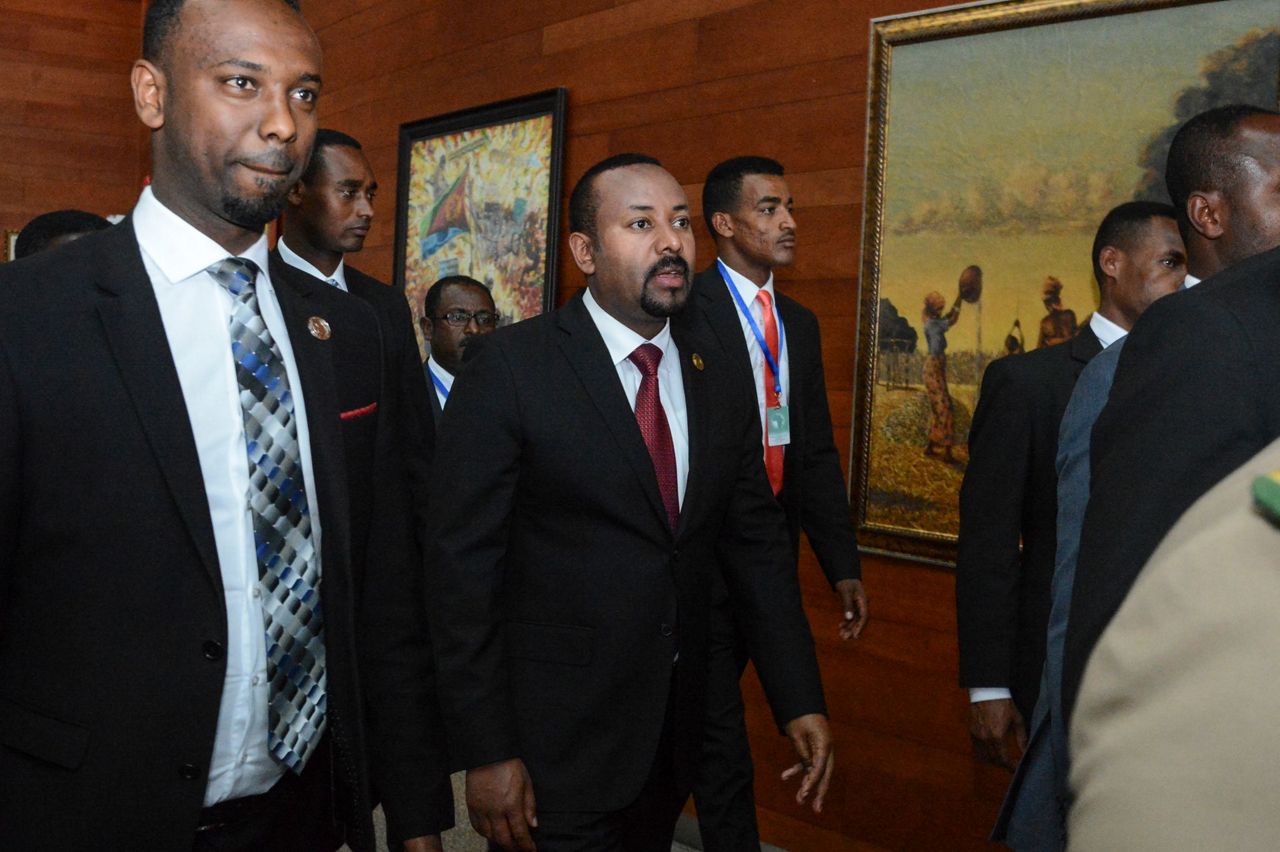 1 of 2
FILE - In this Sunday, Feb. 9, 2020, file photo, Ethiopia's Prime Minister Abiy Ahmed, center, arrives for the opening session of the 33rd African Union (AU) Summit at the AU headquarters in Addis Ababa, Ethiopia. Ethiopia's prime minister on Wednesday, Nov. 4, 2020 ordered the military to confront the Tigray regional government after he said it attacked a military base overnight, citing months of "provocation and incitement" and declaring that "the last red line has been crossed." (AP Photo, File) 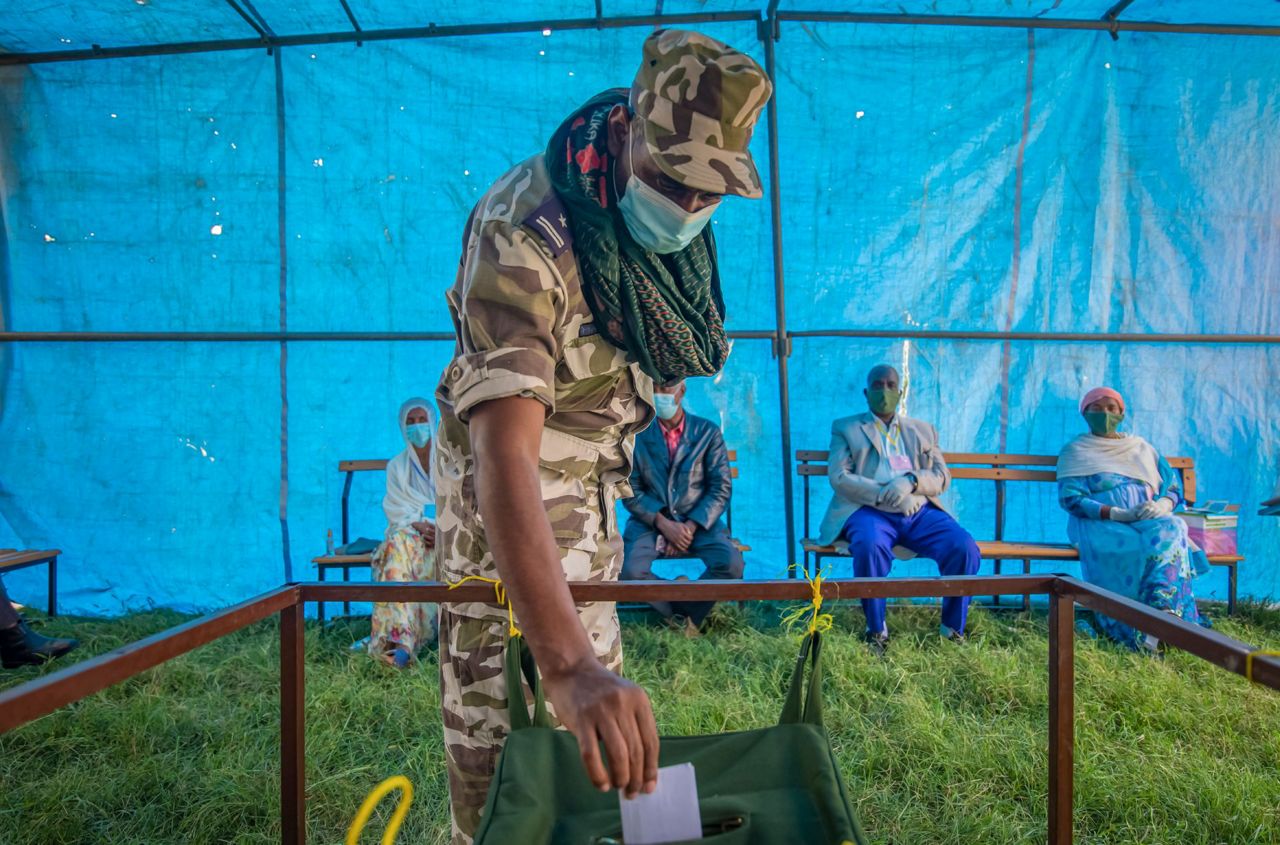 2 of 2
FILE - In this Sept. 9, 2020 file photo, a member of Tigray Special Forces casts his vote in a local election in the regional capital Mekelle, in the Tigray region of Ethiopia. Ethiopia's prime minister on Wednesday, Nov. 4, 2020 ordered the military to confront the Tigray regional government after he said it attacked a military base overnight, citing months of "provocation and incitement" and declaring that "the last red line has been crossed." (AP Photo, File)

ADDIS ABABA, Ethiopia (AP) — Ethiopia’s Nobel Peace Prize-winning prime minister on Wednesday ordered the military to confront the country’s Tigray regional government after he accused it of carrying out a deadly attack on a military base, declaring “the last red line has been crossed" after months of alleged incitement.

The statement by Prime Minister Abiy Ahmed’s office, and the reported overnight attack by the well-armed Tigray People’s Liberation Front, immediately raised concerns that one of Africa’s most populous and powerful countries could plunge back into war. That would send a shock wave through one of the world's most turbulent regions, the Horn of Africa. Ethiopia's neighbors include Somalia and Sudan, and the prospect of spreading instability sent a chill down the spines of observers.

Signaling the gravity of the threat, the United States in the midst of its election drama at home quickly issued a statement urging “an immediate de-escalation of the current situation in Tigray and a measured response by both sides.”

Addressing the nation on TV, Abiy announced “several martyrs” in the attack in Mekele, the northern Tigray region’s capital, and Dansha town. The prime minister said “the end is near” for the regional force, which is based in Ethiopia’s most sensitive region, neighboring Eritrea. The two countries made peace in 2018 after a long border war.

The TPLF had been the dominant part of Ethiopia’s governing coalition before Abiy took office in 2018 and announced sweeping political reforms that won him the Nobel last year. Those reforms, however, have opened space for old ethnic and other grievances. The TPLF, feeling marginalized, left the coalition last year. It remains a strong military force, observers say.

Ethiopia on Wednesday declared a six-month state of emergency in the Tigray region, saying that “illegal and violent activities within the National Regional State of Tigray are endangering the constitution and constitutional order, public peace and security, specially threatening the country’s sovereignty.”

There was no immediate word from the TPLF, and all internet and phone lines were cut in the Tigray region following the announcement, provoking distress among people who could not reach loved ones. Tigray TV reported that airspace has been closed over the region, and it asserted that the northern command of Ethiopia's military had defected to the Tigray government. The prime minister's office told The Associated Press the defection report was “not true.”

Ethiopia was already stressed by a dispute with Egypt over a massive Ethiopian dam project that has drawn rare attention by President Donald Trump to Africa, and by a multi-layer crisis with the COVID-19 pandemic, deadly ethnic violence and a locust outbreak.

Now the greatest test of Abiy’s rule has has come.

Tigray officials have objected to the postponement of Ethiopia’s national election, once set for August, because of the coronavirus pandemic, and the extension of Abiy’s time in office.

On Sunday, a senior TPLF official, Getachew Reda, told the AP his side will not accept a negotiation with the federal government.

“What we need now is a national dialogue, not a negotiation,” he said. The TPLF says the release of detained former officials is one precondition to opening talks.

“This war is the worst possible outcome of the tensions that have been brewing,” William Davison, International Crisis Group’s senior analyst for Ethiopia, said Wednesday, urging a ceasefire. “Given Tigray’s relatively strong security position, the conflict may well be protracted and disastrous.”

Abiy’s statement asserted that the TPLF attacked a military base in Tigray early Wednesday and attempted to take artillery and other equipment. The statement accused the TPLF of arming and organizing irregular militias.

“TPLF has chosen to wage war,” the statement said.

After months of “extreme patience” by the federal government, “a war however cannot be prevented only on the goodwill and decision of one side,” it added. “The last red line has been crossed with this morning’s attacks and the federal government is therefore forced into a military confrontation” to save the country.

Observers have worried for months about the growing tensions and their implications for the long-turbulent Horn of Africa region, where Abiy cast himself as a peacemaker shortly after taking office.

A report by the United States Institute of Peace said the fragmentation of Ethiopia “would be the largest state collapse in modern history, likely leading to mass interethnic and interreligious conflict ... and a humanitarian and security crisis at the crossroads of Africa and the Middle East on a scale that would overshadow the existing conflicts in South Sudan, Sudan, Somalia, and Yemen.”

The international community needs to rally around the idea of national dialogue in Ethiopia, the International Crisis Group warned a week ago.

“The alternative, given the country’s multiple and bitter divides, is a potential march to war that would be catastrophic for Africa’s second most populous country and would send shock waves, and refugees, into other Horn of Africa countries as well as across the Mediterranean,” the group wrote.

It was not immediately clear how Ethiopia's other regions would respond.

The head of the Amhara region, Temesgen Tiruneh, in a Facebook post said members of Tigray's security forces were welcome to defect to his region, writing that “we know you are fighting because you’ve no choice.” The Amhara and Tigray regions before Abiy's rule were locked in a bitter confrontation over disputed border areas.