NEWSLETTERSign Up For Our Daily Newsletter - Your North Carolina
WATCH NOWExploring Your Health with Erin Billups
COMMUNITY CALENDARAdd An Event to Our Calendar
NEW PODCAST EPISODEHelms vs. Hunt: Comparing One of NC’s Most Intense Debates to Today
GET OUR NEW APPOur new Spectrum News app is the most convenient way to get the stories that matter to you. Download it here.

Colorado State University released its updated hurricane outlook for the 2020 tropical Atlantic season on Wednesday, and the new forecast calls for what would be a near record-breaking 24 named storms, 12 hurricanes, and five major hurricanes.

Though these forecasts would represent one of the biggest tropical seasons on record, there are several reasons to take this forecast with a grain of salt.

The new CSU forecast calls for 24 named storms (which includes tropical storms and hurricanes), 12 hurricanes, and five major hurricanes (Category 3 or above).

That's about double the average for the Atlantic hurricane season which consists of 12 named storms, six hurricanes, and two major hurricanes.

The forecast also increases the odds of a major hurricane making landfall on the U.S. from 52 percent to 74 percent.

If this forecast were to pan out, which is a big if, it would represent one of the busiest seasons on record in the Atlantic basin. Currently, the record-holder for the busiest Atlantic season is 2005, which featured 28 named storms, 15 hurricanes, and seven major hurricanes.

However, a significant proportion of the forecast storms have already taken place, and while there's little doubt that conditions are ripe for an overall active season, there's little way to tell where future storms might ultimately go.

"Nine of those storms have already happened, and many of the upcoming might stay out at sea," said Spectrum News Chief Meteorologist Mike Clay. "Just don't know. No reason to freak out."

Why This Could Be An Extra Busy Season 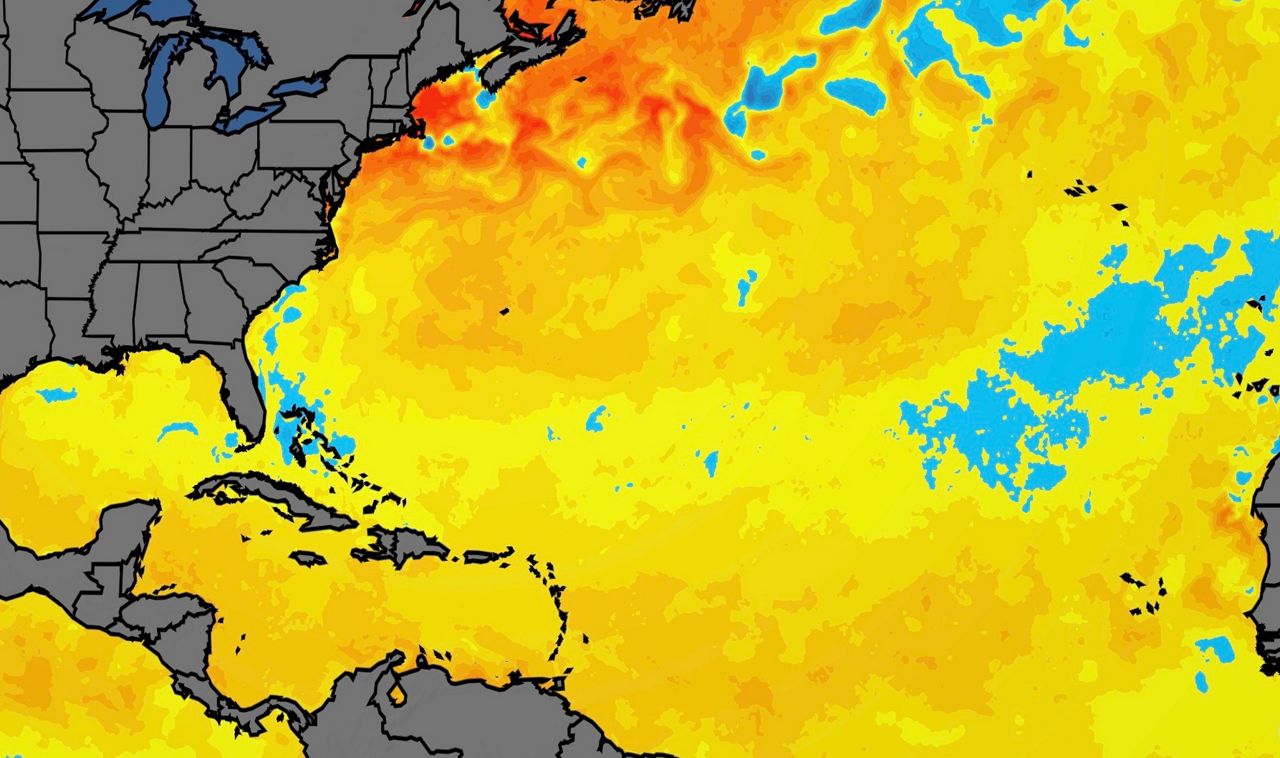 The Atlantic is exceptionally warm, potentially fueling a busy hurricane season.
One limiting factor for tropical systems is wind shear. That's the change in wind speed and direction with height that can essentially blow apart a storm before it's able to organize or weaken one once it does.
However, the CSU team noted that overall wind shear levels in the tropical Atlantic are at their second-lowest levels since records began in 1979.
Finally, storms often originate as tropical waves off the west coast of Africa. When those waves have more energy and moisture, they typically breed more and stronger tropical systems as they travel westward across the Atlantic Ocean. 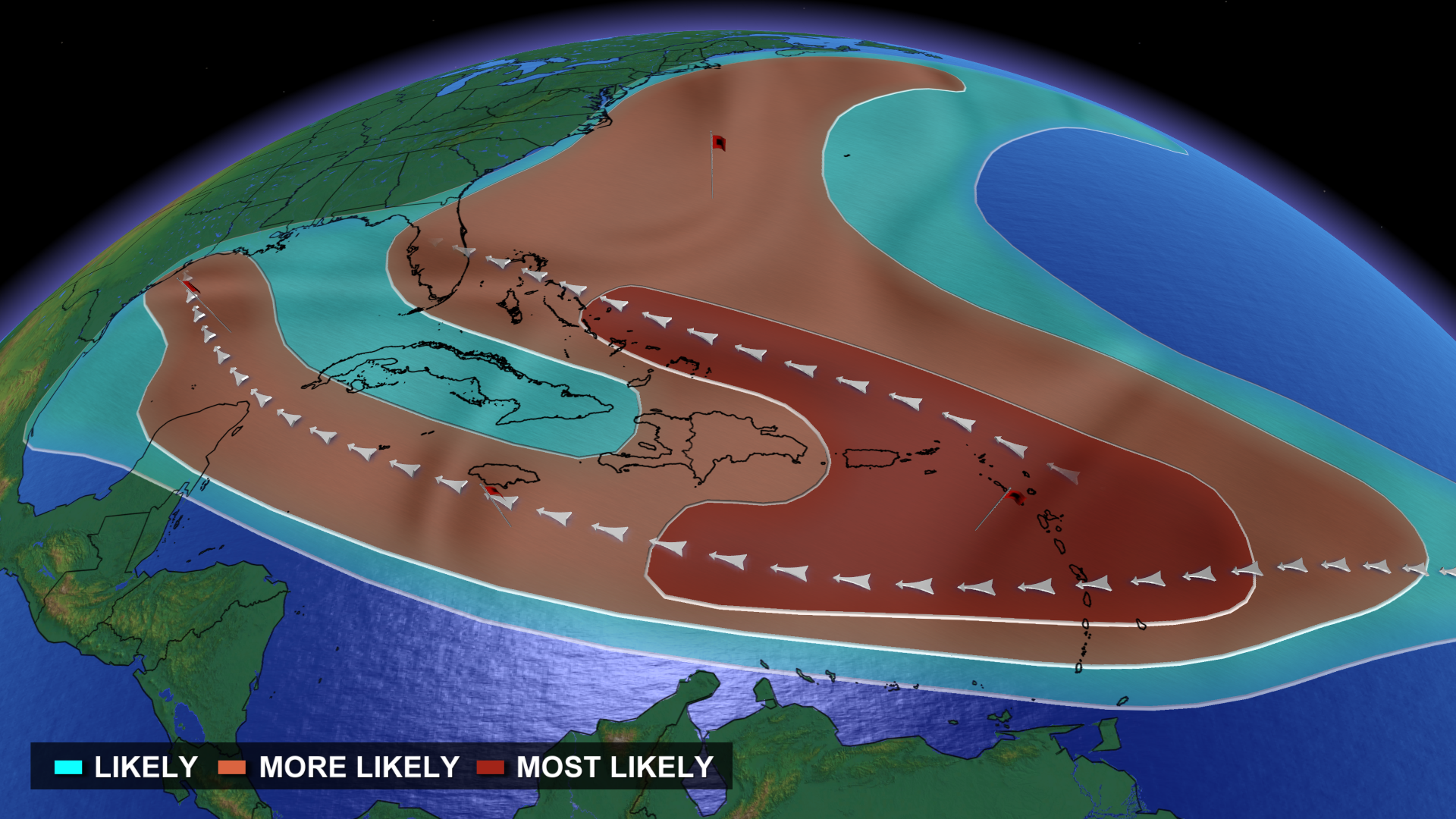 Why You Don't Need To Panic

Worried? Take a deep breath.
Seriously.
"We've already had nine named storms, although a couple of them have been questionable," said Spectrum News Chief Meteorologist Bryan Karrick referring to a few short-lived and weaker tropical storms. "So far, two Category 1 hurricanes this season, and the overall pattern doesn't favor a busy August."
"If this forecast holds true, and sea surface temperatures are certainly conducive for storm development, the second half of the season may be busy. But we don't focus on the forecast numbers, because it only takes one storm to cause problems."
So, think of it this way: more than a third of the forecast storms this season have already taken place, including two hurricanes.
Another key point in all of this as well: seasonal tropical forecasts are notoriously fickle. Forecasting is far from an exact science, and longer-range forecasts like this one are especially error-prone.
But even if 24 storms were to develop, there's no guarantee that some - or any - of those storms would hit the U.S. The northern Atlantic Ocean and the Caribbean Sea combined are more than five times the size of the entire United States (including Alaska), so there's plenty of room for tropical storms and hurricanes to roam without striking land.
The overall takeaway: don't be scared, just be prepared. Check your supply kit and review your plan with your family, so that you are ready for anything that may come your way over the next few months.