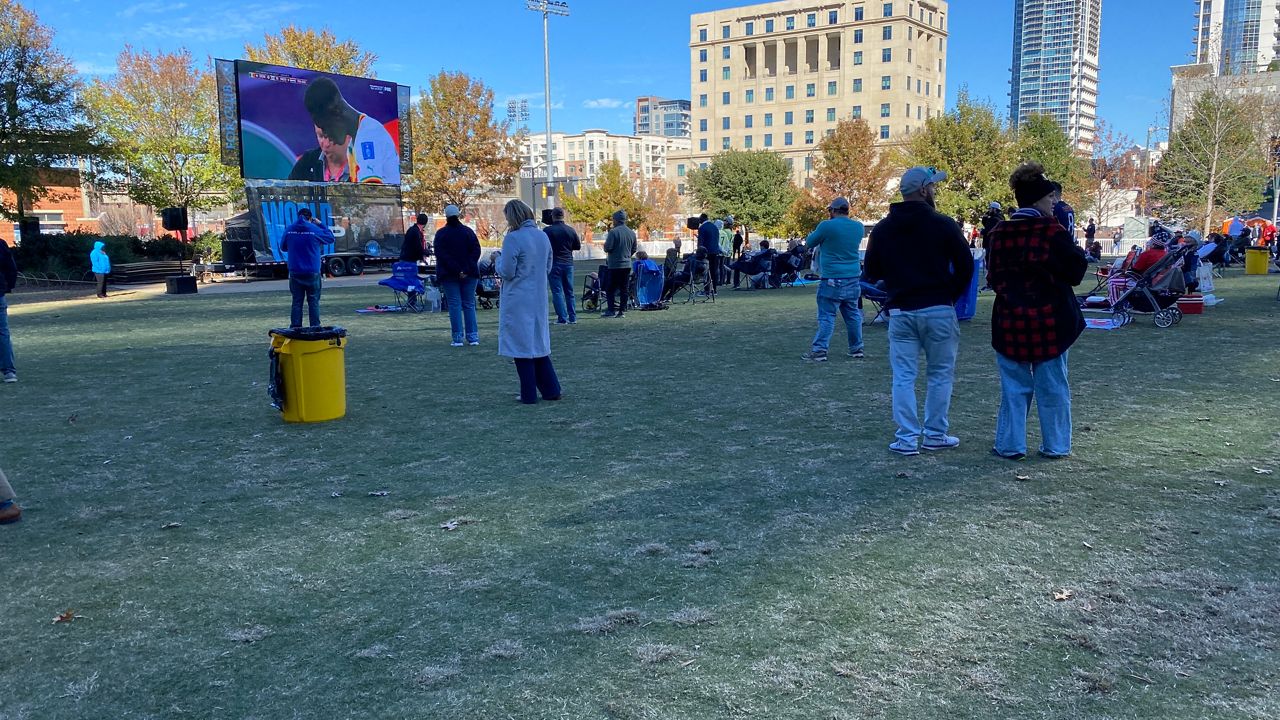 CHARLOTTE, N.C. — Hundreds of soccer fans headed to Uptown Charlotte on a brisk Monday afternoon to root on the United States’ Men’s National Team in the 2022 FIFA World Cup.

The USMNT played to a 1-1 draw with Wales in its first game of group match play.

Meanwhile, Qatar, this year’s host nation, is grappling with multiple controversies over its alleged human rights record with LGBTQ people and other groups and the alleged deaths of foreign workers tasked with building its stadiums.

The U.S. Men's National Team played to a 1-1 draw with Wales in its first group play game

Qatar, this year's host country, is facing criticism for its handling of human rights concerning LGBTQ people and other groups, as well as foreign workers

“Honestly, it’s the World Cup, people are going to watch no matter what. I think some of the things that are going on over there aren’t great. I hope the athletes use this stage to speak up for what’s right,” said soccer fan Peter Powers before the USMNT game began Monday.

Powers, a Charlotte resident, said he’s been a soccer fan for a long time and was excited to see the U.S. back on the world’s biggest stage, despite the host nation.

The U.S. Men’s National Team missed the 2018 FIFA World Cup. So, Powers said he had been looking forward to this year’s first game.

“Looking ahead, I mean we’ve got the 2026 World Cup coming here. So, I would hope a big tournament in Qatar only grows the hype into 2026. People are going to be watching this, young kids are hopefully going to pick up the game. Yeah, only up from here for the U.S. soccer-wise,” Powers added.

Charlotte and North Carolina are also looking to grow interest in soccer, as Charlotte Football Club completed its first season in Major League Soccer earlier this year. Powers, a fan of CFC, said he was not surprised by Monday’s turnout in Uptown.

“Everyone’s just really excited for the World Cup. I mean it’s that time of year, everybody’s really into it. And, being that the U.S. is finally back in. I’m not that surprised people are showing out,” he said while watching an earlier game.

Charlotte FC hosted Monday’s watch party and said more than 5,000 fans registered to attend the event, despite the weather and time of day.

“Obviously, getting the team here in Charlotte was great and I think it’s really grown the buzz in the city. Us soccer fans, that have been soccer fans for the long haul, we would have been excited for this World Cup no matter what. Now that Charlotte has a team, you can definitely sense there’s more of a buzz in the city, more people are coming out, really just getting into the sport,” Powers said.

His enthusiasm is shared by others, like Jeff Carpenter, who’s been following the USMNT for 30 years.

While sporting a hat styled like a cut-in-half soccer ball, Carpenter said he hoped Charlotte’s shown interest in the World Cup would prove its ability to host future matches.

“I’m just hoping that just the exposure for soccer, and for Charlotte FC, since they do have a team, that it would bring more international games during the summer to Charlotte,” Carpenter said.

“One thing our fans care about is obviously supporting marginalized communities. And, for us, soccer has a great way of bringing people together. And for us, it is always about giving back to the community and using soccer as a platform to build up those marginalized communities. So, that’s what we really focus on,” McIntosh said at Monday’s event.

The team will work with other fan and soccer groups to hold watch parties Friday and Saturday in Camp North End in Charlotte.

The USMNT will play again on Black Friday at 2 p.m. against England.