RALEIGH, N.C. (AP) — North Carolina advocacy groups and voters who this year persuaded state courts to overturn the legislature's congressional redistricting plan asked the U.S. Supreme Court on Friday to avoid hearing arguments on whether such courts must be curtailed in reviewing U.S. House maps.

Attorneys representing the state joined with outside lawyers to file four legal briefs with the justices urging them to reject a petition from Republican legislative leaders to take up the issue.

Through their own private lawyers, the GOP lawmakers already asked the court to formally rule on whether a provision in the U.S. Constitution delegating to state legislatures the manner of holding U.S. House elections means that state judges can't void congressional district lines created by the General Assembly.

The authors of Friday's filings say the Supreme Court has ruled before that some decision-making on congressional redistricting can be delegated by a state's citizens. The same holds true when the N.C. General Assembly passed laws two decades ago setting in place the authority of courts to review redistricting plans that they approved, the lawyers wrote.

State legislative leaders petitioned the justices in March, a week after the U.S. Supreme Court refused to prevent a congressional map adopted by a panel of three trial judges and upheld by the state Supreme Court from being used in this year's elections. 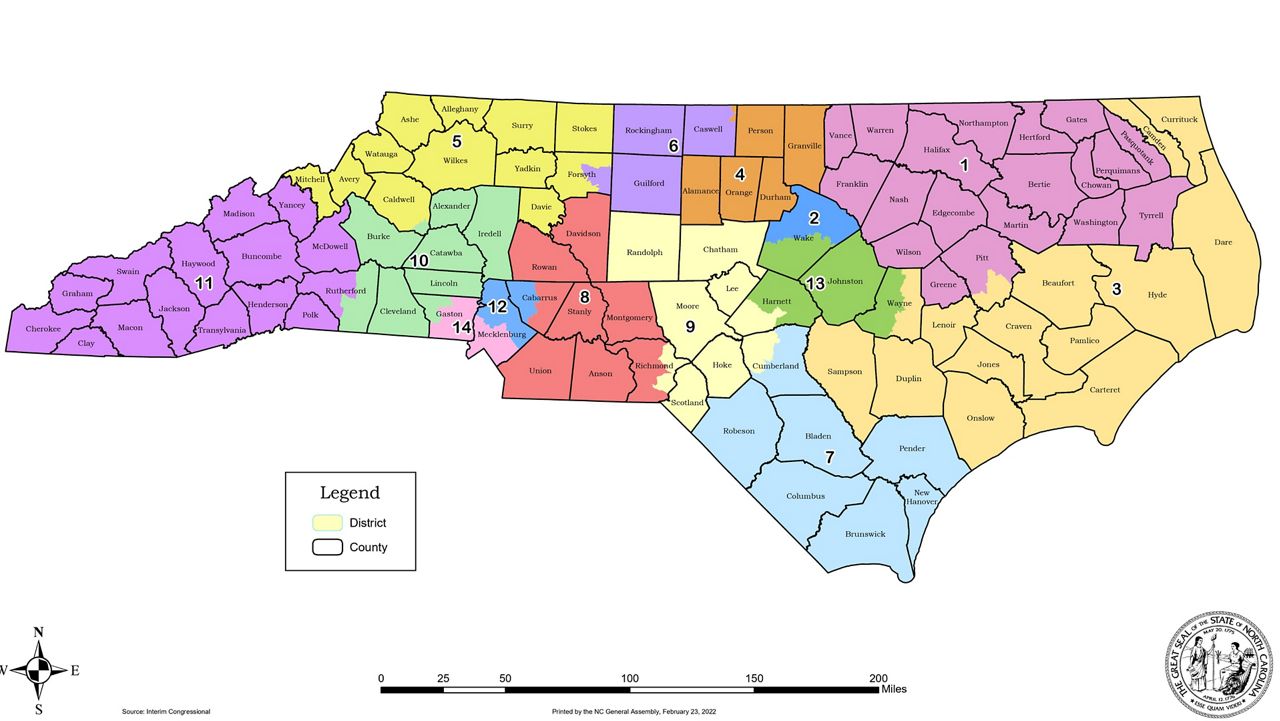 A congressional map adopted by a panel of three trial judges and upheld by the state Supreme Court is being used in this year's elections. (Image: N.C. General Assembly)

But four of the U.S. Supreme Court justices signaled they were open to revisiting the scope of state courts’ ability to alter congressional maps in the future. It's unclear when the court will decide whether to take up the case and hold oral arguments. A decision could have broad effects on elections and redistricting nationwide. Primary races were held this week based on the court-imposed maps for the 14 districts.

The map, which will be used for this year only, came about after the state Supreme Court in February struck down congressional boundaries approved by the GOP-controlled legislature. In a 4-3 decision, the court's Democratic justices declared the lines were partisan gerrymanders that violated the state constitution. The legislature tried its hand at a replacement plan, but the trial judges said it wasn't good enough and made adjustments.

The original map approved by the legislature in November most likely would have resulted in 10 seats for Republicans and four for Democrats. The court-ordered plan gives Democrats a good chance to win at least six seats this fall.

Attorneys for the legislative leaders wrote that the U.S. Constitution makes clear that congressional redistricting rests solely with state legislative bodies. A 1916 U.S. Supreme Court decision found that the Elections Clause does not repeal restrictions imposed by the people in state constitutions "to which state legislatures owe their existence,” reads the brief from the North Carolina League of Conservation Voters. The group was among those who challenged the General Assembly's original map in the fall.

“The U.S. Constitution does not grant impunity to a state legislature for violations of its state constitution simply because the legislation relates to congressional elections,” wrote lawyers representing Common Cause, another litigant. Lawyers representing the state come from a department led by Democratic Attorney General Josh Stein.