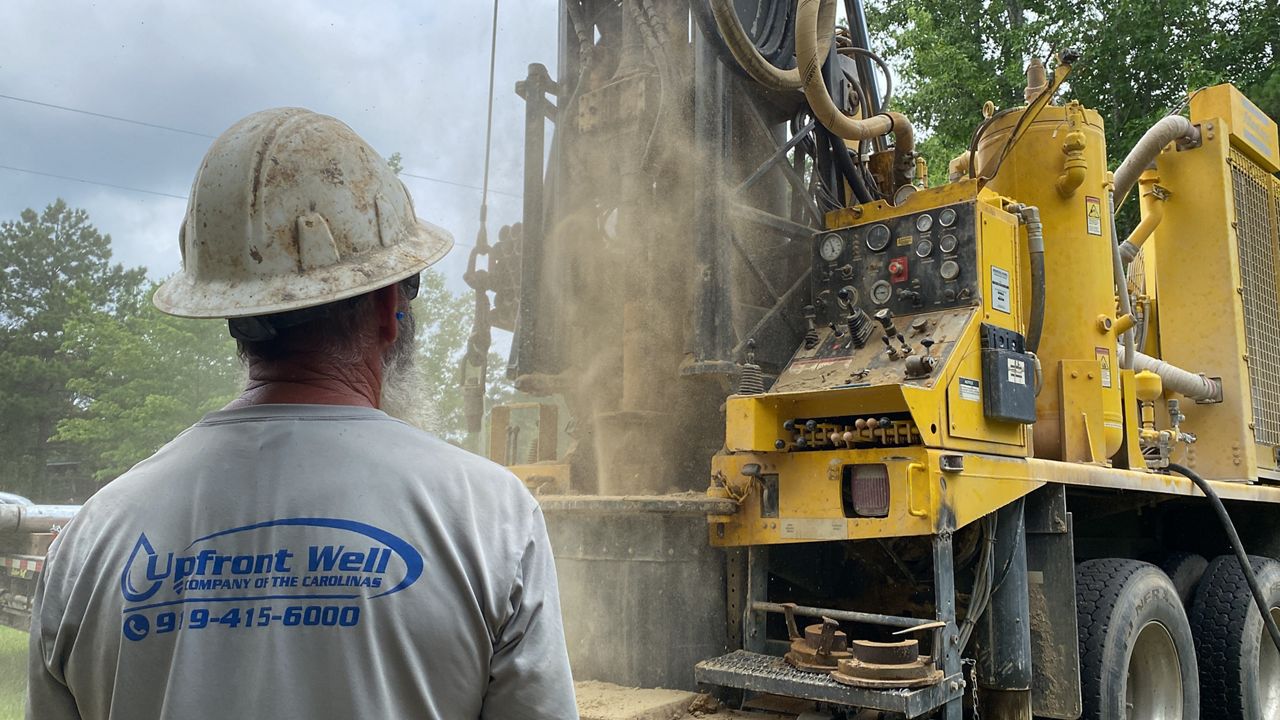 FRANKLIN COUNTY, N.C. — At the start of July, every county in North Carolina was experiencing some level of drought. Things have improved, but the dry conditions are still causing challenges for people who rely on well water, and it’s also creating more work for well drilling companies.

For a well driller, reaching water is like striking gold, especially when someone has been waiting months for their well to be dug deeper.

“They're very happy for us to show up, because they've been running out of water since October. That's how long it took us to get here just trying to catch up,” Felton Jacobs, the co-owner of Upfront Well Drilling of the Carolinas, said.

Jacobs has been drilling wells for decades.

“It's fun. Nobody's out here bothering me. We're in the wilderness most of the time. It's all good. I've been doing it since ’85,” Jacobs said.

It’s a dirty job, but someone has to do it, and lately his company has no shortage of business. In fact, they have a backlog of almost 80 jobs. Jacobs says the recent dry weather and new homes being built are impacting well water levels.

“The drought and all the new construction going on. New construction makes a big difference. If you have 20 wells in a subdivision and you are drilling them, some of these wells are going to go dry because you're drilling some deeper,” Jacobs said.

As more people tap into well water resources, Jacobs is seeing neighbors compete with each other to have their well dug deeper so they can access water quicker.

“If your neighbor’s is 400 feet and yours is 300 feet, water is going to his well,” Jacobs said. “That's the problem that we run into. ‘Come back and drill mine deeper.’”

On top of that, they can’t get materials and parts they need fast enough.

“We have two machines sitting because they broke down, waiting on probably a little $100 sensor, and we are losing $10,000 a day,” Jacobs said.

Jacobs shared a quote they priced out in October.

“The galvanized steel is $25, now it's 30. The price of the well is $15, and now we are charging $25. The fuel in the cost of everything right now, we are having to put it to the customer just like everybody else. It's a tough situation right now,” Jacobs said.

Jacobs says he’s worried the drought will only get worse and what that might do to people who rely on well water.

“The next thing we are going to get into, when Falls Lake dries up everyone's going to be screaming, and it's going to happen if it keeps staying like this,” Jacobs said.

According to the Army Corps of Engineers, which manages Falls Lake, even though we’ve seen drier-than-normal conditions, the water levels at Falls Lake are down less than a foot so far. Back in 2008, Falls Lake was more than 10 feet below normal and in danger of running dry.