A shooting was reported in the parking lot of Rodger's Bail Bonding Tuesday afternoon. Spectrum News 1

GASTON COUNTY, N.C. — Gastonia police are continuing to investigate the shooting death of a 14-year-old girl Tuesday, and police arrested a suspect in the case Wednesday.

Officers went to the 300 block of North Chester Street at about 1 p.m. for a medical call and found Nivia Danner suffering from a gunshot wound outside Rodgers Bail Bonding, according to Gastonia Police Department officials. The business is just a few blocks from the courthouse and detention center. 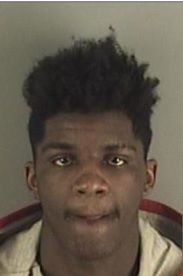 Detectives said 19-year-old Santonio Azanier Eskridge is a suspect Wednesday morning before his arrest in the afternoon. Authorities said they had warrants on charges of second-degree murder and possession of a gun by a felon prior to his arrest.

"The crowd that came was here to get someone out of jail, and it's unfortunate. I don't know what happened after that, it got kind of chaotic at the time. The car that came left, and that's when the police came and started doing their investigation," the owner of Rodgers Bail Bonding, Micholas Rodgers, said.

Danner was in a car outside the bail bond office when she was shot by Eskridge, who had been driving the car, authorities said.

"While the vehicle was parked in front of the business, and for reasons still under investigation, Eskridge shot Danner. After the shooting occurred, Eskridge and the vehicle that he was traveling in, fled the scene," Rick Goodale, GPD spokesman said in a news release.

Danner was taken to a hospital but died from her injuries.

On Tuesday, authorities said a 2013 or 2014 model, white Chevrolet Impala with temporary plates and a dent on the left part of the back bummer was seen leaving the area and is suspected in the shooting.

Detectives said they later found the car abandoned in a nearby county.

"Detectives continue to ask anyone with any information regarding this investigation to please call investigators at 704-854-6651," Goodale said in an update Wednesday afternoon.