CHARLOTTE, N.C. — A year after her son’s violent killing, a Charlotte mom continues to grieve and ask her community to do better.

“This is one of my coping mechanisms, coming here to this garden daily,” said Jamineka Davis, looking out over a garden on her family’s property.

It’s part of her daily routine, walking over to the garden and saying good morning to her son.

“It helps give me peace every day and helps provide serenity in my life,” Davis added.

The garden features a birthday sign, because here, her son’s birthday is every day.

“It’s so unfortunate that this is my memory of him every single day,” Davis said. “This is the pain that I deal with.”

It’s still difficult for Davis to talk about the killing of her 22-year-old son, Andre Boyd Junior. Junior, known to family and friends as AJ, was shot and killed in the summer of 2020. The memory which haunts Davis every day.

“It has not been easy. Every day is difficult,” Davis said.

Davis said AJ was killed on July 29, 2020. Two people have been arrested and charged with murder and armed robbery, according to the Charlotte-Mecklenburg Police Department. The two cases are still pending.

The grieving mom said one of her other sons used to be greeted by AJ at the school bus stop after school. Now, her son does not want to go. A grandparent who was used to AJ’s visits is now suffering declining health. And, they are all left with the memory of a painful July day.

“My life has been changed since July the 29th, I feel like I live that day every day I wake up,” Davis added.

The grief is intertwined in Davis’ personal life and work life. AJ wore many hats helping his mom and family at home and with the family business.

“Our maintenance tech, he also mowed the lawn, he made sure if I’m doing anything — as far as groceries, he was just such a gentleman, always wanting to make sure mommy is OK,” Davis explained with a smile.

Looking back, Davis said his absence has only made the work he did for his family more obvious.

“I don’t even think that he realized how many roles he really had, he was just that person,” she added.

On the anniversary of his killing, Davis held a candlelight vigil and balloon release for her son.

“He is forever missed,” Davis told the crowd after they released balloons.

“AJ was brutally murdered in the parking lot. And laid on the ground for hours, up until 5 p.m. he laid out there. On the ground. So, this means a lot that we are all out here sacrificing in the heat just like he did,” Davis continued. “There was no dignity at all, being brutally murdered and having to lay out there like that.”

Davis’ voice was shaking and she fought through tears as family and friends came to hug her and grieve with her as they remembered her son.

Davis and her family are not alone in their grief. AJ was part of a worrying trend in Charlotte last year, for families and police.

In 2020, Charlotte had an 18% increase in the number of homicides. In fact, more than 100 people were killed for the second straight year, according to CMPD data. 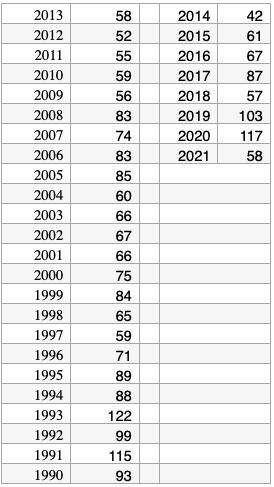 Charlotte's homicide count by year, according to CMPD

At the time of her son’s anniversary in 2021, Charlotte had recorded more than 55 homicides. However, it was a decline from the same time period in 2020, according to violent crimes division captain Joel McNelly.

McNelly said there might be a reason for the decline. This year, CMPD combined its gang unit, shooting into occupied dwellings unit, and trap unit into one to focus on gun crimes, according to McNelly.

“Any time people are shooting at a house, shooting at a car, shooting at people, ultimately, someone’s going to get hit. And, ultimately, we’re going to have homicides. So, by focusing in on the people who are actively engaging in gun crimes and shooting activity, we really hope to make an impact on crime and I think we’re seeing that this year,” McNelly said.

McNelly also said the department’s focus on community relationships helped increase the number of arrests in 2020 for violent crimes. McNelly pointed out the city of Charlotte has grown dramatically in both size and population since 1993.

“Even though those numbers, every single one is one too many, when we look at that with respect to our population, Charlotte is actually significantly below other cities that are comparatively sized,” McNelly added.

But, Davis said the community needs to be better at reaching young people before they turn to violence.

“Like the one who took my son’s life. I feel that if he had a positive role model in his life and had goals in his life, then he would have not went for violence,” Davis said.

Now, she works with an organization that helps other families deal with violent loss. She's helping to lead the charge to end bond for suspects accused of murder. Davis does her work in the hope that fewer and fewer Charlotte moms have to plant memory gardens for their children and spend a morning wishing a happy birthday with heartbreak.

“I put a sign here on his birthday,” Davis said back in the garden, “Which he turned 23 years old on March the 30th, and every day is my son’s birthday.”