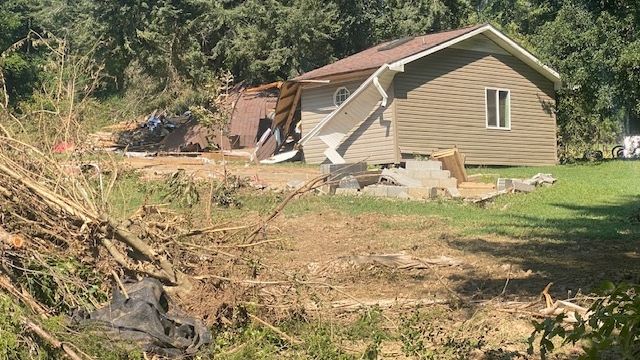 Homes were badly damaged in Cruso, N.C. due to Tropical Storm Fred.

HAYWOOD COUNTY, N.C. — The damage in Cruso is unbelievable, even for Keeth Willingham who thought he had seen it all. Willingham has been a program manager with Samaritan's Purse for the last five years.

"It's a calling, everybody's got a purpose, and my purpose is to go and love people well," Willingham said.

It's a calling that has taken him all over the world, but this disaster, only hours from his home, hits hard.

"When it's your neighbors, certainly it's a more special operation," Willingham said.

He's been on the ground in Cruso for days surveying the damage. On Thursday afternoon, emergency officials said one person remains missing following last week's storm, and the Haywood County Sheriff continued to warn against looting.

One home ended up in a cornfield hundreds of yards away. Some homes were condemned, but they can still help homeowners get their belongings. Other homes need major work to prepare to to rebuild.

Lt. Gov. Mark Robinson and other elected officials visited the hard-hit region Thursday and spoke about the sights they saw after touring the area.

"I'm amazed by two things. Number one, the pictures that you see on your television screens and that you may see on social media and other places, do not do justice to the devastation that has happened in this community," Robinson said. "The second thing that's amazing is how the community and community leaders have pulled together and have made the rescue attempts possible and the relief efforts possible."

Robinson and other leaders vowed to continue to help communities in their efforts to rebuild. Travis Donaldson, Haywood County emergency services director, also walked with FEMA officials Thursday to survey the damage.

In Clyde, work isn't hard to come by. Volunteers were there tearing out floors, sheet rock, packing up boxes of food to keep safe and working hard to make it easier for these families.

"Volunteers love what they do. They love serving the homeowners, they love sharing their faith and letting people know they are not alone," Willingham said.