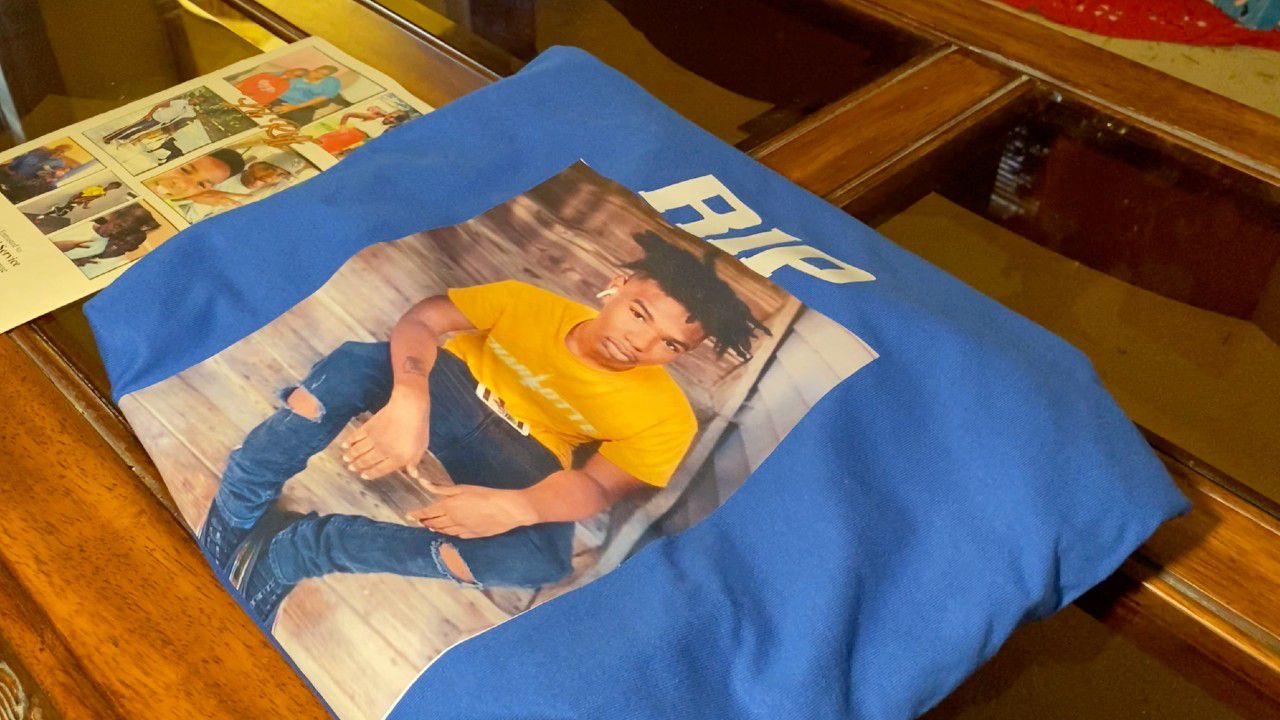 CHARLOTTE, N.C. — It’s a record no one in Charlotte wanted to break.

However, Charlotte Police Lieutenant Bryan Crum says a simple look at the numbers does not tell the full story.

“My investigators, every day, are dealing with their families, they’re talking to their families, the secondary victims. I mean the impact of a homicide can’t be measured in a number. I mean these are loved ones who are lost to people,” Crum said at a press conference near the end of 2020.

Across town, one Charlotte family agrees with the Lieutenant and is begging for change.

Shalisha Hardwrich lost her cousin just a few weeks before Christmas. As she looked through a t-shirt bearing his face and pamphlet from his memorial service, all there was left to do was cry.

“It is far more than just another number in Charlotte. This is somebody’s family. This is a child,” Hardwrich says through frustrated tears.

Hardwrich’s cousin, Sharrieff Jones Jr., was shot and killed in a home in mid-December, making him one of the 122.

His smile could light up a room, he was smart, loyal, and loved to rap and play sports, according to family. Now, he’s a memory and another heartbreaking example of a future that will never be realized.

“You know the community is crying because, you know, these are the youth, these are the potential doctors or lawyers, or whatever they may be. It’s taken away from them because he was only 17 years old,” Hardwrich says on her couch.

Jones Jr.’s aunt, Tanya Porter, says the recent crimes are symbolic of a larger problem, which she is begging the community to fix.

“It’s not fair he’s not here with us anymore because of gun violence. There should be another way to solve these issues. It’s not about shooting and killing all the time. Just please stop. Please. Find a different way to solve your problems, we just hurt,” says Porter.

Even through their grief, Porter and Hardwrich say another family is grieving too, the family of the alleged shooter in Jones Jr.’s case.

“Another life is gone, one that can’t come back, and then another one’s potentially going to spend the rest of his behind bars. That’s two families affected,” Hardwrich adds while shaking her head.

Charlotte Police say they arrested and charged an 18-year-old for Jones Jr.’s death. He’s been charged with second-degree murder.

As the numbers reflect, Jones Jr.’s loved ones are just one of many families struggling with what happened and how to move on.

At a park in Uptown, Brandon Brown and Sevhn Doggette are organizing marches against violence to deal with their grief and frustration.

Brown, a self-described assistant to Doggette’s cause, says the 2021 New Year rang hollow as his social media feeds were filled with memorials.

“I lost my son August 8, 2017 to senseless gun violence on Independence at Diamond Image Cuts, he was sitting in his car. And, my son was brutally murdered and taken away from me,” Doggette says while walking in the park.

Her organization, MM2K, was founded after the death of her son and aims to help families grieving the violent loss of a loved one.

However, besides organizing marches to protest violence, there’s another cause near and dear to Doggette’s heart.

“These monsters have taken their children or their loved one and they are released on bond to go and have a happy holiday with their families and we’re no longer able to have a holiday, birthday, Thanksgiving, a Christmas with our loved one. And so, I stand firmly on no bond for murder,” Doggette says.

She describes herself and other parents like her as, "angel moms and dads", adding her mission now is to help mothers and fathers rebuild after tragedy.

“It is a life sentence for us, angel moms and dads, that are losing children or loved ones to gun violence or a violent crime,” Doggette says simply.

It’s a sentence with no chance at parole, no matter how many years served in pain.