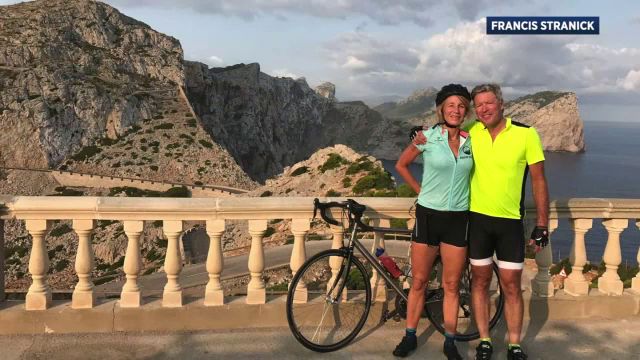 CHARLOTTE, N.C. -- A local physician in Charlotte is making a desperate plea for drivers to pay attention on the road.

“It is beyond a tragedy, that this beautiful woman, was taken from us,” husband and father Francis Stranick said.

Stranick says some days are tougher than others, particularly special events like his daughter’s graduation at the University of Virginia.

“At UVA when the kids graduate they all have these balloons and so I didn’t know what Sarah was going to have,” Stranick said. “When I saw her she had this balloon that was a sun with a big smiley face on it. I said oh, what is that. She said that is mom walking with me.”

Dealing with those moments can be tough. Stranick says one way he got through it was to continue riding his bike. But, then in June he while riding near Myers Park High School Sranick says he was set back in his tracks.

“I slowed down and at the last second she pulled right in front of me and I smashed into the side of her car,” Stranick said.

Luckily, Stranick said he had minor scrapes, but he knew from that moment forward he wanted to do something. He started supported groups like Sustain Charlotte.

Program Director, Meg Fencil, says the organization is pushing for more protected bike lanes throughout the city like the one on 6th Street.

“A protected bike lane is also a very strong visual cue that people driving cars, they need to stay in their lane,” Fencil said.

The lanes may help, but Stranick says it really comes down to drivers paying attention.