GREENSBORO, N.C. — The students huddled around, leaning in as the milling machine began shaving steel from the block, cutting precisely the right shape for a machine part. Machining Instructor Derek Seeke talks them through what’s happening as one student runs the controls.

Seeke and a half-dozen students watch the machine run in one corner of the cavernous Center for Advanced Manufacturing at Guilford County Technical Community College. There are rows of equipment, it almost looks like a factory floor. Students here are training to be part of North Carolina’s emerging manufacturing economy.

The new factories in North Carolina don’t make cigarettes or textiles, they’ll be making batteries for electric cars or pharmaceuticals.

Since the start of 2022, North Carolina has seen a slew of big economic development announcements.

Late last year, Toyota announced plans to build a new factory for electric vehicle batteries not far from GTCC’s Center for Advanced Manufacturing. The Toyota factory is a $1.3 billion project and will eventually create 1,750 jobs at the Greensboro-Randolph Megasite in neighboring Randolph County, the company said.

Seeke said that when the battery factory opens, he will have students ready to start work there.

“Toyota has machines that we don’t have,” he said. So his department will work with Toyota to get the right brands of equipment to start training up students so they will be prepared for the jobs.

Having the right workforce was a key part of attracting Toyota to North Carolina.

“North Carolina offers the right conditions for this investment, including the infrastructure, high-quality education system, access to a diverse and skilled workforce, and a welcoming environment for doing business,” Ted Ogawa, CEO of Toyota Motor North America, said in December when announcing the new factory.

Having trained workers was a big part of Boom Supersonic’s decision to make its new jets in Greensboro, too.

“With some of the country’s best and brightest aviation talent, key suppliers, and the state of North Carolina’s continued support, Boom is confident that Greensboro will emerge as the world’s supersonic manufacturing hub,” Blake Scholl, founder and CEO of Boom Supersonic, said earlier this year. 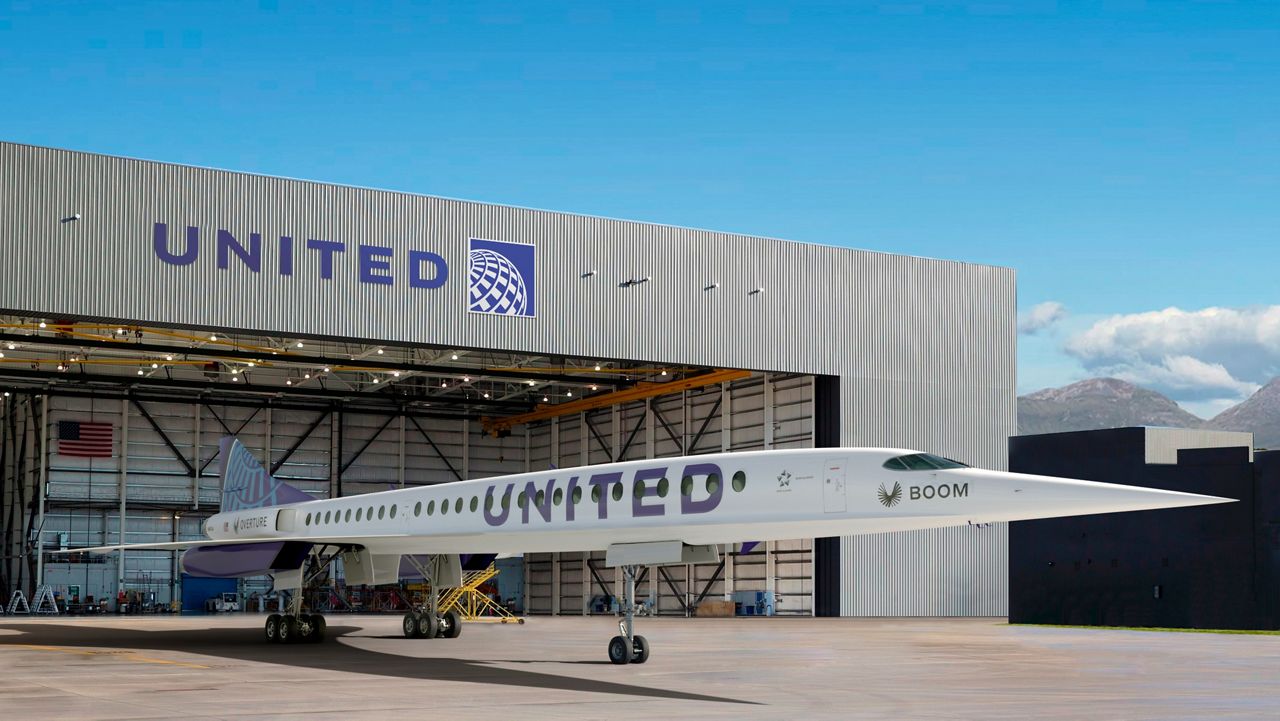 ‘We fuel the job engine’

Bringing the new supersonic jet manufacturing site to North Carolina involved a number of state agencies, including the Governor’s Office, the Commerce Department and the community college system, according to Gov. Roy Cooper. The community colleges were just one part of attracting the company to Piedmont Triad Airport, but having trained workers is key to bringing in these massive projects.

In addition to the Center for Advanced Manufacturing, GTCC also has an aviation maintenance program right next to PTI Airport.

“We’ve been involved in the courting process, the economic development process, doing presentations to the companies and letting them know how we can support the workforce,” GTCC President Anthony Clarke said. His college is getting ready to scale up its programs to help staff, both at the Toyota plant and Boom Supersonic.

“We have meetings planned with both companies to help us start to talk about what jobs, what competencies they need. But I’m confident, for both Toyota and for Boom Supersonic with our long history in aviation, that we’re going to be able to provide the skilled workforce that they’re looking for,” Clarke said.

He said the school already has 400 students in its aviation program and hopes to increase that number to 600 in the coming years.

For the Toyota plant, Clarke said his staff has been working with Randolph County Community College to make sure Toyota will have the skilled workers it needs to fill 1,750 jobs in the coming years.

“Workforce is one of the key things that companies look for when they come to an area,” he said.

It’s not just GTCC, all of North Carolina’s 58 community colleges work closely with companies and economic development officials to tailor training to the needs of employers.

“The North Carolina Community College System works extremely close with business and industry,” he said. “We are always a key partner in the recruitment process with new industry.”

That’s been part of the community colleges’ strategy for decades, to tailor programs to train the workers companies need. And the state puts millions of dollars into that strategy.

“Our long-term strategy and continuing strategy is to ensure that the community college system is innovative, that it is nimble, and that it is meeting the needs of our business and industry partners,” he said.

At GTCC, that nimble approach has paid off. The college runs an apprenticeship program for students who can work and go to school, with employers paying them while they’re on the job and in the classroom. 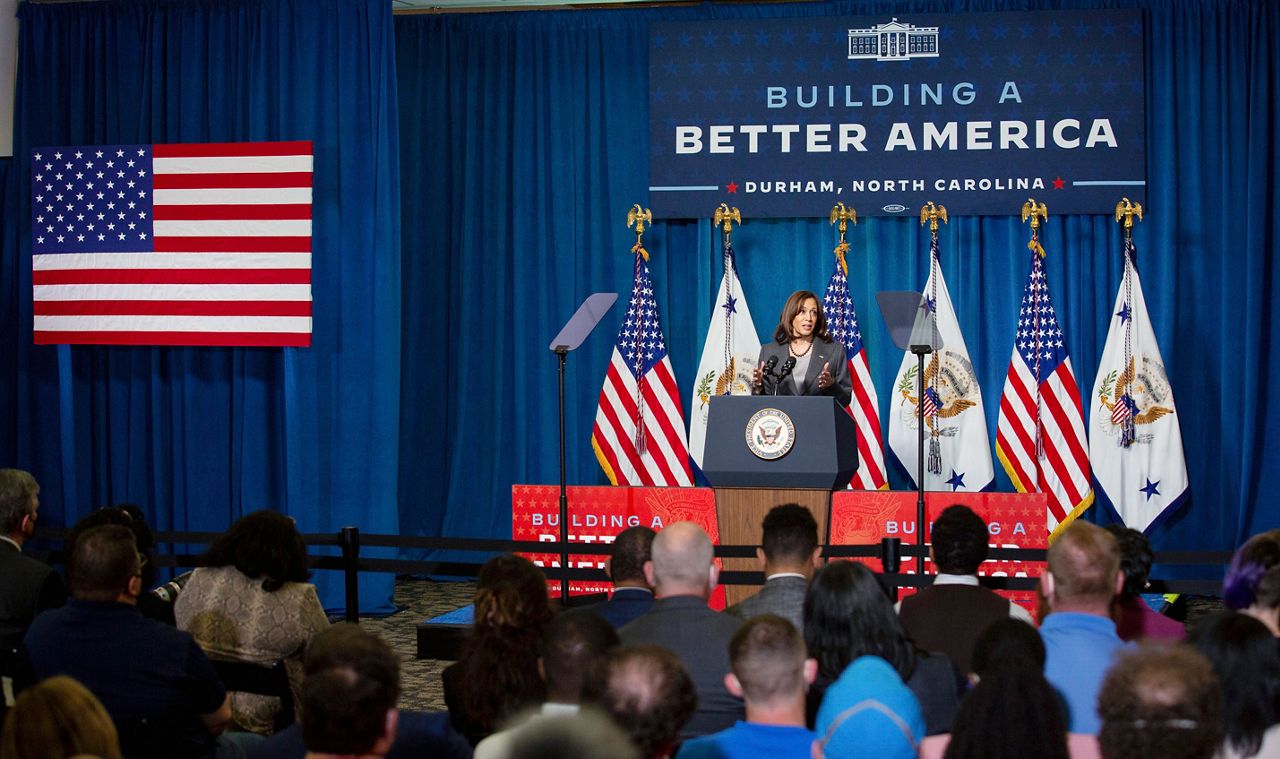 The next day, Vice President Kamala Harris and Labor Sec. Marty Walsh flew down to North Carolina to visit Durham Technical Community College. The pair, flanked by the governor and elected leaders from the area, toured a union apprentice program teaching students to be electricians in the Triangle’s booming construction industry.

The labor secretary said community colleges like Durham Tech “are the engines of equity in higher education, and they are the key to growing our middle class by creating pathways, school to career, for American students.”

Speaking to about 100 people at the college, Walsh announced a new federal grant program to give $45 million to community colleges around the country.

“This program will help community colleges strengthen and connect people to training,” he said. “This new fund will focus on areas like women, workers of color and marginalized communities that have been shut out from too many opportunities in the past.”

“North Carolina’s community colleges are our not-so-secret weapon when it comes to building a talented workforce, and Longleaf Commitment grants are helping to make education and training more accessible and affordable,” Cooper said. The governor visited Central Piedmont Community College Thursday to highlight the grant program.

“These grants are already helping North Carolinians get the skills they need by making community college debt-free, and I encourage all eligible graduating high school seniors to take advantage of this funding,” he said in a statement.

“Education translates into opportunity, and with this grant, we are excited to provide more opportunity to our diverse student populations across the state,” said Stith, the community college system president. “North Carolina’s ‘Great 58’ community colleges are essential to the state’s economic recovery efforts and are well poised to prepare the workforce needed today and tomorrow.”

“Receiving the Longleaf Commitment grant has meant a lot to me. I am able to use this grant to cover any additional costs to finish my degree,” Leila Turner, Central Piedmont Community College student and Longleaf Grant recipient, said in a news release from the governor’s office.

“I am grateful to have this opportunity, and I look forward to continuing to focus on my studies without any financial stress,” Turner said.