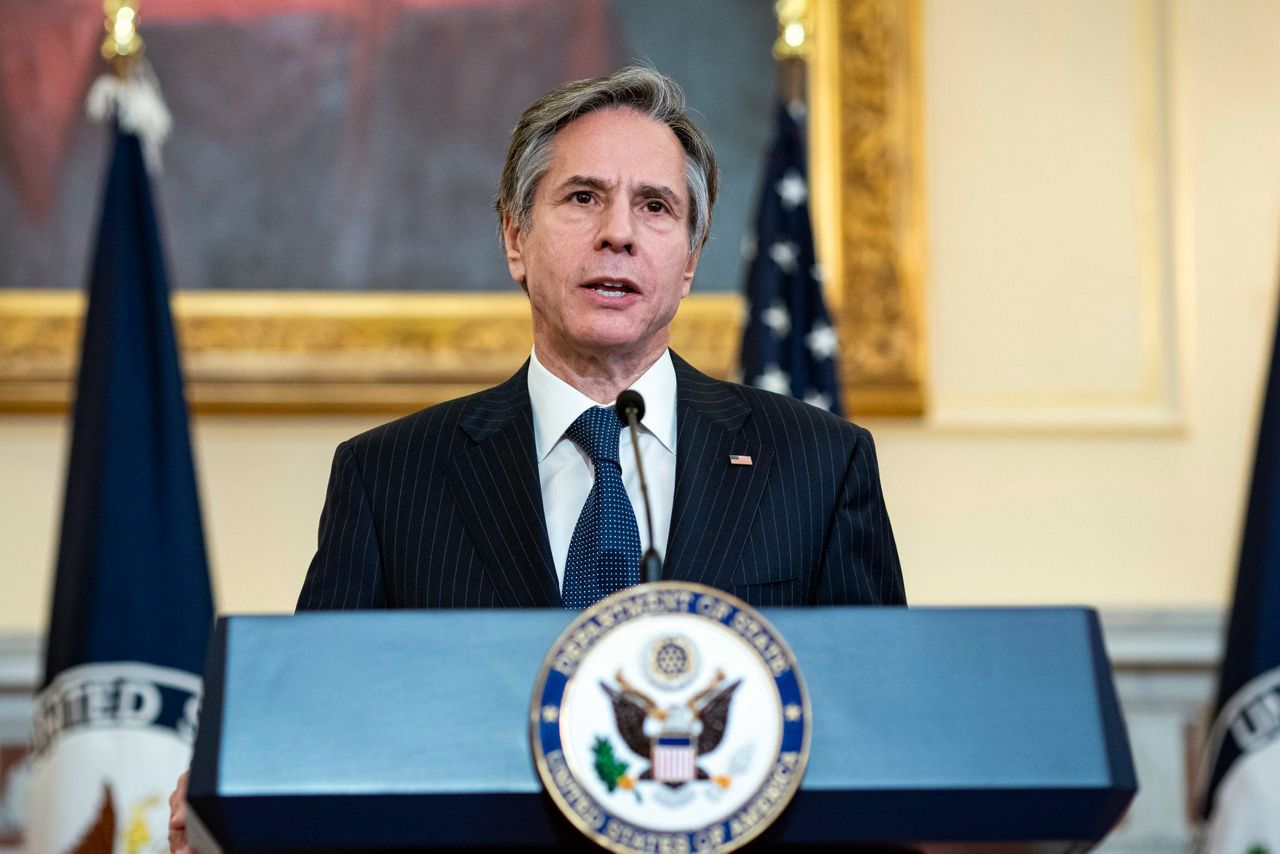 1 of 2
Secretary of State Antony Blinken announces his appointment of Gayle Smith as the new State Department Coordinator for Global COVID-19 Response and Health Security as he speaks about U.S. leadership in fighting the coronavirus pandemic at the State Department in Washington, Monday, April 5, 2021. (Al Drago/Pool via AP) 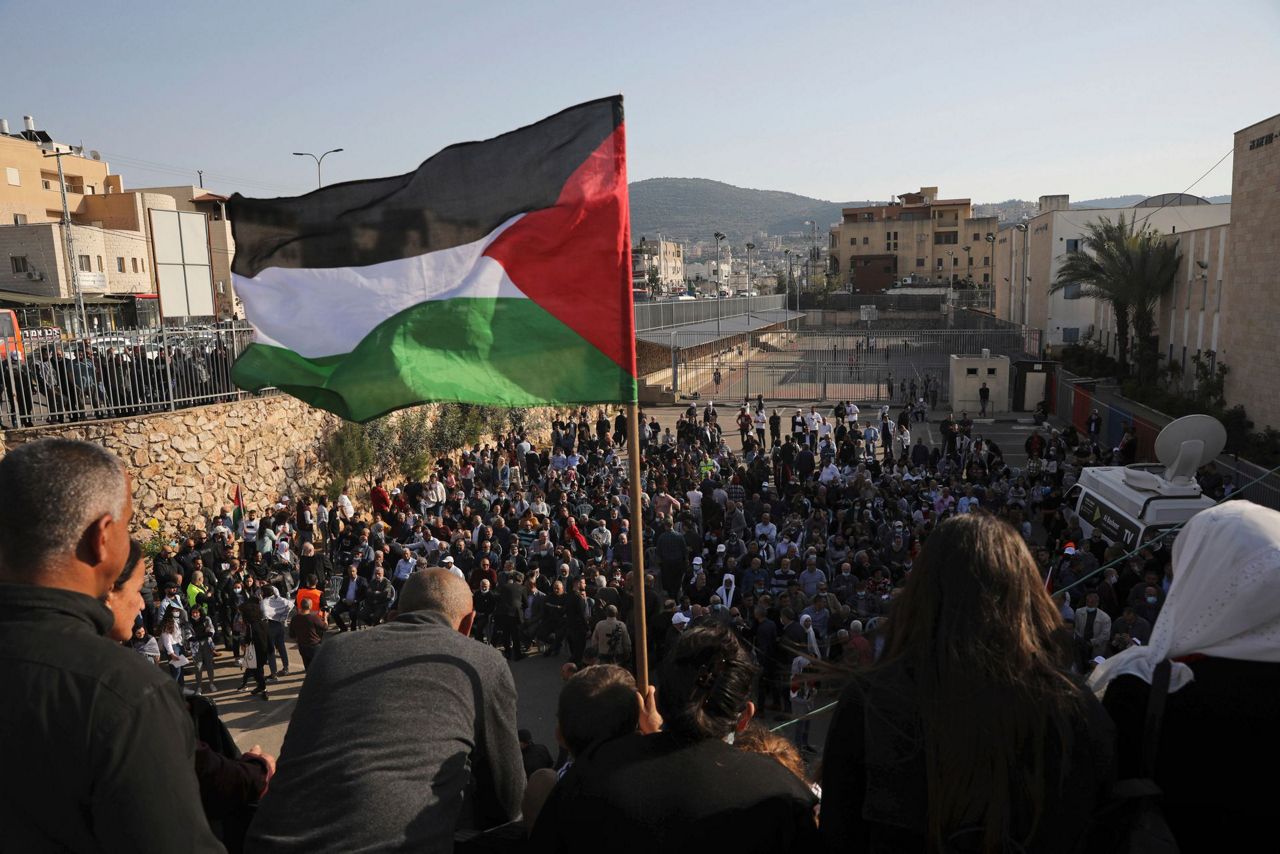 2 of 2
A Palestinian flag flies over the annual Land Day rally in the Arab city of Arraba, northern Israel, Tuesday, March 30, 2021. Land Day rallies by Palestinians protest what they say are discriminatory policies and to commemorate the deaths of six Arab protesters who were killed by police on March 30, 1976, while demonstrating against an Israeli plan to confiscate Arab land. (AP Photo/Mahmoud Illean)

US boosts aid to Palestinians as some in Congress cry foul

WASHINGTON (AP) — The Biden administration is moving again to increase U.S. assistance to the Palestinians as it fires up a new Mideast policy that is directly opposite of the one pursued by its predecessor.

“Supporting an enduring solution to the Israeli-Palestinian conflict is a core U.S. national security objective,” the State Department said in the notification, which was dated April 2 but transmitted only on Monday. “As an essential part of this effort, U.S. government assistance seeks to build professional and accountable security and criminal justice institutions that maintain security and stability in the West Bank, uphold the rule of law, contribute directly to regional security, and protect the population.”

The Biden administration has made no secret of its belief that former President Donald Trump’s approach to the Mideast, which alienated the Palestinians, was flawed and made prospects for peace less likely. The new assistance appears aimed at encouraging the Palestinians to return to negotiations with Israel, though there is no indication it will have that effect and Israel has yet to weigh in publicly.

The newly allocated $40 million comes on top of $75 million in assistance for infrastructure, health and civil society groups the administration told Congress about on March 28 and $15 million in coronavirus assistance it announced a day earlier.

The administration is also expected as early as this week to announce a resumption in funding to the U.N. agency that deals with Palestinian refugees, the United Nations Relief and Works Agency. The Trump administration had slashed funding to the Palestinians to almost nothing and ended support for the U.N. agency as it adopted a staunchly pro-Israel approach in its handling of the Middle East.

Former Secretary of State Mike Pompeo and former U.S. Ambassador to the United Nations Nikki Haley had championed the removal of funding for the relief agency, suggesting it was responsible for perpetuating Palestinian poverty and questioning whether all of the millions of people it serves are actually refugees.

Just a week before leaving office, Pompeo accused UNRWA of being “riddled with waste, fraud (and) concerns of support to terrorism" and said there are fewer than 200,000 legitimate Palestinian refugees still alive.

Pro-Israel lawmakers are signaling opposition to the renewed funding, noting in particular that federal laws prohibit direct assistance to the Palestinian Authority or the provision of aid that benefits the PA as long as it continues to pay stipends to people convicted of anti-U.S. or anti-Israel attacks and their families.

Already, a handful of Republicans are preparing to challenge the aid, maintaining that it violates the so-called Taylor Force and the Anti-Terrorism Clarification acts, both of which passed with strong bipartisan support.

The resumption of assistance comes days after the nonpartisan Government Accountability Office issued a report that found the U.S. government had not properly vetted all of its Palestinian funding recipients for U.S. antiterrorism criteria as required by law between 2015 and 2019, when Trump severed most of the aid.

While it said the U.S. Agency for International Development had followed the law with respect to people and groups it funded directly, it had not done the same with entities, known as sub-grantees, to which those groups then distributed taxpayer dollars. “If funding resumes, we recommend measures to improve compliance,” said the GAO report, which was released last week,