NEWSLETTERSign Up For Our Daily Newsletter: Coronavirus in North Carolina
WATCH NOWExploring Your Health with Erin Billups
PODCASTNASCAR is the first major sport to return to action! Hear how it's handling the comeback and what challenges the drivers face on this week's 'Tying it Together'!
Salute to GradsTell us about a 2020 graduate 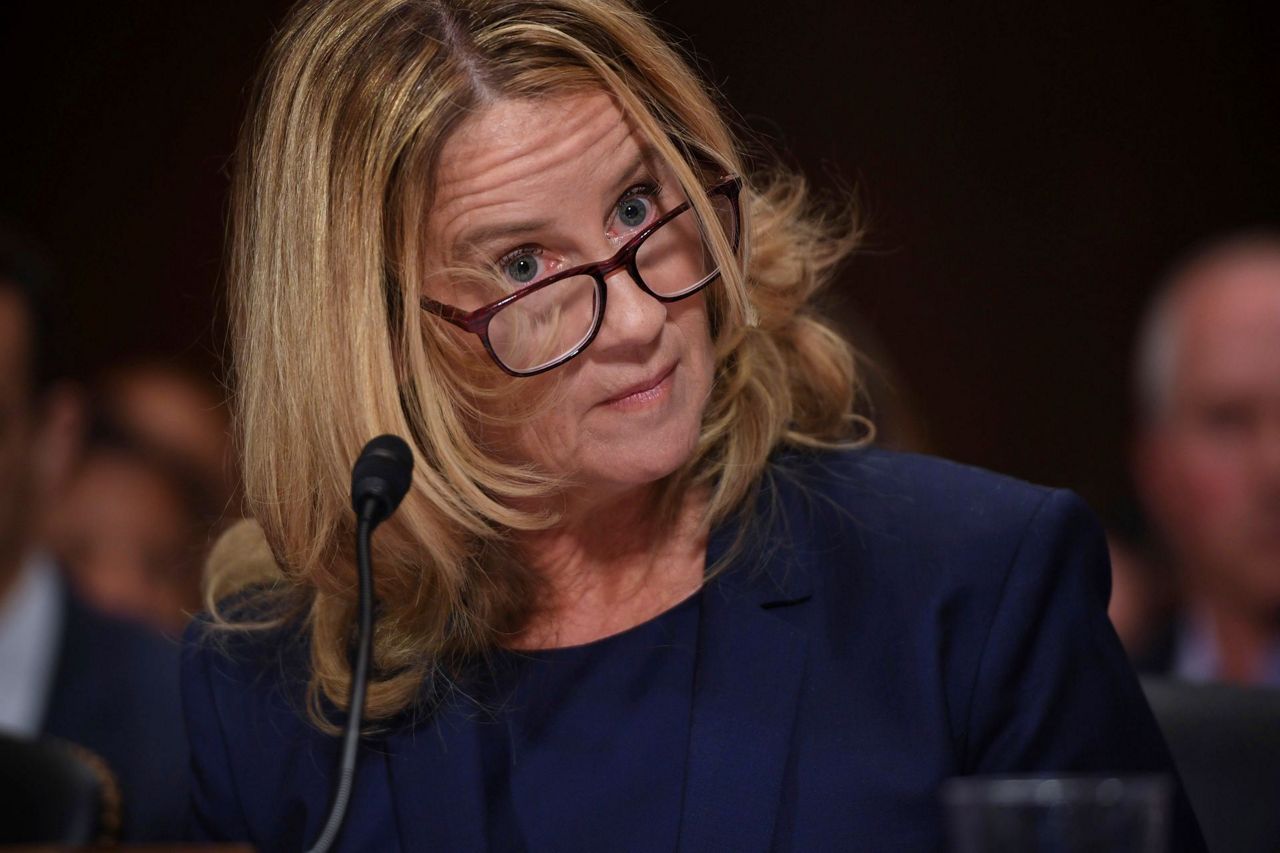 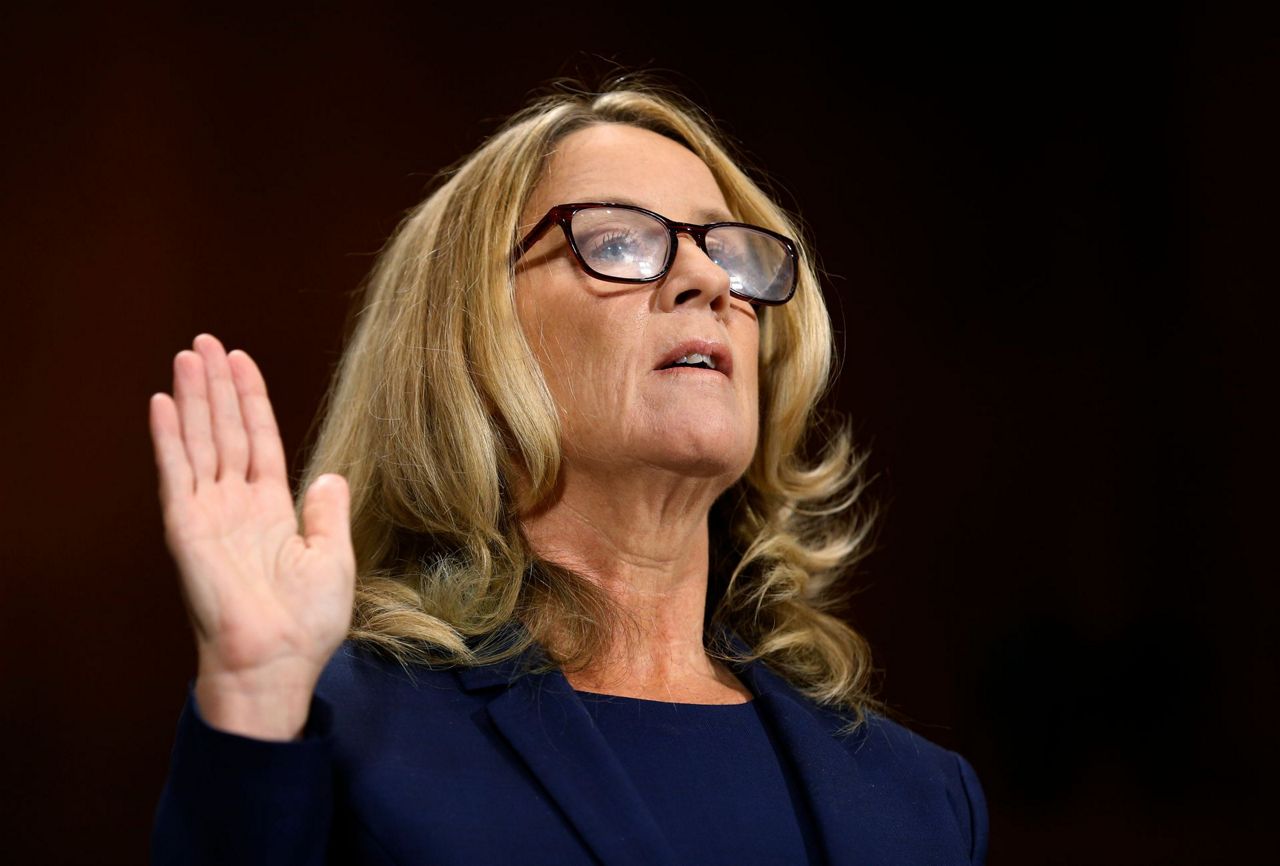 2 of 7
Christine Blasey Ford is sworn in before the Senate Judiciary Committee, Thursday, Sept. 27, 2018 on Capitol Hill in Washington. The Senate Judiciary Committee will hear from Supreme Court nominee Brett Kavanaugh and Christine Blasey Ford, the woman who says he sexually assaulted her. (Michael Reynolds/Pool Image via AP) 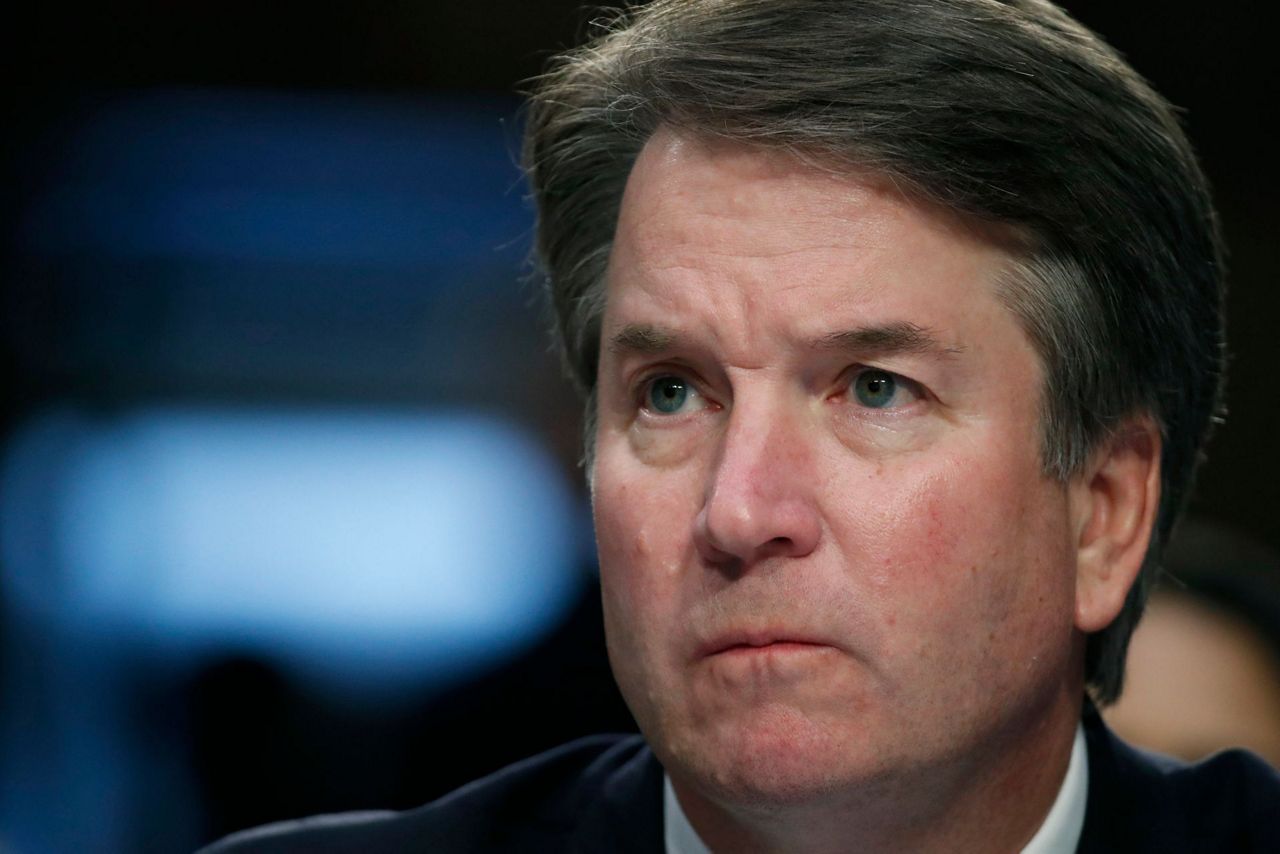 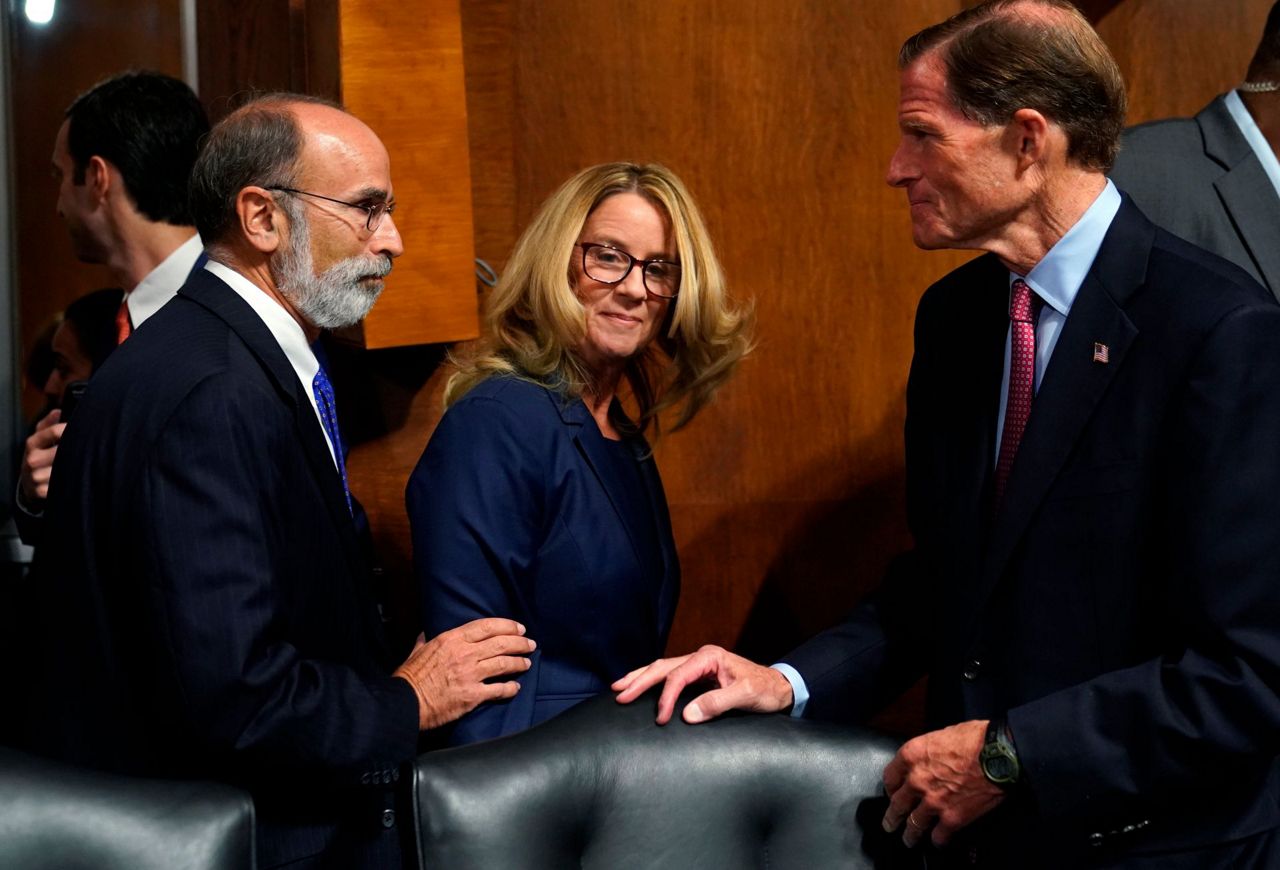 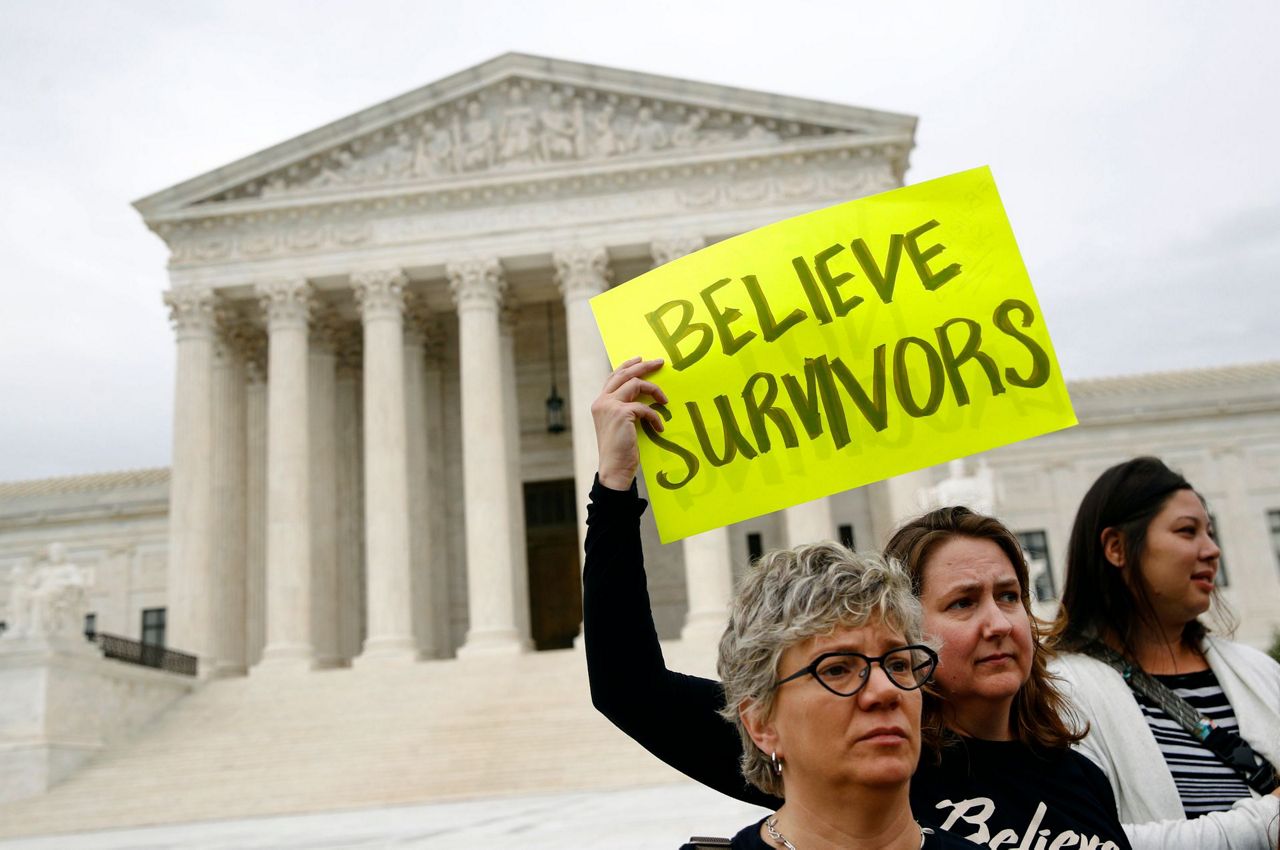 5 of 7
Protesters gather in front of the Supreme Court on Capitol Hill in Washington, Thursday, Sept. 27, 2018. The Senate Judiciary Committee is scheduled to hear from Supreme Court nominee Brett Kavanaugh and Christine Blasey Ford, the woman who says he sexually assaulted her. (AP Photo/Patrick Semansky) 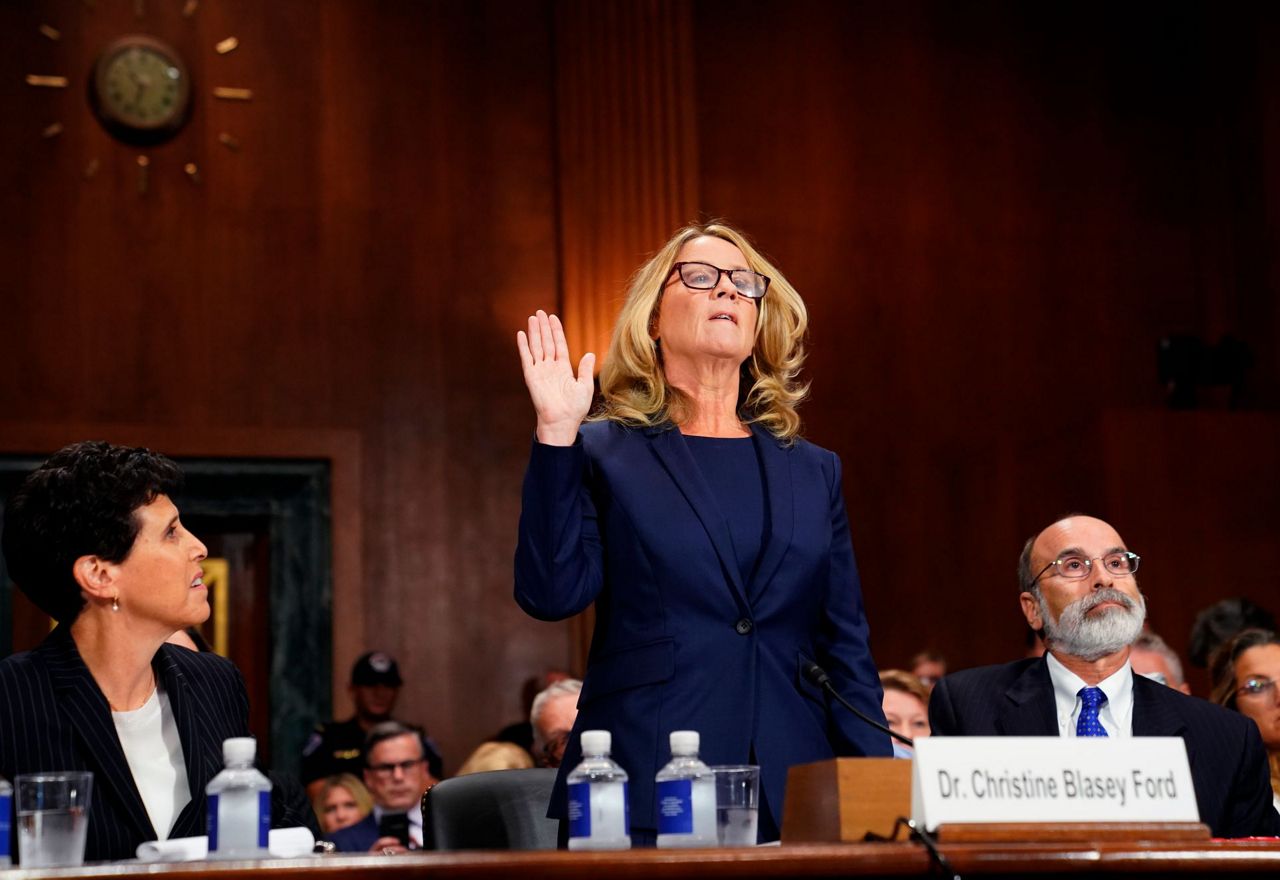 6 of 7
Christine Blasey Ford is sworn in to testify before the Senate Judiciary Committee on Capitol Hill in Washington, Thursday, Sept. 27, 2018. Her attorney's Debra Katz and Michael Bromwich watch. (AP Photo/Andrew Harnik, Pool) 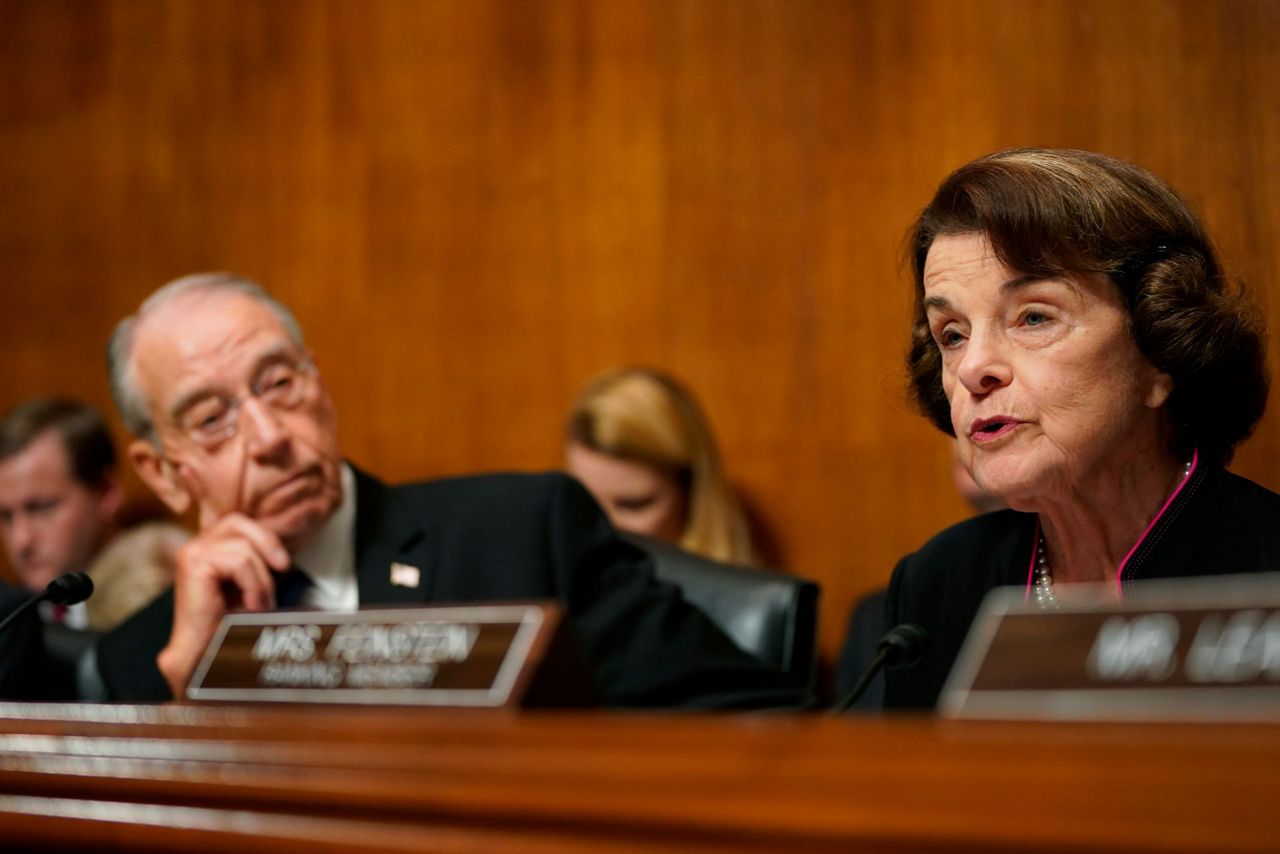 WASHINGTON (AP) — Christine Blasey Ford told the Senate Judiciary Committee and a riveted nation Thursday that Brett Kavanaugh sexually assaulted her in a locked room at a 1980s high school gathering, as the panel began an extraordinary hearing at which Kavanaugh hoped to salvage his Supreme Court nomination.

"I believed he was going to rape me," said Ford, 51, her voice breaking. Expressing certainty that Kavanaugh was her attacker, the California psychology professor explained how the brain remembers traumatic events. "Indelible in the hippocampus is the laughter, the uproarious laughter of the two," she said, referring to Kavanaugh and a friend who was with him.

Kavanaugh now 53, has denied Ford's and other women's allegations of sexual misconduct, in a clash that has underscored America's political and cultural fault lines. But the accumulating accusations have raised questions about whether Republican leaders will be able to hold GOP senators behind President Donald Trump's nominee.

The conservative jurist, whose Senate confirmation had seemed assured until Ford and the other women emerged, awaited his own chance to testify later in the day.

With millions watching on television, Ford told the top committee Democrat, California Sen. Dianne Feinstein, that she'd "agonized daily" over coming forward about the alleged decades-old attack. She said she feared the personal consequences would be akin to "jumping in front of a train."

In fact, both she and Kavanaugh have received death threats.

Republicans have challenged Ford's and the other women's allegations, in part because it took them years to come forward. But when Feinstein asked her how she could be sure that Kavanaugh was the attacker, Ford said, "The same way I'm sure I'm talking to you right now."

The Judiciary panel's 11 Republicans — all men — were letting Rachel Mitchell, a veteran sex crimes prosecutor from Arizona, ask their questions. She began by expressing sympathy for Ford, saying, "I just wanted to let you know, I'm very sorry. That's not right."

Mitchell led Ford through a detailed recollection of the events she says occurred on the day of the alleged incident. But under the committee's procedures, the career prosecutor was limited to five minutes at a time, interspersed between Democrats' questions, creating a choppy effect as she tried piecing together the story.

Before she began, committee chairman Chuck Grassley of Iowa defended the Republicans' handling of the confirmation proceedings so far. Feinstein criticized Republicans who have rejected Democratic demands to slow Kavanaugh's confirmation process and let the FBI investigate all the allegations, saying, "What I don't understand is the rush to judgment."

Kavanaugh and Ford were the only witnesses invited to testify before the panel. But the conservative jurist is facing allegations of sexual misconduct from other women as well, forcing Republican leaders to struggle to keep support for him from eroding.

Grassley complained that lawyers for other accusers have not provided information to his panel and said, "The committee can't do an investigation if attorneys are stonewalling."

Republicans acknowledged that much was riding on Kavanaugh's performance. Even Trump, who fiercely defends his nominee, said he would be watching and was "open to changing my mind."

Kavanaugh's teetering grasp on winning confirmation was evident when Sen. Susan Collins, R-Maine, expressed concern, in a private meeting with senators Wednesday, about a new, third accuser, according to a person with knowledge of the gathering. Republicans control the Senate 51-49 and can lose only one vote. Collins is among the few senators who've not made clear how they'll vote.

Collins walked into that meeting carrying a copy of Julie Swetnick's signed declaration, which included fresh accusations of sexual misconduct against Kavanaugh and his high school friend Mark Judge.

Collins said senators should hear from Judge. After being told Judge has said he doesn't want to appear before the committee, she reminded her colleagues that the Senate has subpoena power.

Republicans are pushing to seat Kavanaugh before the November midterms, when Senate control could fall to the Democrats and a replacement Trump nominee could have even greater difficulty. Kavanaugh's ascendance to the high court could help lock in a conservative majority for a generation, shaping dozens of rulings on abortion, regulation, the environment and more.

Republicans also risk rejection by female voters in November if they are seen as not fully respecting women and their allegations.

Meanwhile, the lawyer for Deborah Ramirez, who says Kavanaugh exposed himself to her at a party when they attended Yale University, raised her profile in a round of television interviews.

Moments before committee chairman Grassley gaveled his panel into session, Ramirez tweeted her support for Ford: "They want us to feel alone and isolated but I'm there wrapping my arms around you and I hope you feel the people of this nation wrapping their arms around all of us."

Ford told the committee that, one night in the summer of 1982, a drunken Kavanaugh forced her down on a bed, "groped me and tried to take off my clothes," then clamped his hand over her mouth when she tried to scream before she was able to escape.

Kavanaugh is being challenged on multiple fronts by his accusers, former classmates and college friends. They say the good-guy image he projects in public bears little relation to the hard-partying behavior they witnessed when he was young.

In his prepared testimony, he acknowledged drinking in high school with his friends, but said he'd never done anything "remotely resembling" what Ford describes. He said he never had a "sexual or physical encounter of any kind" with her.

He also provided the committee with detailed calendar pages listing in green-and-white squares the activities that filled his summer of 1982 when he was 17 years old — exams, movies, sports and plenty of parties. That's the year when Ford says she believes the assault occurred.

Nothing on the calendar appears to refer to her.

Ford released sworn statements from people who said she had told them about the assault in later years.

Late Wednesday, the committee released a flurry of other documents of unclear significance.

Transcripts of private interviews with committee investigators show they asked Kavanaugh about two previously undisclosed accusations received by Senate offices. One came in an anonymous letter sent to the office of Sen. Cory Gardner, R-Colo., describing an incident in a bar in 1998, when Kavanaugh was working for the independent counsel investigating President Bill Clinton. The other accused Kavanaugh of sexual misconduct in college. Kavanaugh denied them both.

Copyright 2018 The Associated Press. All rights reserved. This material may not be published, broadcast, rewritten or redistributed.