MILWAUKEE— A Milwaukee native is making hiss-tory as the first Latino to portray Old Deuteronomy in “Cats.”

Indalecio De Jesús Valentín takes on the iconic leading role in the 40th anniversary tour of “Cats,” playing at the Marcus Performing Arts Center through May 15.

“Cats” follows a tribe of cats, known as the “Jellicles.” Once a year, the clan of kitties makes the “Jellicle choice,” deeming one cat to be reborn and have a new life. Old Deuteronomy is the well-respected, elder cat who makes the ultimate selection.

We caught up with Wisconsin’s home-grown star before the show’s run in Wisconsin.

Spectrum News 1: You grew up in Milwaukee and attended UW-Milwaukee to earn your BFA. You've also performed localy, with Skylight Music Theatre, Greendale Music Theatre and others. What's it like coming home for this show?

Spectrum News 1: Tell me about your performance experiences growing up in Milwaukee.

De Jesús Valentín: I never got any experiences like [performing with youth theater groups], unfortunately. That wasn't a privilege that I had. [My high school did] not like to focus on arts. They just like to focus on academics and sports, in a very toxic way in thinking that music and arts and fine arts and the high arts are a privilege rather than a right for a balanced education. I was punished for not meeting the academic requirement... I was not able to participate in any music... One of my mentors. [Susan Sajdak, who spearheaded the school's musicals and taiught choir]... she vouched for me and let me be in a musical my senior year. It was the last oppurtunity I ever had to do that. I was good. She was like, "This is kind of really good and you should maybe look into this in the future." 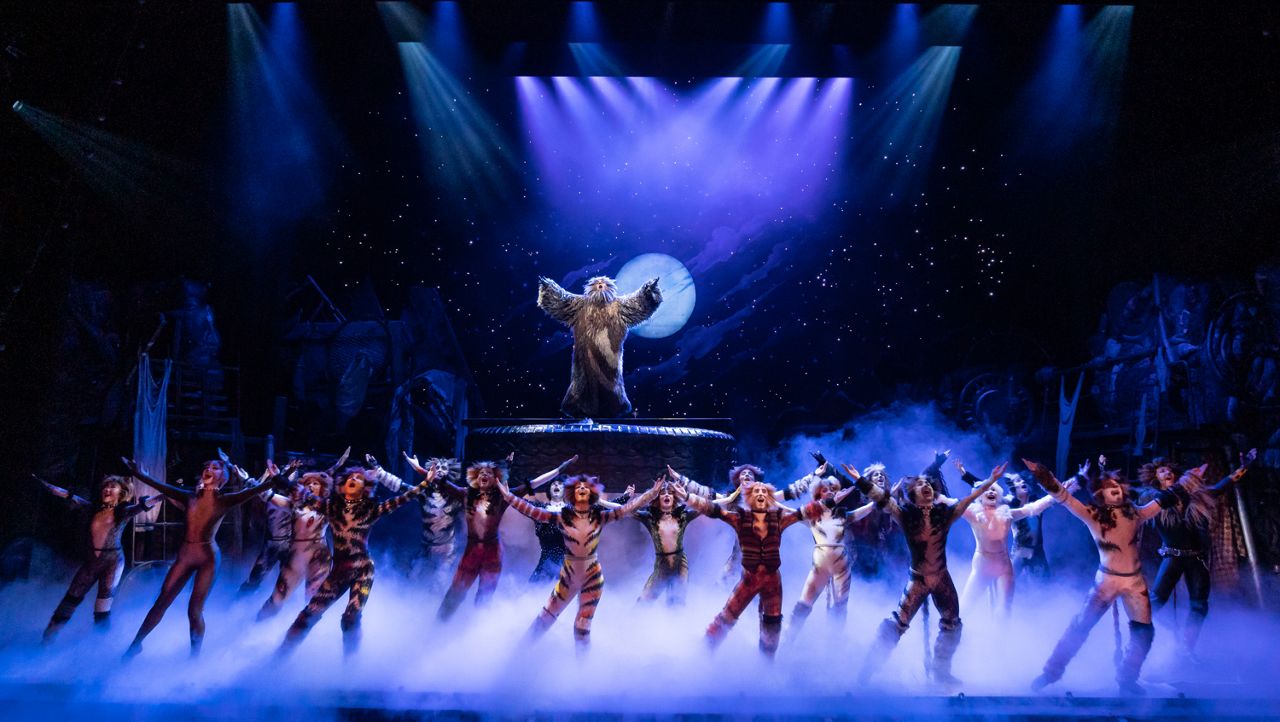 Indalecio De Jesús Valentín as Old Deuteronomy and the company of the 2021-2022 national tour of CATS (Photo By Matthew Murphy, Murphymade)

Spectrum News 1: What is it like for you to come into this role as a person of color, being the first Latino to take on the iconic role of Old Deuteronomy?

De Jesús Valentín: The original production in the U.K. was a white man, but the original U.S. production on Broadway was Ken Page, who is Black. Whenever it's not a Black man, it's been a white man. And then, I think there have been some Asian guys... who have done it like on cruise ships here and there... but nothing that's been within the states like that. It's definitely big shoes to fill. I definitely think that Black people in this country deserve all of the space, and none of us as people of color get any space if Black people don't get space too. When I came into the role I was like, "Oh, I'm the first Puerto Rican, Mexican, Latin American man." This mixed race Latin kid from Milwaukee, Wisconsin, is now in this role, and lighter skinned than most as well. It's weird, because I'm, I'm kind of on the fence of like, "Oh, like, I hope I'm not taking anything away from anyone else."

But also, I know, I'm trailblazing for my people that I didn't see on stage, or the few times that I didn't get to go to stage performance, I didn't I didn't get to get to see names like mine on a marquee growing up. Even if I did in school get see the symphony orchestra or we got to see a kids play or something like that, it was never it was never Latin guys up there that look like my relatives. It was always, just like what we would assume, white men and women on stage... It's definitely a tricky road. But I do hold a lot of pride with being the first Latino in this role. And I look forward to giving the opportunity to some more people of color as well.

Spectrum News 1: Jumping off that, what would you say to a young Latino child who's waitching you up on stage in "Cats?"

De Jesús Valentín: That's kind of what gets me. I have that thought at least every day, and I have it at at least half a dozen times during the show, especially during bows and during intermission. During intermission, Old Deuteronomy sneaks out on stage and looks out into the audience and meditates and thinks. I take that oppurtunity to check in and see who's in the audience. So I get the oppurtunity to see the kids. It's always the kids that have inspired me; I used to be a teacher. They hold kind of a special place in my heart.

Spectrum News 1: What do you hope audiences take away from the show?

De Jesús Valentín: I hope they see through the campy and kitchy reputation that "Cats" might have. One could argue a lot of really problematic things have been taken out of the piece and a lot of outdated things have been updated. It's almost a period piece. It's been around for 40 years... It's almost like a museum piece. I could see how people would be like, "Ugh. It's just 'Cats.' Whatever; eye-roll." But I hope people can see through that... It is a dance show, so it has to be dramatic in its own way. It's almost like seeing an opera. You can't be like, "Ugh these costumes are so crazy..." If you go in with that thought you're not gonna get anything out of it. I hope that people can see through that... "Cats" is about change. It's about understanding.

Read our review of "Cats"

Get more info on the show, here.