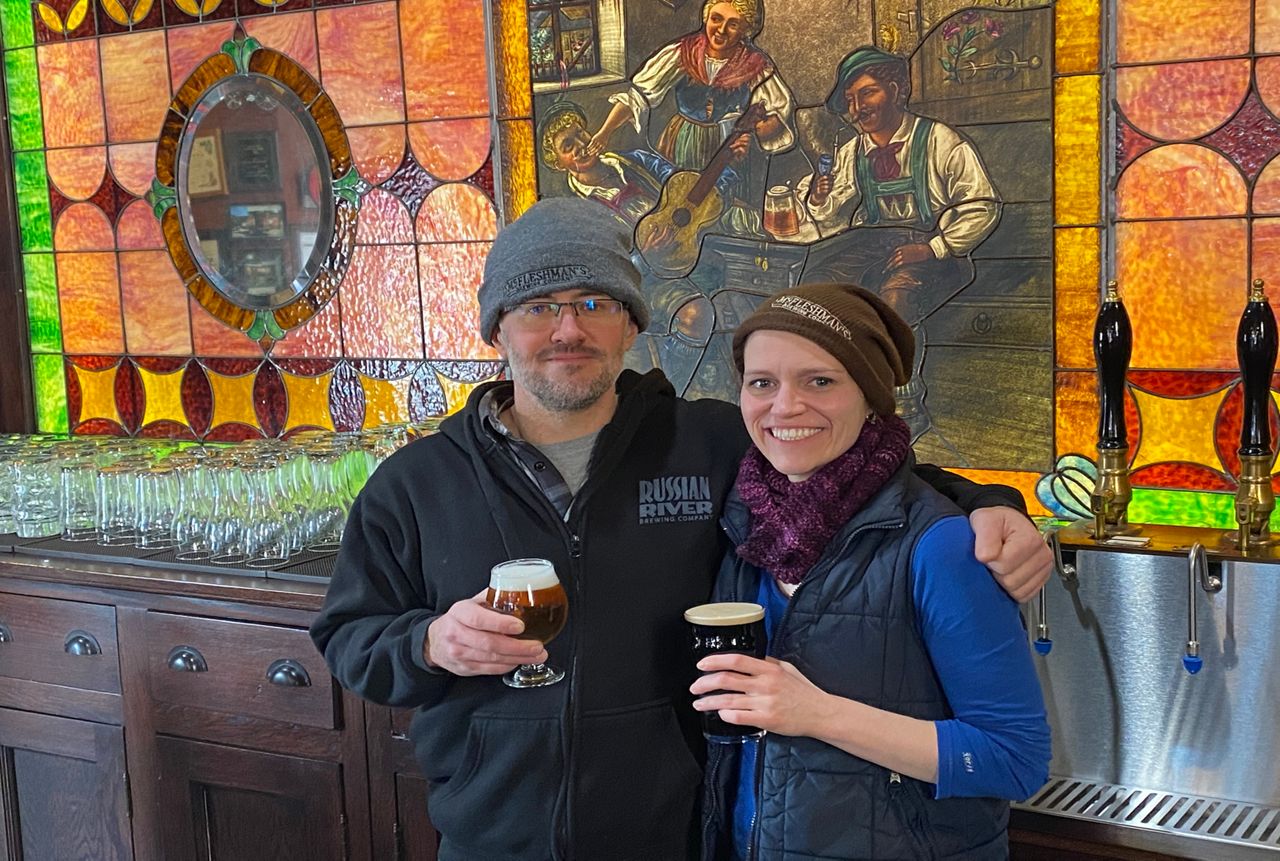 APPLETON, Wis. – For most college students, beer is something you drink after any difficult exam or every Friday, whichever comes first; is something required in bulk when preparing to play certain games; or is an opportunity to secure capital if you can vanquish 12 ounces in seven seconds or less.

Then, we have Erin Hill, a senior chemistry major at Lawrence University, who discovered beer provided an affirmation far beyond the common knowledge that too much in one sitting is not good for your head.

She was given the opportunity to take various craft beers, run multiple experiments on each, looking for the energy stored in all the compounds present and determine how many calories each beer contained in order to help determine if you should just enjoy a guilt-free evening, or protect your waistline and choose a lighter option.

This proved to be a natural high.

“I learned that I have a lot of skills that can be applied to an industry,’’ said Erin, “And sometimes, it’s hard to see that because we’re working with chemicals (in school labs) that their names are so long that who remembers them? And so, by actually seeing my skills in action, it was a cool way to see that I learned a lot of stuff the past four years and I am able to apply them.” 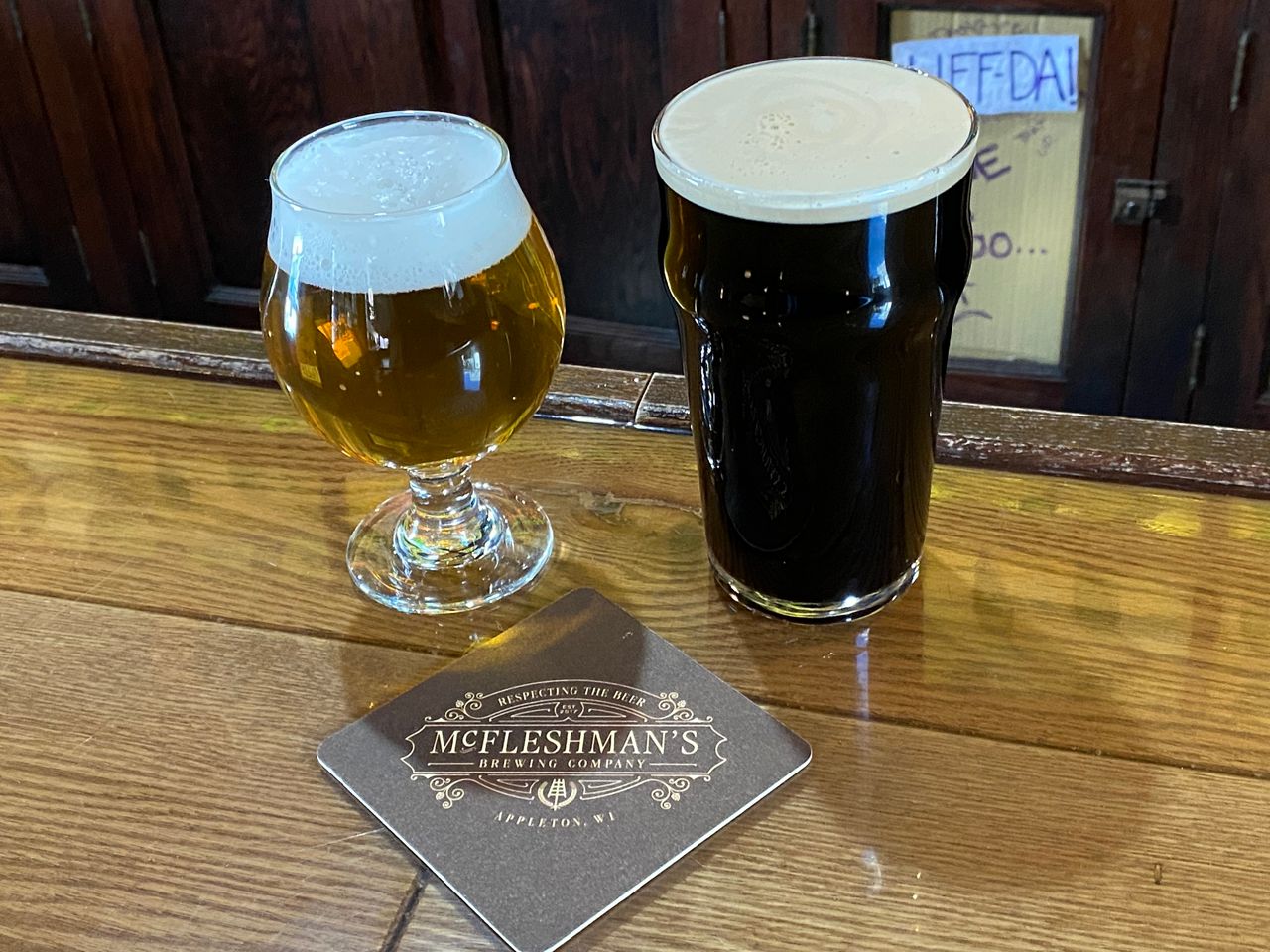 This golden opportunity was made possible by her professor, Allison Fleshman, who not only teaches chemistry at the university, but also is an owner of McFleshman’s Brewing Company, a downtown Appleton taproom and family business that often doubles as a teaching lab for Lawrence students.

“I think it’s awesome to make opportunities happen,’’ said Allison. “It’s kind of what we do at Lawrence for our students. And this is just another means that we can take something that seems so distant, which is chemistry or biochemistry, people think it’s only in the periodic tables that this exists and you can only do it in a lab. But for students to see and touch the science they’re learning in a textbook is happening in a glass of beer, has been really cool.”

So did you hear about the guy who walked away from a possible career at NASA to start his own brewery?

“My parents have supported all the crazy stuff that I’ve done,’’ said Bobby, putting to rest the picture in your head of his parents pulling their hair out at such news.

This love affair with brewing began as a hobby, something to do to deflect the stress of writing his thesis while pursuing his Ph.D. in astrophysics.

His roommate at the time was his advisor for a NASA fellowship he'd won to work on his Ph.D. in Boulder, Co. She was also from England and loved a good English Pale Ale but couldn’t find one to satisfy her palate, even in the microbrew hotbed of Boulder. But Bobby figured it out.

“I was brewing a bunch of that in our basement and, as it turned out, doing that so much over time and getting that thrill of giving people what they want and living in Boulder, especially surrounded by the great beer there, I was pretty much hooked,” Bobby said.

After he earned his Ph.D. he went back to school, but this time at the University of California-Davis to earn a degree in its Masters Brewers Certificate Program that emphasizes brewing science and brewery engineering.

His wife, Allison, after earning her Ph.D. in chemistry from the University of Oklahoma, then landed a job at Lawrence.

But they had a higher purpose than simply opening a bar and brewing beer.

“He got more and more into the science of brewing and he realized that there’s so much we don’t know and don’t understand about the fermentation mechanisms, just the brewing industry as a whole,’’ Allison said of Bobby. 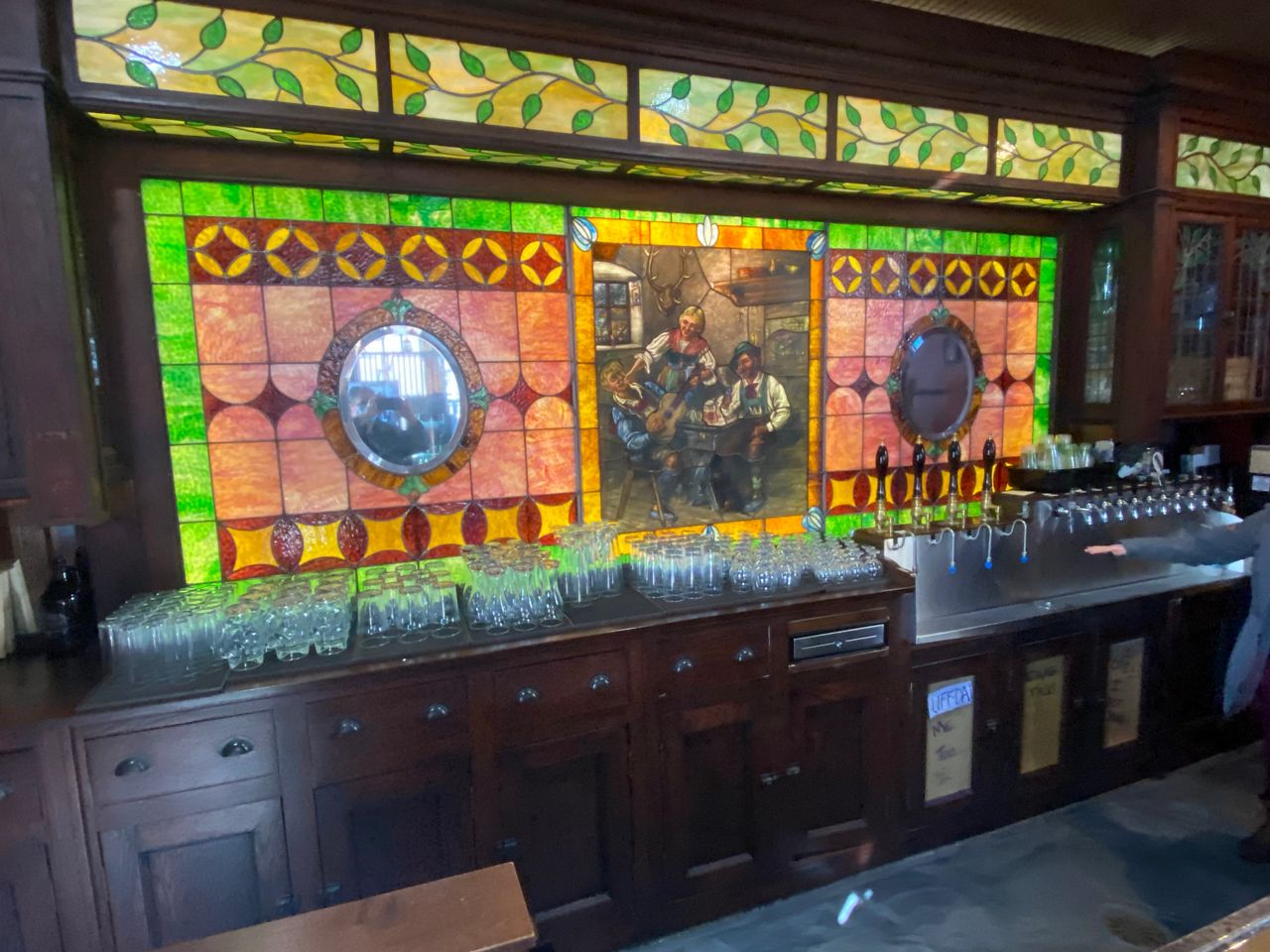 “It takes a lot more energy and water usage to make a craft beer at a small scale. So one of the things he thought he could do was contribute to pushing the craft industry forward in small batches and being sustainable. And the climate crisis is everywhere … we should be thinking about how all these choices that we’re making will have an effect on our climate. And drinking beer is part of that.

“So if there’s a way that we can help the community by changing the process – but in order to change the process, you kind of have to have a brewery to do it. And so, he decided after we defended our theses that he would move on into building a brewery.”

But that proved to be no easy trick. They found a building, but it needed to be completely refurbished.

“A physicist is really a problem solver, and so, when I realized how much there was to know to be a professional brewer, I just dove right in,’’ Bobby said.

And how much do you need to know? Here’s a list of a few of the things Bobby had to put into action: Architectural design, engineering, heating and cooling, biochemistry, microbiology, TIG welding, and, oh yes, business management.

Yet despite everything he brought to the table, Bobby still needed help with certain aspects of the process. And, in a development you might not expect, other brewers stepped in to assist.

“Jeff Fogel, who owns Appleton Beer Factory, he’s a pipefitter,’’ said Allison. “He is brilliant and he has helped us build a lot of our brewery.

“Making beer is really about heating things up and cooling things down in a very controlled way. And when you have Jeff Fogel, he’s really good at helping us understand the way that all the machinery fits together. And, if we’re going to be sustainable, it matters if the thing that heats up the water isn’t fully insulated, or if it has to travel from this point to this point, you’re going to be losing a lot of that heat energy. So, in order to be sustainable, our brewers have to know just not only how to make the beer but how to make it efficiently. And that’s where the multiple disciplines come together; it’s been really crucial.” 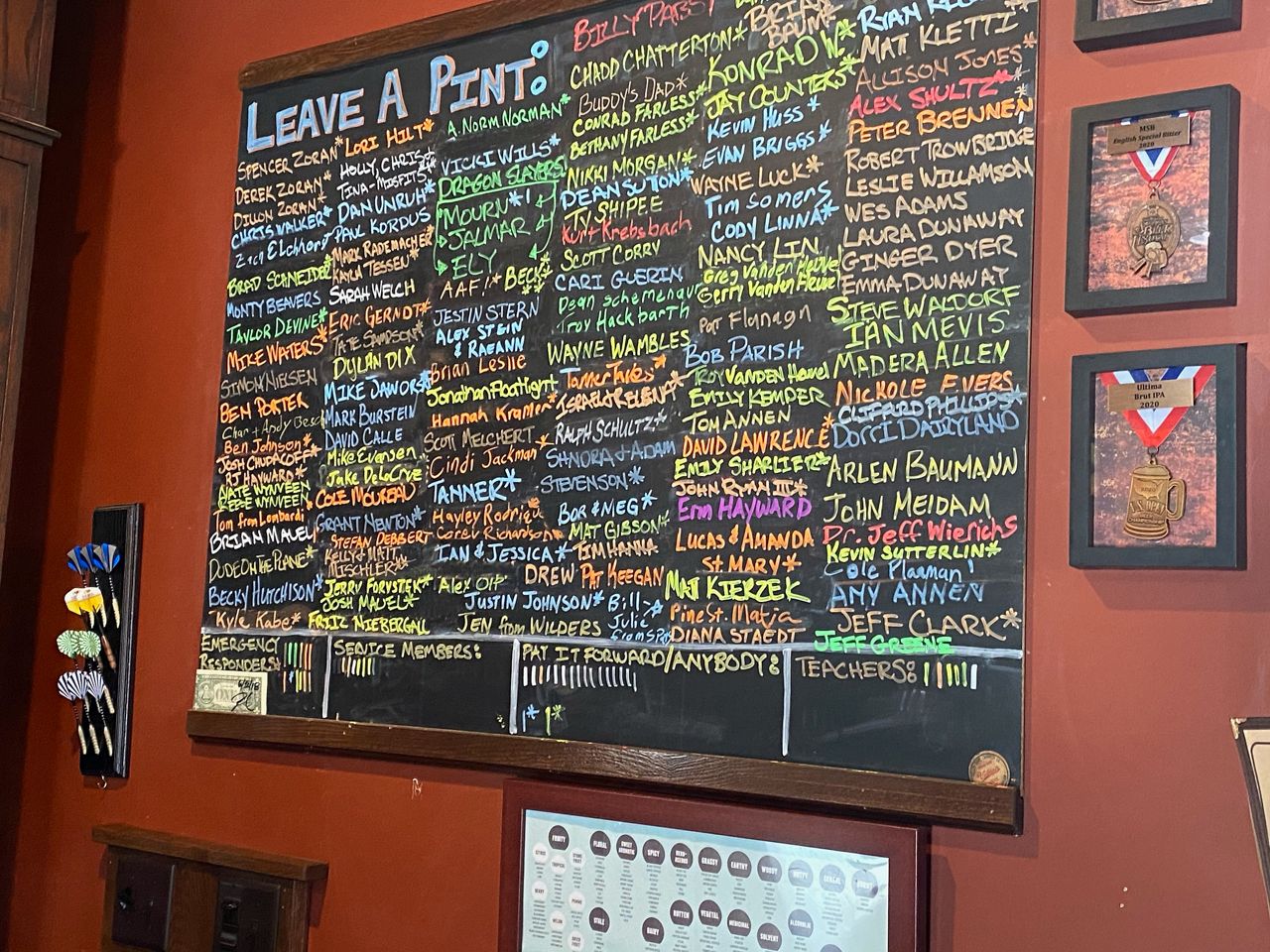 When COVID-19 barged in as an unwelcomed guest, those relationships became even more crucial. Leaders at both Fox River Brewing and Stone Arch Brewpub, along with some other neighboring downtown businesses, offered sound business advice to help Bobby and Allison stay afloat.

“There’s so few of us in these small, local breweries that we all kind of fend together, so we collaborate with all the local breweries,’’ said Allison.

“The pandemic is devastating to so many small businesses, but we continue, month-by-month, I will say that. The one thing that has been great, and this goes back to working with students at Lawrence too, is when you have to solve a problem and you get everyone involved in the problem, some really great ideas can come out of it.”

One of those ideas was applying for and receiving federal money from the CARES Act. That money was reinvested into the business to buy a canning machine that gave them the ability to offer their product in several local grocery and liquor stores.

“It allowed us to make more beer, put more into cans and make end’s meat until the pandemic is over,’’ Allison said.

It is not uncommon for Allison, returning to her room in the early morning hours after tending to their young child, to find Bobby up in bed typing away on his phone.

And as everyone knows, if you don’t get your idea down in the moment, it might not be there when you wake up.

This is clearly one aspect of the job that Bobby likes the best.

“There’s an artistic flair to it,’’ said Allison.

“And that’s the self-serving part of this,’’ Bobby said. “I get to be an artist, even though I’m not one. I get to play an artist some parts of the day. Even though I talk about all the science and technology … and so I’m always; in fact, I woke up with three new recipes today.” 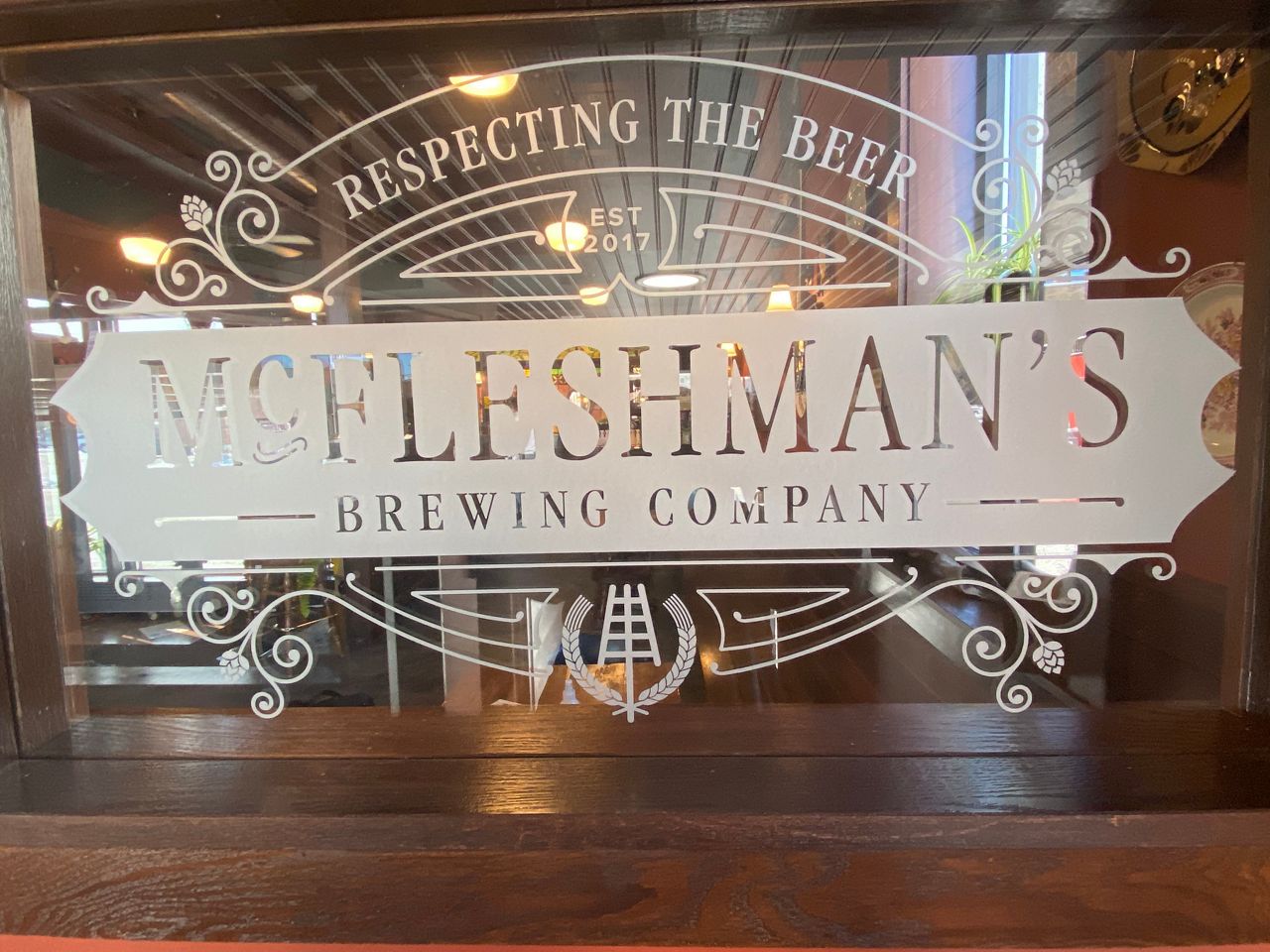 Those recipes have led both Bobby and Allison to discover their five new favorite words: It reminds me of home.

“One of our patrons, we love him dearly, he’s from Ireland and he comes in and this was right when we opened, and he takes our Irish stout and he says, ‘It reminds me of home,’’’ said Allison. “And a German patron told us, ‘Best Kolsch I’ve had. It reminds me of home.’’’

That high praise has also been echoed beyond the walls of their brewery. Even though they’ve been open less than three years, McFleshman’s has already been honored with multiple medals at the Great American Beer Festival, basically brewing’s Super Bowl, where industry professionals from around the world judge thousands of craft beers to identify the best three in each category.

“It’s a feather in everyone’s cap,’’ said Bobby. “This is not easy to do, especially on this scale. We’re competing against brewers making a million barrels, and we’re making 1,000 … and their resources are so beyond ours. So that, just on top of the fact we won it at all, is certainly something to hang your hat on.”

Despite the difficult economic times, Bobby and Allison also pride themselves on the fact they pay their employees a living wage of $15 per hour, have customers who participate in a pay it forward program where they pay for a beer for a future customer who is a teacher, first responder, military veteran – or just anybody – and also rotate donating all tips to various local charitable organizations on a quarterly basis.

Vinzenz Mayer, a senior biochemistry major from Wiesbaden, Germany, spent 10 weeks this past summer working at the brewery.

While he learned just about everything there was to learn about making beer, he also received an education about his education.

“I think it gave me, I don’t want to say a higher purpose, but because I wanted to go to grad school for brewing and the internship showed me that I would really like to do this (food science) research, it kind of motivated me more,’’ he said.

“I have to take some tough classes in chemistry and I really didn’t want to take them, but now, I have a reason to take them because I know they’re going to help me in the end, and that’s something I’m really glad for. I have a goal that I’m working toward and the internship really helped me out with that.

“I’m such a lucky person looking back. It was such a lucky moment. There are not a lot of people that do brewing, nor connect science with brewing, so that was awesome.”

And, as an added bonus, the internship helped him improve his home-brewing skills.

“Oh yeah, for sure,’’ he said of his dorm brewery. “There are a couple of tricks that you learn that are definitely helpful, especially when it comes to fermentation, how to perfectly regulate it, and how to see some science in good fermentation; it’s definitely improving my brewing.’’

And his friends will, and have, toasted to that.

“I mean they’re college students, right?’’ he said. “So normal beer is pretty bad. But I think they’re pretty impressed with it. They’re always fascinated how you can make really good beer on a really small scale in a dorm room.”

It’s all about the science.