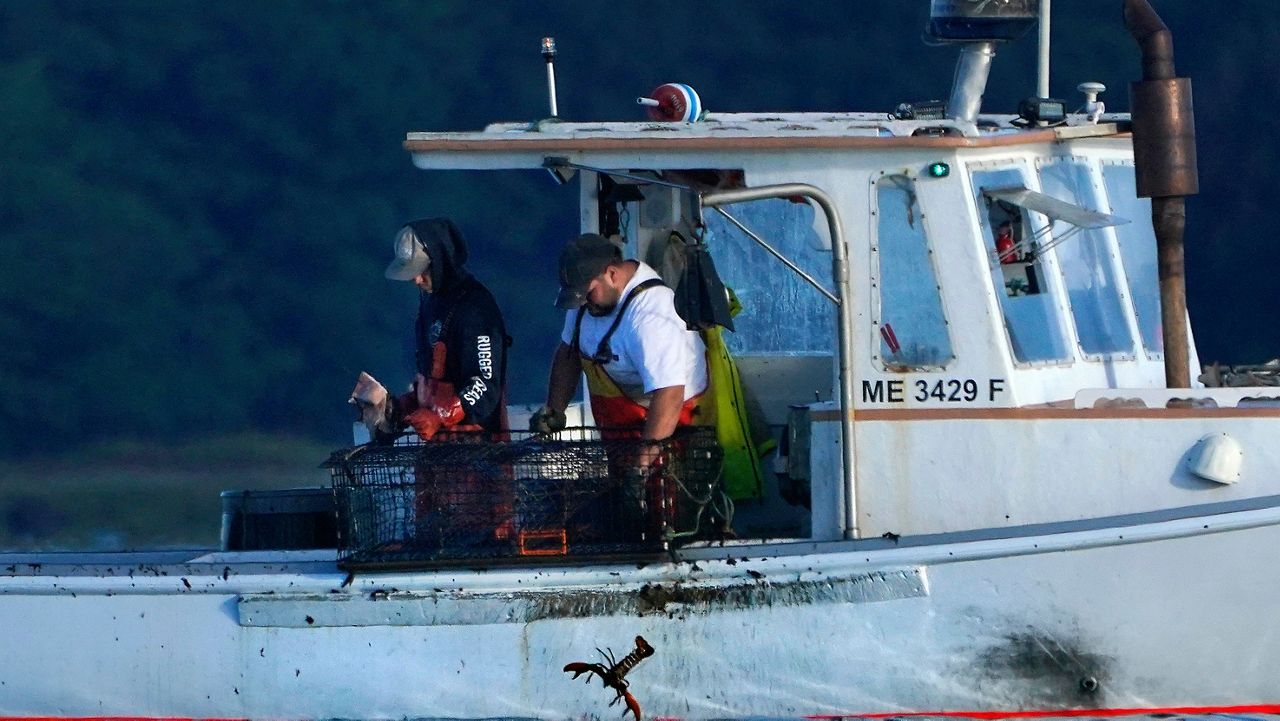 A lobster fisherman drops an undersized lobster into the water while fishing Thursday, Sept. 8, 2022, off of Kennebunkport, Maine. (AP Photo/Robert F. Bukaty)

Some restaurants and retailers, like meal kit companies Blue Apron and HelloFresh, are pulling lobster off their menus after an influential conservation group put North Atlantic lobster on its list of seafood to avoid.

Seafood Watch, a conservation organization based at the Monterey Bay Aquarium in California, this week put North Atlantic lobster on its "red list" of seafood to avoid, as a hope to protect endangered species like the North Atlantic right whale.

Seafood Watch says lines from lobster traps could entangle North Atlantic Right Whales, an endangered species, which could potentially lead to their deaths. The group, in its report, claims that the fishing industry is a danger to North Atlantic right whales because "current management measures do not go far enough to mitigate entanglement risks and promote recovery of the species."

Since the announcement, lawmakers from both Maine and Massachusetts have issued a strong rebuke against the conservation organization, coming to the defense of an industry they say is unfairly being targeted.

“The recent decision by Monterey Bay Aquarium's Seafood Watch to 'Red List' Maine lobster with scant evidence of impacts on right whales is a reckless piece of activism that will inflict substantial negative real-world consequences on an important and iconic industry in Maine,” the delegation wrote in a statement.

“In a courtroom, we require evidence before convicting someone of a crime; but you are seeking to sentence Maine’s lobstermen with conjecture, assumptions, and guesswork instead of hard facts. If anything, the publicly available facts rebut this aggressive action that will impact the livelihoods of thousands of people in Maine, and make it clear that you should immediately reverse the irresponsible designation,” the statement continued.

“When it comes to right whale conservation, our fishermen are continually thinking of ways to how they can further help reduce the risk,” Beth Casoni, Executive Director of Massachusetts Lobsterman’s Association told Spectrum News. “Our most recent endeavor is the creation of this candy cane rope, the rope breaks at 1700 pounds."

"Massachusetts Lobstermen know this issue, care about this issue, and have remained committed to doing their part despite regulations that entail major sacrifices by the industry,” Sen. Ed Markey, D-Mass., said in a statement to Spectrum News.

“Massachusetts lobstermen and fishing families have always been strong stewards of the ocean, shouldering much of the burden to help protect the North Atlantic right whale while working collaboratively with scientists to find creative solutions. The severity of this crisis demands urgent action from all stakeholders, and I’m confident that Massachusetts will continue doing its part to make the oceans safe for endangered right whales," Sen. Elizabeth Warren, D-Mass., told Spectrum News.

"It is very frustrating and very unfair to the fishermen of Maine. To even be on this list. When you look at NOAA's data. We have not killed any North Atlantic right whales. The last entanglement was in 2004. And that whale was disentangled, is alive and thriving," Virginia Olsen, Director of the Maine Lobstering Union Local 207 said.

Lawmakers fear the "red list" label will cause significant economic harm. Following the announcement, home meal kit companies Blue Apron and Hello Fresh announced they will follow the Seafood Watch’s guidelines and started pulling North Atlantic lobster from their offerings. Seafood Watch also has partnership agreements with retailers like Whole Foods and the Cheesecake Factory, though they have yet to comment on their plans.

Fishing boats from Maine and Massachusetts harvest more than 90% of the lobsters sold in the U.S, a half billion dollar a year industry. Lobsterman Curt Brown, a marine biologist, said the Seafood Watch rating puts the lobster industry in jeopardy.

When asked by reporters what steps they are prepared to take if Seafood Watch doesn’t rescind its rating, King said they were not yet prepared to discuss it.

“Let’s give them a chance to do the right thing,” King said. “They may reconsider and they should.”

Maine's congressional delegation is now demanding that Seafood Watch reverse its decision saying the red list label is based on a “guilty until proven innocent” standard.

Seafood Watch told Spectrum News that it stands by what it called "its science-based assessments". A spokeperson added that an announcement on a related court ruling "confirms that we used the best available science... and on September 8, NOAA Fisheries announced that additional risk reduction is needed in all East Coast gillnet and trap/pot fisheries regulated under the Atlantic Large Whale Take Reduction Plan to meet legal requirements."