Sarah Boudreau, 72, stands in front of some highbush blueberry bushes on Winslow Farm in Freeport. This year's blueberry season is over for her, but each year the family holds its breath to see if an invasive fruit fly species will wreak havoc on their berry crops every August. A new nationwide study aims to produce a method of controlling the flies. (Spectrum News/Sean Murphy)

Max Boudreau has a big worry caused by a tiny pest.

Boudreau, 37, manages the organic Winslow Farm in Freeport. With more than 1,000 bushes of blueberries, raspberries and blackberries to tend to and harvest, he’s concerned about the impact of an invasive fruit fly that has made it to Maine.

Its technical name is the spotted-wing drosophila, and it’s the subject of a new, nationwide $3 million study, funded by the USDA and led by Philip Fanning, an assistant professor of agricultural entomology at the University of Maine.

The little fly, Fanning said, has been in Maine since 2011. The study aims to properly document the potential damage it can do, and whether a parasite Fanning is developing will be effective in stopping it.

Fanning said work with the parasite has already begun, but the $3 million grant announced on Sept. 26 will allow the study to expand to include organic farmers like the Boudreau family.

Maine has its share of native fruit flies, Fanning said, but this variety comes from southeast Asia, and first made an appearance in the U.S. in California in 2008.

“A mere four years later, it was present in pretty much every state in the United States,” Fanning said.

Fruit flies damage crops by laying eggs inside fruits such as berries. The drosophila, Fanning said, is stronger, and can penetrate even harder, unripe berries, putting berry growers at an even greater risk.

“It’s like they have a little chainsaw attached to their butt,” he said of the flies.

Blueberries are big business in Maine. According to the USDA, Maine manages about 40,000 acres of wild blueberries on a two-year cycle, and harvested about 20,000 acres in 2017.

According to the Wild Blueberry Commission of Maine, wild blueberries alone have an estimated annual economic impact of more than $250 million. The commission’s data shows the wild blueberry industry also supports more than 2,500 jobs statewide.

Winslow Farm grows cultivated, highbush blueberries. Sarah Boudreau, the farm’s co-owner, said she and her husband first planted blueberries on the property in the mid-1990s.

She declined to say just how much money the blueberries earn the farm every year, but added that pick-your-own blueberries were more valuable as a marketing tool for the farm.

Sarah Boudreau said she first noticed the flies about 10 years ago, around the same time she noticed the weather in the area was becoming warmer. Warmer weather means blueberries can be picked earlier, but she and Max worry about the crop come August, when the fly population peaks.

Max Boudreau said August is also the peak harvest period for the farm’s blackberries and raspberries, which he and his staff usually have to race to harvest before they become overripe and fodder for flies.

“There’s a point where you’re picking, and the berries begin to feel soft, and they fall to the ground, and then that attracts more flies,” he said.

Fanning is betting that a parasite called Ganaspis brasiliensis will be the answer. Researchers introduced the parasite onto four blueberry farms in Maine in August. The idea, he said, is that it will infect and kill the fruit fly larvae, preventing the population that survived Maine’s winter from reproducing in the summer.

Similar experiments, Fanning said, are going on now in eight other states nationwide. He hopes to know how effective the parasite treatment has been later this fall. Part of the new grant money will also fund research to see if the parasite will survive the Maine winter, making it even more effective in the spring.

If it is, Fanning imagines the parasite will be introduced statewide. Individual farmers won’t be responsible for that, but he said part of the funding will go toward educating farmers on how to help make the parasite treatments more effective.

“We’re not telling growers to abandon traditional controls,” he said.

Max Boudreau hopes Fanning’s treatments will be effective. For organic growers like him, spraying commercial pesticides aren’t an option, and even for non-organic farmers, it’s hard to know just how early in the season to begin spraying against the flies.

“They recognize even immature fruit, so they get in there and lay their eggs, and the fruit isn’t even mature yet,” he said. 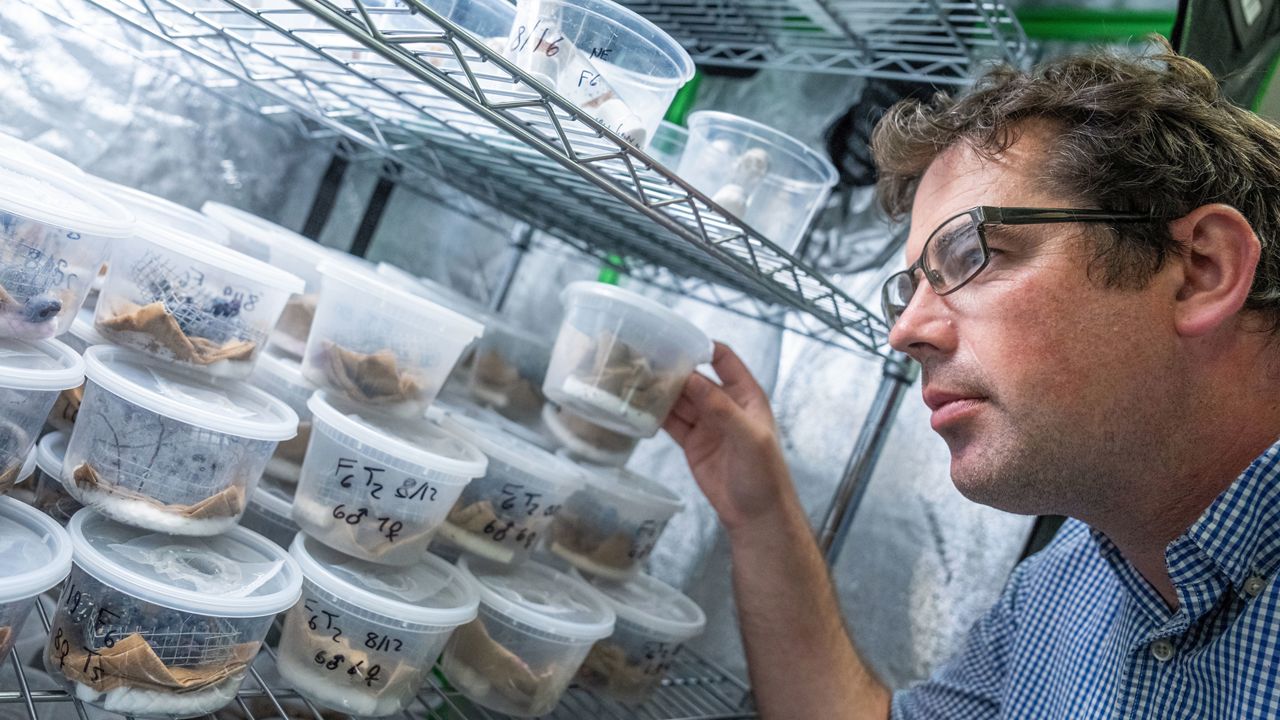 Philip Fanning, an assistant professor of agricultural entomology at the University of Maine, examines samples of a parasite used to control an invasive species of fruit fly that has spread nationwide. Fanning is leading a national team of researchers who are studying the fly and the effectiveness of the parasite in killing it. (Photo courtesy of the University of Maine).