Gov. Janet Mills talks about health care, climate change and her personal story during her address to the convention on Saturday. (Photo by Susan Cover/Spectrum News Maine)

Gov. Janet Mills highlighted Medicaid expansion, access to abortion services, a large balance in the state’s rainy-day fund and her resolve to win again in November during her Saturday speech to the Maine Democratic State Convention.

In a 25-minute speech that ended abruptly when the fire alarm at the Cross Insurance Center went off — ending not only her speech but the two-day convention — Mills mixed her personal backstory with the refrain “we won’t go back.”

The refrain targets her fall opponent, former Republican Gov. Paul LePage, who is running for a third term as governor.

“So much of what we value so deeply is on the ballot,” she told the estimated 500 people in attendance and the 500 watching online. “The right to affordable health care, including safe and legal abortion, the right to a great education for every child in Maine regardless of their ZIP code.”

She went on to mention steps to mitigate climate change, gay marriage and the need for Mainers to have good paying jobs. In a video before her speech and in the speech itself, Mills referenced surgery she had at age 14 in which a steel rod was placed in her back, leaving her in a cast for nearly a year.

She highlighted her election to become the first woman district attorney in New England, the first female attorney general in Maine and the state’s first female governor. She frequently mentioned LePage, criticizing him for vetoing bills to expand Medicaid, failing to release bonds to pay for senior housing and for cutting funds for cities and towns.

Earlier in the day, U.S. Rep. Chellie Pingree (D-1st District) urged fellow Democrats to fight for the next six months. Pingree, who has served six terms in Congress, faces Republican Ed Thelander in November, though she never mentioned him in her convention speech.

“I think what’s hard to face in this election, we’re doing battle on so many fronts that we thought were settled,” she said. “I was a teenager when Roe v. Wade passed. The basic right to vote and make sure your vote is counted. The basic belief in democracy that everyone is equal.”

The speeches capped a day of protests and counterprotests, starting with a group urging Democrats to follow through on promises to grant tribal sovereignty, then a press conference by Republicans who said Democrats are focusing on the wrong things and ending with a protest by Democrats for abortion rights.

As they stood at the feet of the lumberjack statue outside the Cross Insurance Center, Republicans attempted to deliver statements to the press but were quickly drowned out by convention attendees who shouted “We won’t go back!” and held signs promoting Democratic candidates. 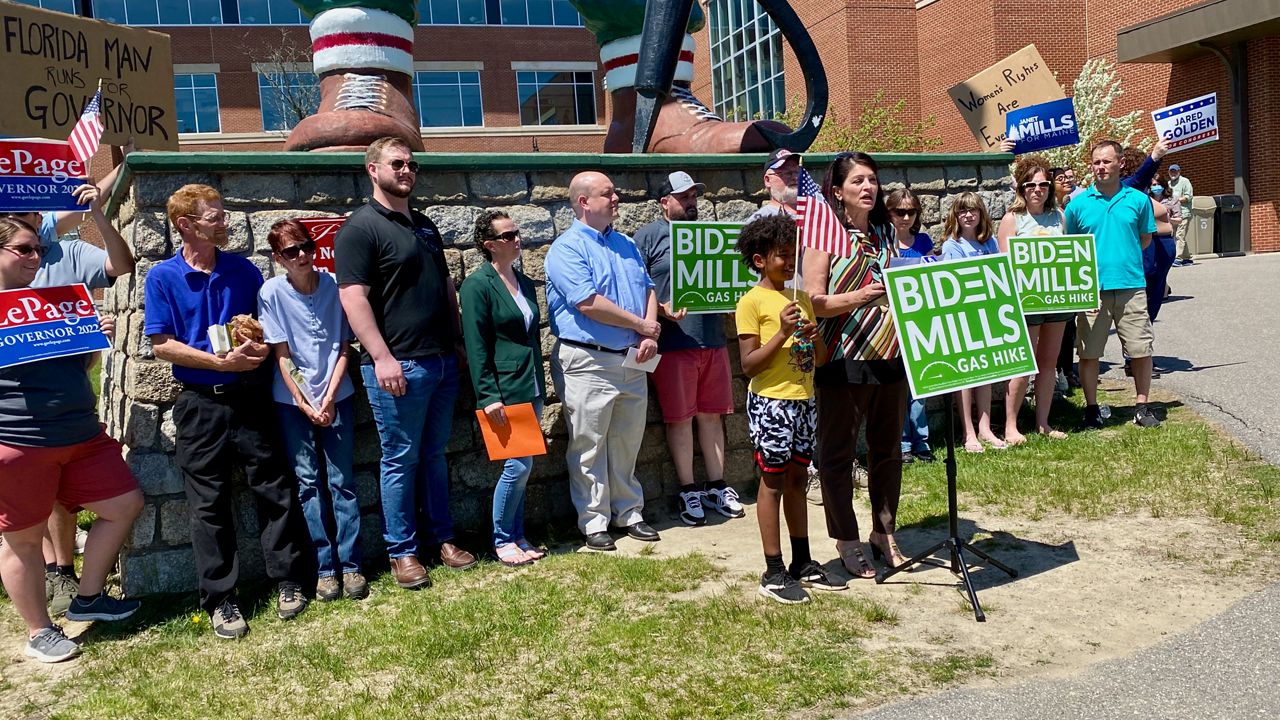 “In other words, inflation,” she said. “We just hit record gas and diesel prices here in Maine. Food prices are out of control. Shelves are bare. And mothers are desperately searching for baby formula. I guess if you choose to have a baby, you just can’t feed the baby.”

Just over a minute into Kouzounas’ statement, the chanting started and grew louder. Two others spoke and then Sen. Trey Stewart (R-Presque Isle) walked up to the microphone.

“I think it’s pretty telling when you’ve got folks on either side (of the Republicans) that are drowning out the message that Mainers actually care about,” he said. “And that’s their pocketbook.”

He said while most Mainers are concerned about rising costs “here they are talking about abortion and killing more babies.”

In her speech, Mills did mention the economic pain Mainers are feeling because of inflation. She said she’s delivering relief in the form of $850 checks to be sent to most Mainers and she noted for most two-adult households, that will translate into $1,7000.

“We’re here to hold accountability to make sure that tribal sovereignty remains a priority for the Democratic Party and they actually follow through on their promises,” said Luke Sekera-Flanders of Freyburg. “It is part of their party platform.”

The platform, which passed without discussion on Friday, says “we believe we must honor and uphold our sacred obligation to the Native Americans who first inhabited this land and that the sovereignty and self-determination of all indigenous tribes in Maine should be recognized and respected.” 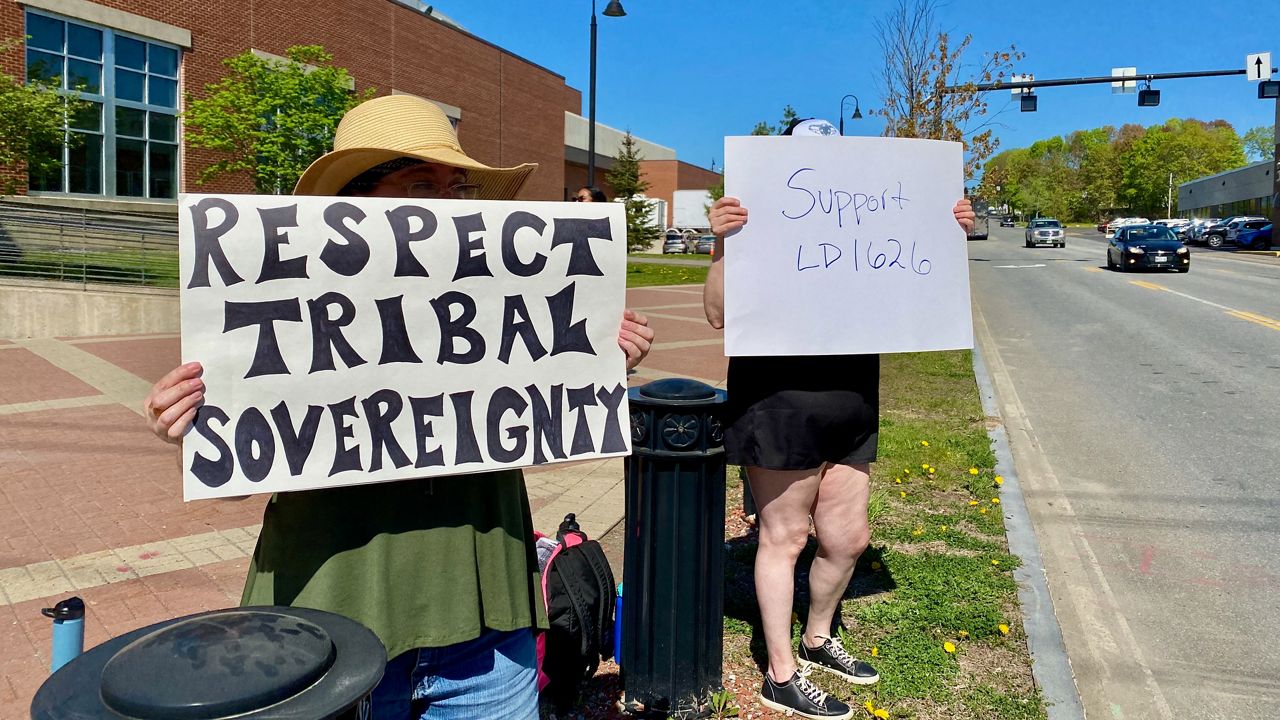 About 20 protesters greeted convention goers Saturday as they urged Democrats to follow through with full tribal sovereignty. (Photo by Susan Cover/Spectrum News Maine)

The two-day convention began each day with a “territory acknowledgment” in which elected officials spoke of the tribal rights to the land on which the convention was being held.

Legislation to grant full sovereignty — which would put the tribes on equal footing with all other federally recognized tribes in the country — passed the House and Senate, but never made it to the governor’s desk. Mills indicated the bill went too far and offered her own compromise that gave the tribes some rights, but fell short of full sovereignty.

Tribal leaders said they had made good progress with the passage of the Mills compromise, which gave them online sports betting as a source of revenue and the passage of a bill to allow the Passamaquoddy to improve water quality on their reservation at Pleasant Point. But they vowed to continue to pursue full sovereignty.

In her speech, Mills briefly mentioned tribal rights, saying she wants to build on the progress made so far.

“We will continue to engage in constructive respectful dialogue with the people of the Wabanaki Nations to build on the progress we’ve made knowing that everything we’ve achieved so far, and it’s a lot, is just the beginning,” she said, drawing enthusiastic applause.

Mills also vowed to provide internet access to all Mainers who want it by 2024, to continue to combat the opioid epidemic and to work with Republicans to reach “consensus, not conflict.” She said she’s ready for a contentious campaign.

“If you don’t think I’m up for a fight, you’re dead wrong,” Mills said as the alarm began to sound. “I’ve spent the better part of my career listening to loud men talk tough. I’ve never backed down from a fight and you can be damn sure I won’t start now.”