UK honors to classes of hall of fame inductees

LEXINGTON, Ky. —— The University of Kentucky will be celebrating the induction of two Hall of Fame classes at a dinner and ceremony Thursday, Nov. 4 and the public is invited to attend.

Tickets to the University of Kentucky Athletics Hall of Fame Induction Dinner and Ceremony are $100 each and can be reserved by calling Christin Sherrard at (859) 218-3931 or by emailing her at christin.sherrard@uky.edu. The deadline for reservations is Oct. 22. The event will be held at the Central Bank Center Ballroom.

Two-time national champion … Second-leading scorer and leading rebounder on the 1998 team that went 35-4, won the national title and the SEC regular season and tournament championships … A reserve on the 1996 national title team that went 34-2 … Averaged 12 points, 7.2 rebounds and 1.9 blocks during the 1998 run … Tabbed All-SEC First Team by the league’s coaches and the AP … Named to the 1998 SEC All-Tournament Team … Entered NBA Draft after his junior season and was selected in the first round by Utah … Played more than 1,000 games, scored nearly 6,000 points and grabbed nearly 5,000 rebounds during an 18-year NBA career … Won an NBA championship with San Antonio in 2005 … Currently a scout for the Oklahoma City Thunder.

One of the greatest offensive linemen in Kentucky history went on to an outstanding career in the NFL … Helped UK to two bowl games … Did not allow a quarterback sack and graded over 90% during his senior year … Earned all-star recognition all four years at UK … Earned All-America Third Team honors as a senior from Associated Press and Phil Steele’s College Football … All-SEC First Team as a senior by ESPN.com and CBSsports.com … All-SEC Second Team as a junior and sophomore … Named to the Sophomore All-America Team by College Football News … Freshman All-SEC by league coaches … Seven-year NFL career with Detroit and New Orleans … Pro Bowl selection in 2017, 2018 and 2019.

Head coach of UK women’s golf for 23 seasons … Led UK to the NCAA Regionals 14 times, including five trips to the NCAA Championships … Best national finishes were fifth place in 1986 and 10th place in 1998 and 1991 … SEC Coach of the Year in 1992 … mid-Atlantic Coach of the Year in 1986 and 1990 … Coached two All-Americans and had six first-team All-SEC selections … Coached four All-SEC second-teamers after that honor was added in 1993 … After retiring from coaching, served as UK’s director of golf operations for 17 years … UK’s golf tournament is named in her honor … Inducted into the National Golf Coaches Hall of Fame in 1997 … Elected to the Kentucky Golf Hall of Fame and Transylvania University Sports Hall of Fame.

Captured the NCAA indoor championship in the mile in 1990 … Won six SEC championships, two individual events and four relays … Was the SEC champion in the indoor mile in 1990 … Crowned the 1990 SEC outdoor champion in the 1500-meter run … Ran on four SEC indoor champion relays — twice each in the distance medley relay and the 4x800-meter relay … Set the outdoor record in the 1500-meter run with a time of 3:40.56, which stood until 2014 … First Wildcat to break the four-minute mark in the mile, his record time of 3:58.77 also stood until 2014 … an All-American from 1989-1991 … Twice named UK Male Athlete of the Year … Represented the USA in the 1991 World University Games … Academic All-American … Currently an anesthesiologist. 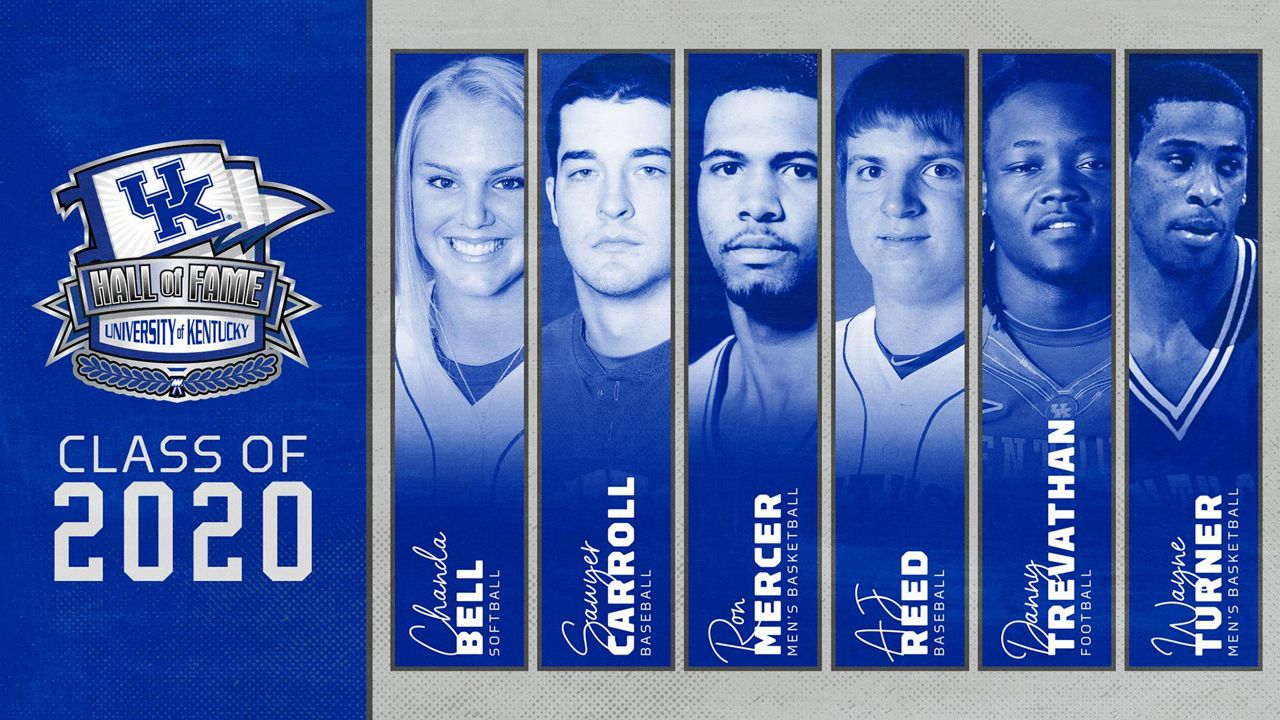 Her arrival in 2009 coincided with the emergence of UK softball as a national power … Led UK to its first four NCAA Tournament appearances in school history, including UK’s first Super Regional … Won 68 games with a career ERA of 2.55 … Still holds five school records, including strikeouts in a game (16), season (288) and career (910) along with lowest opponent batting average in a season (. 175) and career (. 200) … Threw five no-hitters, including the first no-hitter (2009) and first perfect game (2012) in UK history … National Pitcher of the Week in 2012 … Two-time SEC Pitcher of the Week and SEC Freshman of the Week … 2009 SEC All-Freshman Team … UK student assistant coach in 2013 … Assistant coach at Marshall (2014-17) and Indiana (2018-present).

Member of the 1996 national championship team as well as the 1997 national runner-up team … NCAA consensus All-America first team in 1997 … Named to the 1996 NCAA Tournament All-Final Four Team … Named Freshman All-SEC in 1996 … 1997 NCAA Tournament All-Final Four Team … 1997 NCAA Tournament West Regional Most Outstanding Player … SEC Player of the Year by league coaches and AP in 1997 … 1997 SEC Tournament MVP … Scored 725 points in his sophomore season, at the time the fifth most in a season in program history … Member of Kentucky’s 1,000-point club (1,013) … Declared for the 1997 NBA Draft after his sophomore season … Drafted in the first round, sixth overall, by the Boston Celtics … Played eight seasons in the NBA.

Most accomplished player in UK history … 2014 unanimous National Player of the Year, by seven selectors, when he had arguably the greatest single season in college baseball history — .336 batting average, 23 home runs, 73 RBI while going 12-2 as a pitcher (Friday starter) with a 2.09 ERA … Led the nation in homers and slugging percentage (. 735) … Also the SEC Player of the Year and SEC Male Athlete of the Year (all sports) … Two-time first-team All-SEC … Freshman All-American in 2012 … Career stats feature .306 average, 40 HR and 168 RBI, along with 19-13 pitching record and 2.83 ERA … Four-year major league veteran with the Houston Astros and the Chicago White Sox.

Two-year All-America linebacker … First All-America linebacker in school history … Chosen National Linebacker of the Year by the College Football Performance Awards after monster senior season in which he totaled 143 tackles, 11.5 tackles for loss, four interceptions, five caused fumbles and five pass breakups … Led the SEC in tackles as a junior and senior, earning first-team All-SEC honors both years … First-team All-America as a junior with 144 stops … Selected in the NFL Draft by the Denver Broncos … Led Denver in tackles two years, with the team advancing to the Super Bowl in both of those seasons, including one Super Bowl championship … 10-year veteran with Denver and the Chicago Bears.

Member of 1996 and 1998 national championship teams as well as the 1997 national runner-up team … Finished his career as UK’s and the NCAA’s all-time games played leader with 151 games (now ranks second) … UK’s all-time steals leader with 238 … Member of UK’s 1,000-point club (1,170) … During his career, helped Wildcats to two SEC regular-season championships and three SEC Tournament championships … Named to the 1997 NCAA Tournament All-West Regional Team … Named the 1998 NCAA Tournament All-South Region Most Outstanding Player as well as the 1998 SEC Tournament MVP … Named All-SEC third team in 1999 and was also named to the SEC All-Tournament Team … Played one season in the NBA.

Since 2005 the UK Athletics Hall of Fame has recognized and honored those whose participation and achievements celebrated the University’s athletics program. The inductees are chosen by a committee made up of Hall of Famers, media members, campus representatives, current coaches and administrators.