LMPD put up a billboard for its recruiting trip to Atlanta earlier this year. (LMPD)

LMPD ramps up recruitment in face of shortage

LOUISVILLE, Ky. — In March, recruiters from the Louisville Metro Police Department (LMPD) traveled to Atlanta hoping to find officers willing to trade a job with Georgia’s largest police force for one with Kentucky’s. The immediate results were less than ideal, with only three new hires coming from the trip, along with a yet-to-be-determined number of laterals — officers transferring from other departments.

But there was one measure by which the trip succeeded. “We marketed it pretty productively,” said Sgt. Justin Bickett, who leads recruitment efforts for LMPD. “We got a lot of attention. It showed the nation that we’re coming.”

The most attention-grabbing part of that marketing effort was a billboard in downtown Atlanta that featured a photo of LMPD Chief Erika Shields and a message to the officers she led in her prior job as Atlanta’s police chief. “Join us in Louisville,” the sign said. “Laterals welcome.” 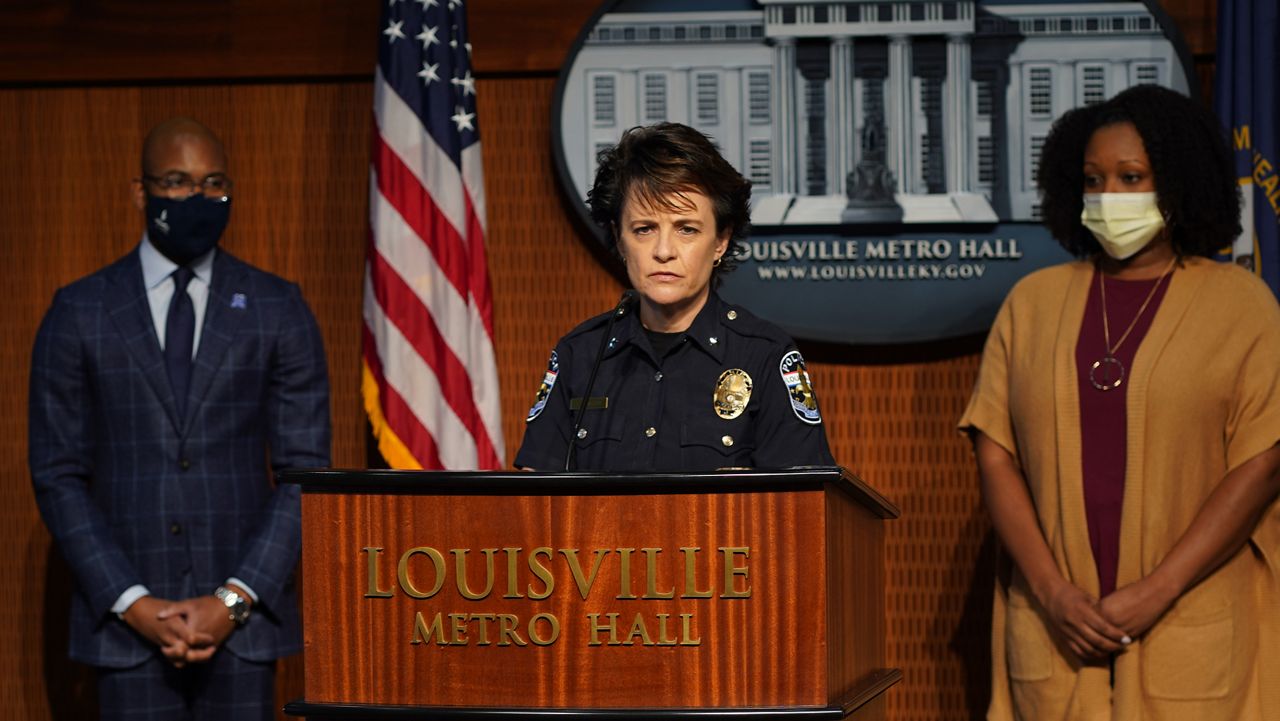 LMPD began its out-of-state recruitment efforts in Atlanta, where Chief Erika Shields served in the same role prior to coming to Louisville. (File photo)

The message may not have landed in Atlanta, but it spread. And last week, when LMPD took its second out-of-state recruiting trip, this time to Chicago, Bickett said word of LMPD’s recruitment efforts had gotten out.

“We had people from northern Indiana and the Chicago area,” he said. “We had one from Wisconsin that was interested. We had 19 applicants from the Chicago trip.”

The focus of recruiting officers from other states is part of a broader push to fill hundreds of vacancies within LMPD, which is short roughly 300 sworn officers. So far, recruitment efforts have focused on departments where LMPD sees an opportunity to poach officers unhappy with their current positions. That was part of the reason LMPD was drawn to Chicago. “Mayor Lightfoot in Chicago was trying to push vaccine mandates, and we weren’t here,” Bickett said.

Officer shortages are not a problem unique to Louisville. Police departments around the nation are undermanned due to retirements, the great resignation, and waning interest in joining the police.

Bickett said there’s a “negative stigma” around policing that emerged in the aftermath of the police killings of Breonna Taylor and George Floyd in 2020. Some prospective police officers fear that the public would be against them if they joined the force, he said. There may be good reason for that. According to the Pew Research Center, the number of Americans who trust police to act in the best interest of the public has declined by nearly 10%.

The recruitment challenge has coincided with a retention challenge. Some officers who were in LMPD in 2020 were driven away, either to small forces or out of the job entirely, by the challenges of the job, Bickett said.

“A lot of those officers just needed a break,” he said. “They needed to get away from it.”

Lately, though, Bickett is seeing signs of a turnaround. This week, LMPD will start its largest academy class in three years. The class of 31 is less than capacity, which is 48, but higher than the 18- and 19-member recruit classes LMPD hosted in recent years.

Last month, LMPD also began its first academy class for laterals since 2016. The four-person class includes three officers transferring from in-state and one from out of state. Some officers who left LMPD in the past couple of years have also begun showing an interest in returning.

“They got to civilian life and they realize that they really miss the police department,” Bickett said.

On the recruitment trail

When Detective Kevin Lewis began working in recruitment for LMPD in 2017, he saw a replenishing crop of people who came to the department to fulfill dreams of being police officers. That’s changed in the five years since.

“Now that it’s become more difficult recruiting, we’re reaching out to people and saying, ‘Hey, I see that you’re really good at your job. Have you ever thought about wanting to be the police?’” he said.

LMPD has seen a lot of other changes in the past five years. For recruiters, the most significant is pay. “We’re marketing that within two years you make over $71,000,” said Bickett. That’s a result of a recently negotiated contract between LMPD and the River City FOP, the union representing officers. The raises were approved despite objections from community members who said officers in a department responsible for Taylor’s killing and the Explorer sex abuse scandal did not deserve to be rewarded with raises.

When you add the salary increases to the overtime available because of the staffing shortage, “officers can come in and just make a killing right now,” Bickett said.

LMPD is also executing a social media strategy to win over recruits. That includes calls for applications to the quarter million people who follow LMPD on Facebook, and more recently, a TikTok account.

Check out our 1st Division officers calibrating the new speed machine! Check us out at https://t.co/KDaxSWuIvu pic.twitter.com/tfUavi5nlU

As part of its recruitment efforts, LMPD is also hoping to diversify its force. According to the department’s latest demographics report, nearly 71% of the department are white males. Bickett said LMPD is attempting to both recruit Black officers and to maintain a positive presence in historically Black parts of the city. As part of that effort, the office is conducting its physical agility testing at the Norton Healthcare Sports & Learning Center in Russell.

LMPD is also working to bring more women on to the force, which is less than 14% female. Bickett cited research showing that having women on a police platoon makes use of force incidents less likely and praised the ability of female officers to deescalate tense situations.

The efforts to find those new officers will continue both locally and around the country as LMPD plans more trips and continues to close its officer shortfall. Bickett said New York City may be next following a recent court’s reinstatement of a law banning police officers from compressing a suspect’s diaphragm. The law, which faced legal challenges, was put in place after the 2014 police killing of Eric Garner. Its reinstatement resulted in “a lot of negative feedback from NYPD,” Bickett said, including one officer who called him directly and said, “Hey, we wanna come to Louisville tomorrow.”