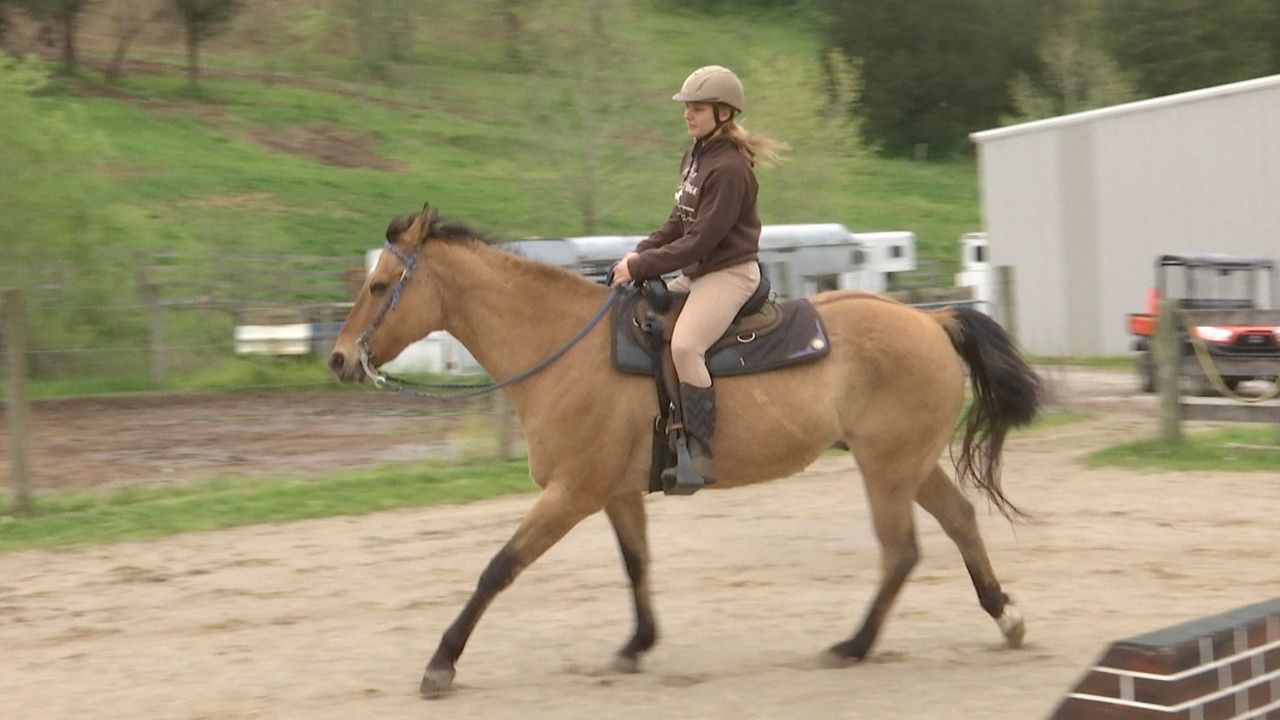 Horseback riding as popular as ever at one northern Kentucky farm

MELBOURNE, Ky. — Kentucky’s interest in horseback riding may be at its peak around the time of the Kentucky Derby, but for many Kentuckians it’s a year round passion.

In fact, the owner of one northern Kentucky farm said she’s seen an increase in people coming to ride horses over the last few years.

What it takes to be a good horseback rider is pretty simple, Anna Zinkhon said. 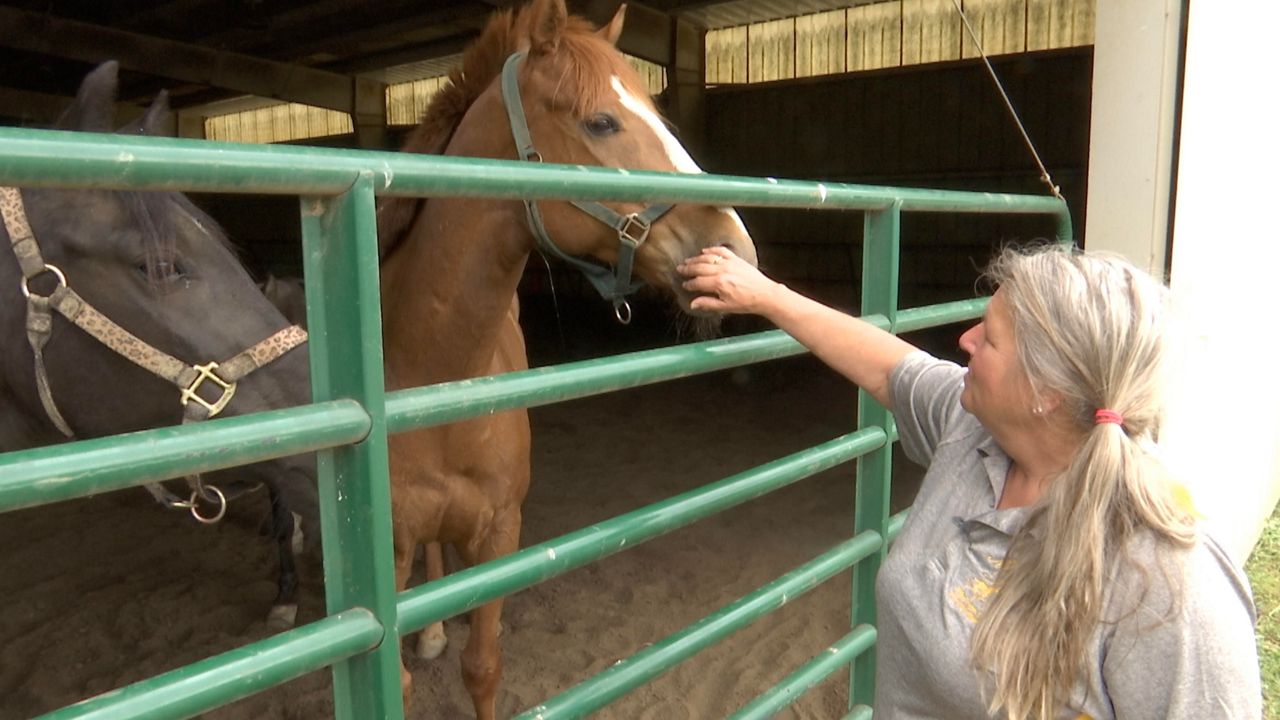 “You’re the leader. And you have to show that dominance. And that’s what changes people when they learn that. That’s why horse women can be so strong to some people, and accomplished to others,” she said. “It’s just about how you look at it.”

It’s tough to argue that both ‘strong’ and ‘accomplished’ don’t describe Zinkhon.

The oldest of six children, Zinkhon, grew up on a farm a few miles away from her current farm. Horses were in her dad’s blood, she said. And now they’re in hers.

“Of the six kids, I’m the only one who’s kind of made it a life addiction,” Zinkhon said.

Misty Ridge Farm was an endeavor she and her husband Greg Zinkhon set out on in the 90s.

“In the beginning, it was all about wanting to do my own showing, and things like that. We ended up building an indoor arena, my husband and I, so we could ride in the winter,” she said.

Before they realized their full vision, tragedy struck.

“During the construction, he was killed in a car accident. And I decided to go ahead and still build it,” Zinkhon said. “And I gave myself five years working my corporate job to get it established.”

“I discovered a whole new passion for the industry. It wasn’t just about my riding. It’s what the horses do for the humans,” she said. “And what you’re able to help them learn about themselves through horses, it’s just unbelievable.”

Misty Ridge is now a 40-acre farm featuring camping, trail rides and riding lessons. The farm even has some retired thoroughbred racing horses. 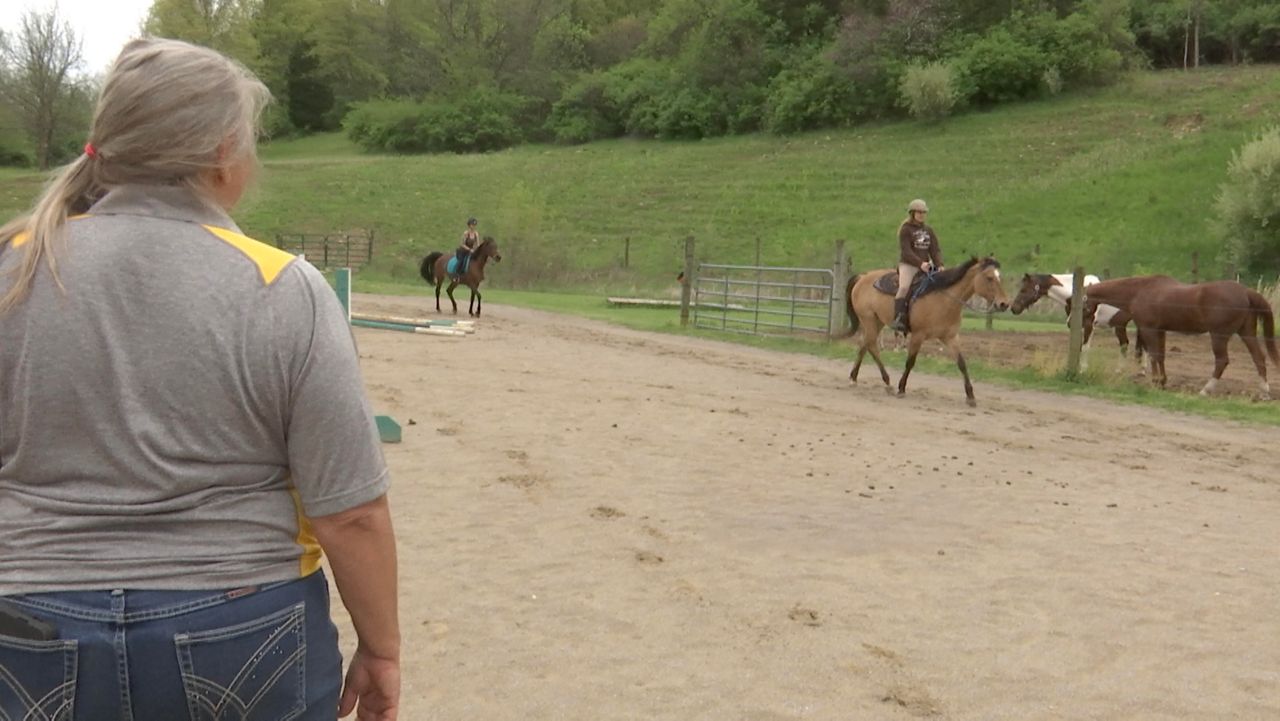 She said she has a waiting list of 50 to 60 people for riding lessons. Boarding stalls are also filled up.

“We have not been able to catch up since then. It’s been amazing the amount of people that have a renewed interest,” Zinkhon said. “Especially when people go, ‘Oh I rode one time as a kid with my friend, and I fell off, and I’ve never been on again. I was petrified.’ And we help them get past those memories, and help reassure them, and show them how they can still do it, and be safe. And they leave with a whole different outlook on life.”

Maggie Schroeder started taking horseback riding lessons at the farm 10 years ago. Now she teaches them and helps in other ways around the farm.

“This is my number one hobby. This is my favorite thing I’ve ever chosen to do, literally throughout my entire life,” Schroeder said. “Actually, when I first started riding horses, I didn’t like it.. I was small. I was scared. If you’re scared, go for it. You’ll realize it’s a lot of hard work, but it’s easy once you figure it out. It takes some persistence.”

After spending 10 years as a kid riding horses, it had only been four months of taking lessons at Misty Ridge Farm for Langlee King in early May. But she was hooked.

“I mean, I think the bond you can form with a horse is just so special. Like, I love Molly,” she said, petting the horse she had been leasing. “I’m just in my happy place when I’m here.”

Asked how she would describe the special bond between horse and human, Zinkhon had an interesting response.

“Everybody’s familiar with the warm and fuzzy feeling of a dog and cat. And you get that. But you also, when you’re on a horse. You’ve got this power that you’re controlling. You know, this 1,200 pound animal listens to you through your fingers and your butt cheeks,” she said.

For those interested in signing up for lessons or trail rides, head over to Misty Ridge Farm’s website.