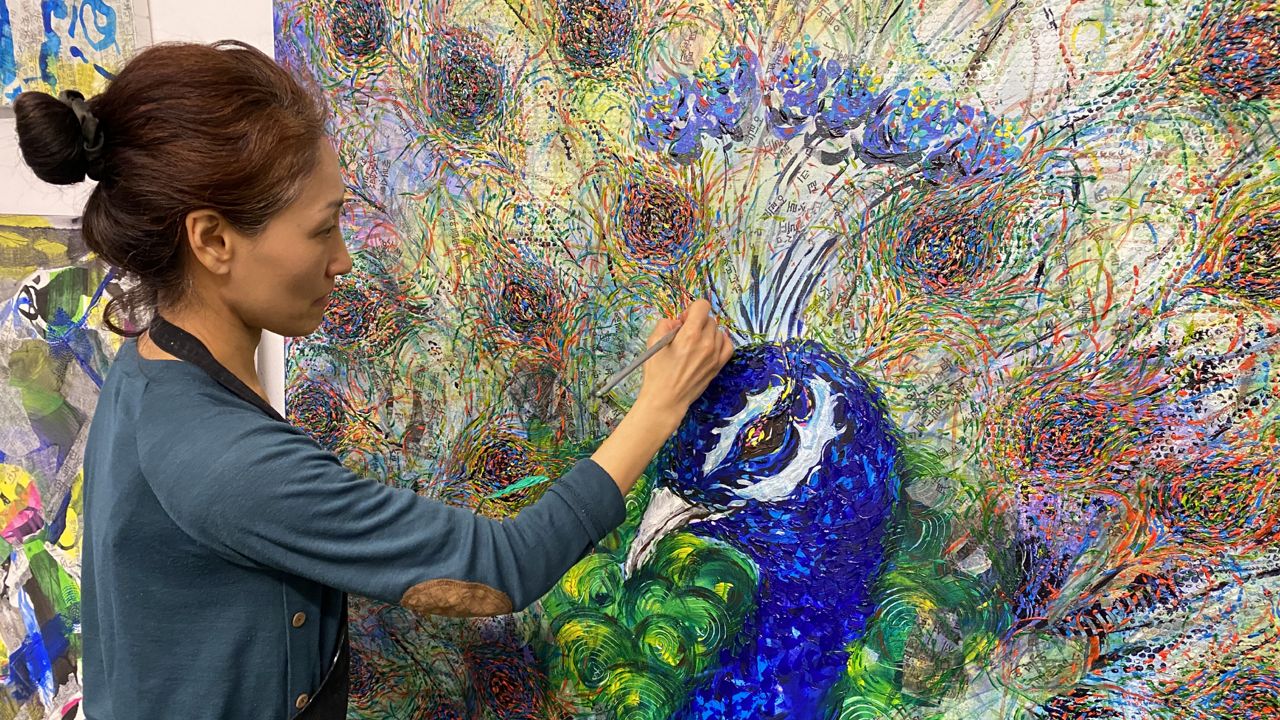 'Every piece is a conversation with me': Artist wants to share South Korean culture through her art

Spectrum News 1 met a Kentuckian who uses her art to educate and inspire people and her students about South Korean history and culture.

Expression, meaning and thought flows from artist Suyun Son’s paintbrushes, when she creates her works of art.

“When I’m painting, I’m thinking about my mother’s life, my grandmother’s life. I think about their history too,” Suyun Son, a University of Louisville graduate student explained to Spectrum News 1.

Originally from Seoul, South Korea, Son began her artistic journey in high school. She studied art there before she came to the United States in 2001. Son came to Kentucky in 2017. Growing up, she says art was always in her environment. Her mother was an artist who was always writing calligraphy. When Son was younger, she helped her mother grind the ink she used. Her father was a photographer.

“Art is a different freedom. We speak a different language, but art we can show is no boundaries, no limitations, no logic.” Son explained. “We can show totally our freedom. When I create art, every piece is a conversation with me.”

Her work has people talking. Earlier this year, contemporary works created by Son, other students and faculty were featured in the Asia in Motion exhibition, at the University of Louisville’s Hite Art Institute.

The Exhibit showcased works by artists of Asian descent.

“I felt I am proud of I’m Korean-American and this art show was keep challenging me to keep moving and keep continuing to work for as an artist.” Son explained.

Son is a wife and mother and says her work matters. When people see and experience her art, she wants them to understand something about South Korean culture and history.

“I want their eyes to pay more attention to we are living in America, but we are all hybrid,” Son explained.

“It could be Chinese letters, it could be South Korean Hangul. So, I want them to experience, think about their identity. We’re not divided, we’re not stopping, we’re still moving.”

Son is getting her Master’s Degree in Art at UofL, and enjoys teaching her students. She said she wanted to see more Asian art, so she created some herself. Son has worked as an artist in different parts of the U.S. A few years ago, she made a change and literally incorporated the Korean language into some of her works.

“I want to show the colors, for five colors is Korean [Says a Korean word] they have all different meanings. It’s black. I use a black tube. For Korean, color theory, black is clean and pure and fluidity. It’s not western culture where black is dark and some negative energy. In Korean culture, black is very pure. Also, I use gold. It’s very important for me, I learned from the langue in Korea and I know the world from my mother tongue.” Son explained.

Through every stroke of a brush that becomes a beautiful work of art, she hopes to inspire people through her art to learn more.

“A South Korean is very smart, sexy. They were very diligent, work hard, workaholic.” Son explained. “I really want to show this America that South Korea is not only a small country. They are economy. We’re scientists. They’re moving forward and they are leaders.”

As Son shares her works with the world about where she comes from.

Son said she’s ready to teaching undergraduate students for the first time this fall. She had some words of encouragement. She said anyone can be an artist.