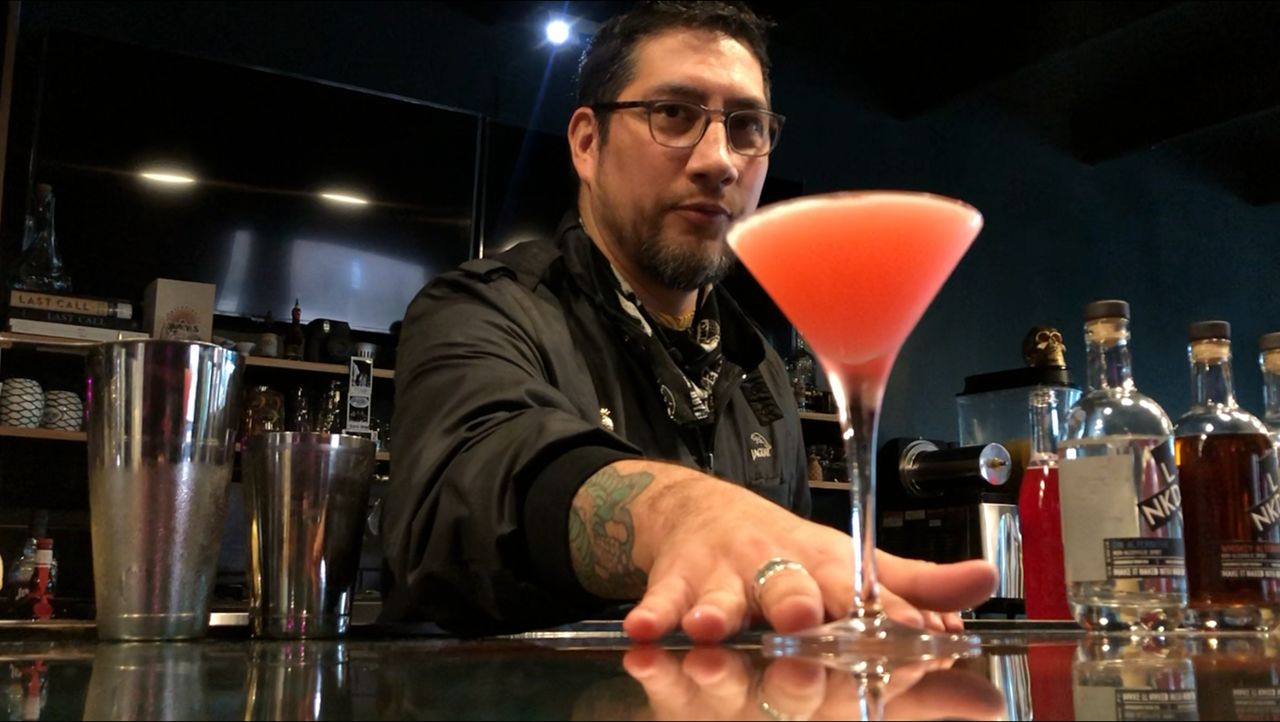 Lately, Louisville-based Gold Bar's Beverage Director Eron Plevan has been topping off the bar’s shelf with some non-spirited spirits, such as non-alcoholic gin, tequila, and whiskey. Some may think no alcohol behind the bar is dry, but Plevan said it’s the opposite of boring. (Spectrum News 1 / Eileen Street)

LOUISVILLE, Ky. — When someone quits drinking alcohol or lessens their intake, they may wonder what their social life will look like when they make the change.

A booming market across the globe is taking on that challenge for some people by serving no- and low-alcoholic (no/low alcohol) products, from spirits to beer. A new Louisville-based non-spirited spirits brand, NKD LDY (pronounced Naked Lady), is tapping into that growing market in Bourbon Country and beyond.

Eron Plevan, who started bar tending almost 12 years ago, loves the hospitality and creativity of his craft.

“You would treat cocktails very much like you would if you were in the kitchen exploring food ingredients. Cocktails can be just as complex, just as deep, and they are a work of art, sometimes,” Plevan, who is the bar manager and beverage director at Gold Bar in Louisville, explained.

From managing the bar staff to choosing what’s poured, Plevan said he does a bit of everything at Gold Bar. Lately, he’s been topping off the bar’s shelf with some non-spirited spirits, such as non-alcoholic gin, tequila, and whiskey. Some may think no alcohol behind the bar is dry, but Plevan explained it’s the opposite of boring.

“If you’re a cocktail nerd and really into the science, non-alcoholic spirits are just as complex, if not more, than regular spirit production,” Plevan said.

Plevan has seen a boom of new no/low alcoholic spirits and beer in the last three years. With the latter being the most requested, he said. Regarding the popularity of mocktails at Gold Bar, Plevan said makes anywhere from a handful of mocktails in a week to that number in a night, depending on bar goers’ demands.

“Sometimes, you know, people come in just for the mocktail menu because we posted about it or we advertised it,” Plevan told Spectrum News 1. “And they just wanna try like everything. We have to cut them off, not because they are drunk, because maybe sugar,” he jokingly added.

Louisville-native Becca Garnder gave up alcohol four years ago because she felt she was crossing a line with why she drank.

“I went from being just like a social drinker to realizing I was using it not to feel the feelings I was feeling, and so I just decided to remove it from my shelf of coping mechanisms, and it was the best decision I ever made,” she told Spectrum News 1.

However, Garnder also said she felt alienated from many social experiences, such as going to concerts, bars, and out dancing.

“And so I was really nostalgic for living my full life, even though I felt amazing.”

Sober life eventually led Gardner to distill the script of her own life. During a weeklong interview process for her dream job, Gardner said she was at a bar in London when she ordered a non-alcoholic Manhattan, which led to her to rethink her career dreams. That mocktail experience led Garnder to leave her consulting career and life in New York City behind. She moved back home to Kentucky to follow her newfound dream of starting a non-alcoholic spirits company in an industry she had never previously worked in.

Her new dream became a reality when NKD LDY was born, which comprises three non-alcoholic spirits: whiskey, tequila, and gin.

“My customers are usually not folks like me, [who] don’t drink at all. It’s people [who] just want more options and to make the best choice for them, without sacrificing anything,” Gardner said.

“It’s a process called cool distillation or vacuum distillation. We have the ability to remove the ethanol from the spirits, while preserving a lot of their natural essence,” Gardner explained. “Then, we build back up the flavor profile with other natural flavors, so people still have an experience of having a real spirit that has a lot of the flavors that you just can’t re-create in a lab.”

“Non-alcoholic spirits like NKD LDY really invite us to experiment with what’s going on in them, as we would a regular spirit. So I treat this just like I would a gin, considering all of the botanicals in it. I treat the bourbon alternative as I would a bourbon, and I think about the flavors going on there and [look] for different things to accent them,” Plevan told Spectrum News 1.

It’s all about drinking non-alcoholic spirits properly, Plevan said, just like one would do with normal spirits. With that spirit, creativity kicks in.

NKD LDY is currently served at the following bars:

Gardner said the plan is to focus on expanding to more Louisville bars and then expand to Nashville bars in about two months. Atlanta and Los Angeles are also on the horizon, Gardner added.

If you’re interested in trying NKD LDY, you can also purchase its non-alcoholic spirits online.