Co-host of the Bourbon Lens podcast Jake Lewellen, 32, of Louisville, will compete in the World’s Top Whiskey Taster finale as the southeast regional winner. The original field of 5,000 participants is down to five regional finalists who will compete at 6 p.m. Saturday, Dec. 11, at Bardstown Bourbon Company distillery in Bardstown. The winner of the competition will not only win the title of “World’s Top Whiskey Taster” but also earn the opportunity to make their own bourbon blend through a full scholarship to Moonshine University and $20,000 in cash.

The World’s Top Whiskey Taster does not challenge mixologists to create interesting cocktails. Instead, competitors must identify various whiskeys by distinct traits in a blind taste test.

“I got into bourbon not even wanting to drink it,” Lewellen said. “My buddy wanted to start a podcast, and that's how I got started.”

Lewellen is a national sales executive for Humana. His work-related travel has allowed him to sharpen his bourbon-tasting skills.

“I have a territory I cover and what's made it fun in the last three years is I've been able to go pick up bourbon from all across the country,” he said. I can find things that I can't find in Kentucky. People ask me why I’m looking for bourbon if I’m from Kentucky. I tell them they get allocations we don't get.”

His interest in the contest began when he watched last year’s competition on YouTube, which took place virtually because of COVID-19.

“I thought after watching it that I could do it,” he said. At that point, we were two years in on the podcast, so we started doing random tastings on the podcast. I was pretty good at it — I was nailing the stuff. I knew not long after that when the competition happened again, I was going to do it.” Not long after, representatives from the Bardstown Bourbon Company reached out about promoting the competition on the podcast. After making it through the first round, Lewellen then competed in a regional competition, which took place in Chicago, Los Angeles, Dallas, New York or Atlanta.

Lewellen scored a 75 in the regional competition, the second-highest behind Michelle Hagen, of Cincinnati, who scored a 95 in the Chicago regional.

“She's phenomenal,” Lewellen said about Hagen. “She's a flavorologist. I'm scared of her. I feel like she's the odds-on favorite to win.”

The way the competition works is each contestant gets three rounds with three glasses in front of them. They must identify the grain in the first round — corn, rye or barley. The second round is a new set of glasses, and contestants must determine the proof. The third round of tasting is for competitors to determine the age.

“Age is a little bit easier,” Lewellen said. “A lot of people get kind of wonky on age, but it is really not that hard. When you break it down into age ranges, you can tell a really young whiskey versus a really old whiskey. The middle part that gives you such a range, which is five to nine years, you can get five to nine pretty easily.”

A bonus round of one glass challenges contestants to know the grain, age, proof, distillery and proof point. Lewellen said the bonus round requires doing some homework and truly puts one’s bourbon knowledge to the test. 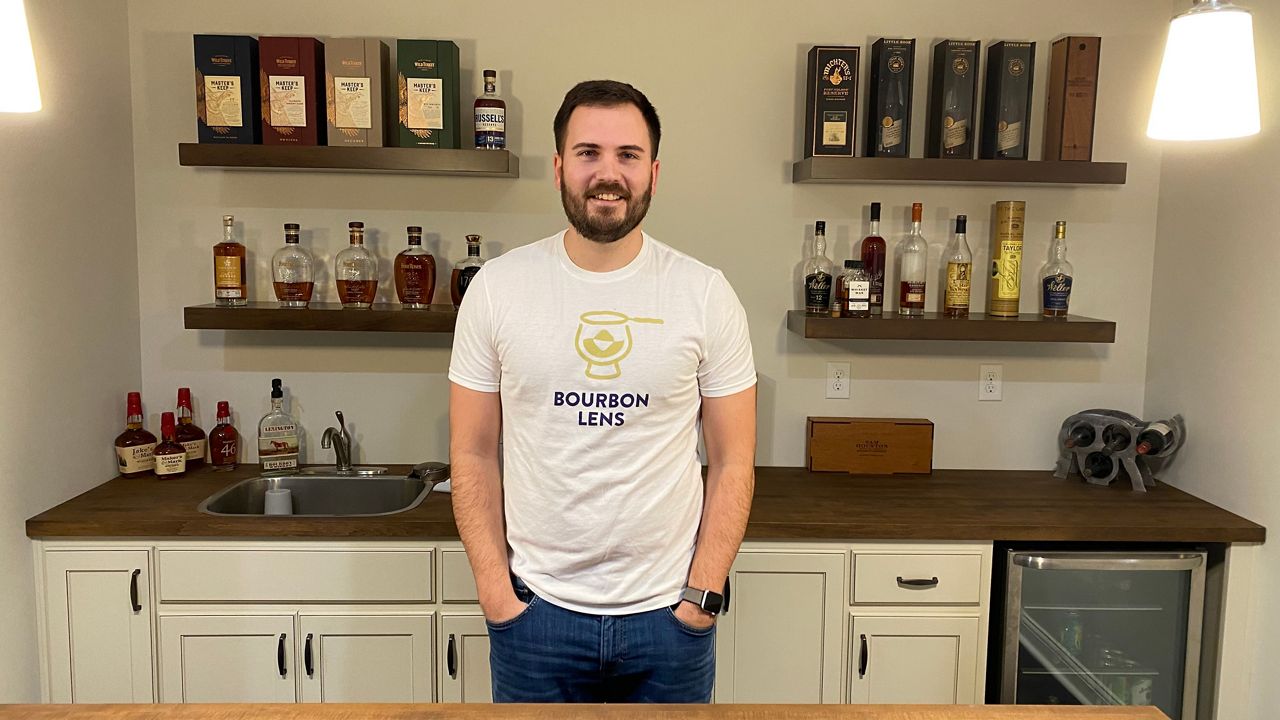 “In the bonus round at regionals, it was a rye whiskey. It was between 100 and 120 proof, and it was between six or five and 10 years old,” he said. “I knew all those. I thought it was an Indiana rye, but it was Pikesville rye. Because it was rye, it could have been a lot of different places, but with the age I thought it was, it can only be a few. You have to know enough about what distilleries are putting out from an age statement perspective. As you can do that, you can start to do a little bit of deductive reasoning into getting into who it may be.”

Lewellen has continued the strategy that helped him win regionals: Blind whiskey tastings in his basement and chatting with hundreds of bourbon enthusiasts during his Monday podcasts and Thursday Instagram live sessions to prepare for the finals.

“I would do blind samples,” he said. “I would have my wife pour a few, and she would just write it down in a book. Then, I would just sniff and taste and sniff and taste different tastes. I didn't know how many were going to be. I didn't know any of the scenarios until I got there. I would do 10 or 15, and, of course, I wouldn't drink them all right because that would be a nasty hangover. I would put all types of stuff — Irish whiskey, Scotch, single malt bourbon, rye, corn whiskey, wheat whiskey — so I have it all. The night before, I smelled 15 bottles, did a blind four, and got all of them right, but one — I was one proof point off. I led every round, so I felt pretty confident during that last round.”

As the lone finalist from Kentucky, Lewellen does not think his counterparts are intimidated by his being a native of the Bourbon Capital of the World.

“I was talking with a guy I know through Instagram and told me just because I’m from Kentucky doesn't mean I know more, but you have access to more,” he said. “I'm around it a lot. The smell of bourbon isn't too far. If I want to smell it from a distillery, I can go smell mash today if I want to. Most people don't have that ability. I think just being around it a little bit more helps.”

Lewellen’s mantra for bourbon is that it is meant to be shared among friends and drunk while telling stories. When he competes Dec. 11 in the contest against Hagen, Ben Ward, of New York City, Michael James Outcalt, of Denver, and George LaBoda, of Los Angeles, it is not all about winning.

“This whole experience is definitely a story worthy of telling over a glass of bourbon,” he said.