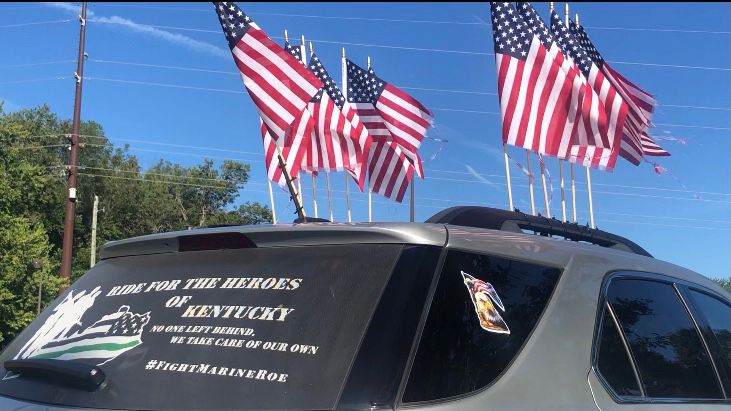 Ride For The Heroes Of Kentucky held a ride in honor of the 13 Marines lost in Afghanistan last month. (Spectrum News 1/Crystal Sicard)

Memorial ride honors soldiers, families of those killed in Afghanistan

PARIS, Ky. — Ride for the Heroes of Kentucky, a non-profit based in Paris, led a memorial ride on Sunday for the 13 soldiers who died in Afghanistan last month.


13 names and 13 bells in honor of the 13 soldiers who died in Afghanistan last month.

Kathy Garrison founded Ride for the Heroes of Kentucky in honor of her father and brother. She's been leading rides throughout the state for more than four years.

“When we lose that big amount of people, that is a huge part of this country. It really touches home for us,” Garrison said. “My father and brother were both veterans. My dad was in the Army and National Guard, and my brother was my Marine. He's my hero."

The memorial ride started in Paris Sunday morning, and participants rode 99 miles throughout central Kentucky with flags and a police escort.

Regina Austin, one of the motorcyclists participating in the ride, said memorial rides like that one hold a special place in her heart.

“It’s a little emotional, I'm proud of my country, I love my flag. If it wasn't for the veterans, I probably wouldn't be here right now,” Austin said.

Garrison said she knows her brother and dad are proud of her and her mission to make a change. She hopes the ride sends a message of hope to the families of the soldiers.

“The first time I ever told my brother what I was doing, he looked at me and he said, 'I'm so proud of you.' And with knowing that, it just drives me to be able to help and want to do more in different communities,” Garrison said.