Sydney Cornett, left, and Trey McEntee, of Georgetown, stand in front of their 2006 Thomas Freightliner, a former school bus being converted into a tiny home. (Brandon Roberts/Spectrum News 1)

GEORGETOWN, Ky. — The trend of converting old school buses and other vehicles into tiny homes or campers became a craze during the pandemic. Traveling the country in a custom-built RV is a dream for most people, but it's becoming a reality for one Georgetown couple.


Trey McEntee, 27, originally from Baltimore, and his girlfriend, Sydney Cornett, 25, of Georgetown, have spent more than a year converting a 2006 Thomas Freightliner school bus into their tiny home. Both graduates of Eastern Kentucky University, Cornett, an event planner, and McEntee, who worked in the hemp industry, took advantage of the downtime created by the pandemic by purchasing the former Breathitt County school bus from a friend for $2,500.

“That's a steal,” McEntee said. “Very inexpensive for a running, driving vehicle like this with a Caterpillar motor. Once we got it, I looked at Sydney and said, ‘Let's take a month and see if we can design a floor plan and if it's something we really want to do.’ After about two weeks, we started ripping seats out of it – I don't even think it was two weeks. It might have been a week.”

Cornett and McEntee plan to live on the bus for a while once it's complete. Until then, the couple plans to use it for traveling to Ohio and Florida to assist in putting together music festivals.

“It's coming down the homestretch,” Cornett said about finishing the project. 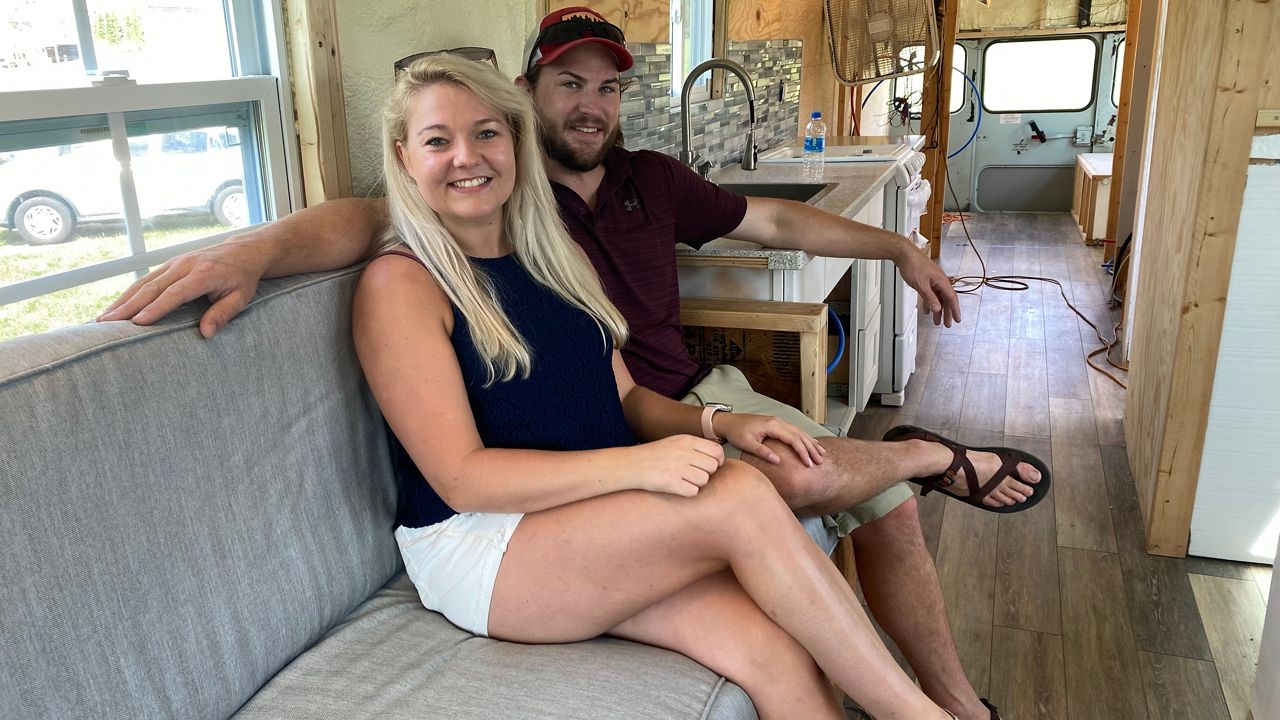 Sydney Cornett, left, and Trey McEntee sit inside a school bus they are converting into an RV. (Brandon Roberts/Spectrum News 1)

The bright blue bus with white trim is outfitted with residential windows, a stove, a bathroom with a shower and a 32-inch wide door.

“We wanted it to be blue, but we thought the paint we got was going to be a little darker,” Cornett said. “When we starting painting it, we were like, ‘Wow, that’s really bright.’ But then, we figured it’s a school bus, so let’s have some fun with it.”

The bus took its maiden voyage, a trip to Baltimore, the first week of September.

“It took 13 hours and really put it to the test,” McEntee said.

Cornett and McEntee said frustration has often made them rethink their plans, but support from friends and neighbors has helped them persevere.

“We've sat for hours and thought about getting rid of it,” McEntee said. “In the middle of the project, we’d get so frustrated with every screw on the outside of the bus having to be pre-drilled — that's 3,500 screws. That alone was the most frustrating part.”

Around those times, people in their neighborhood off Iron Works Road would offer their support. “People would come over and tell us we are living their dream,” Cornett said. “They would encourage us to keep going.”

McEntee said he estimates the project’s total cost will be around $20,000, much less than an RV of comparable size, even with most of the work done by professionals.

“Friends, parents, electricians and other people that we know all just kind of pitched in,” McEntee said. “The closet wasn't put together without, I think, four different people stepping in and just doing electrical work inside of it,” McEntee said, with Cornett adding, “We are very fortunate with the friends that we have.”