LOUISVILLE, Ky. — Dr. Mike Bittenbender has heard it all from his unvaccinated patients.

“There are all kinds of conspiracy theories,” the New Albany, Indiana family doctor told Spectrum News 1. “There’s metal in it. There’s a chip in it. They’re tracking us. I've seen some people that have just made me want to bang my head into the wall.”

As the delta variant of COVID-19 began sending cases surging earlier this month, Bittenbender said he grew increasingly vexed by those who refuse safe, free and effective vaccines.

“It's just consternation,” he said. “They won't vaccinate. They won’t do it. I got very frustrated.”

But now, he’s trying something new. Bittenbender is leaving behind his frustration and adopting a more understanding approach to vaccine hesitancy.

It started with a post on his subdivision’s Facebook group, telling his neighbors that he's glad to talk through any questions they have about the COVID-19 vaccines.

“I actually had several people that had honest questions and were open to having some dialogue,” he said. Bittenbender then took his message to Twitter, where he posted a eight-tweet thread imploring people to take the delta variant seriously and to get vaccinated, if not for themselves, then for “someone who loves you and would worry greatly about you if hospitalized or would miss you if you die.”

If you don't feel well, mask up, vaxed or not. I would get a 2-dose vaccine for best effect. I would ask that if you won't get the vaccine for yourself, get it for someone who loves you and would worry greatly about you if hospitalized or would miss you if you die.

Bittenbender said he’s trying to encourage as many people as he can to get vaccinated due to the rise of the delta variant. “It’s more contagious. It's more volatile. It's just nastier,” he said.

And it’s driving cases back up in Kentucky, which has seen its positivity rate quadruple since the start of July. At the start of the month, the state's seven-day positivity rate was 1.99%. On Tuesday, it was 8.11%. That's the highest it’s been since Feb., when vaccines were hard to come by.

At a press conference Monday, Kentucky health commissioner Dr. Steven Stack expressed empathy for health professionals like Bittenbender. "Our poor doctors and nurses and therapists and pharmacists — they're exhausted from this because, tragically, this is a vaccine-manageable condition,” he said. “This should not be happening now.”

Bittenbender is trying to do his part to stop it by speaking compassionately to patients, neighbors and strangers on the internet. 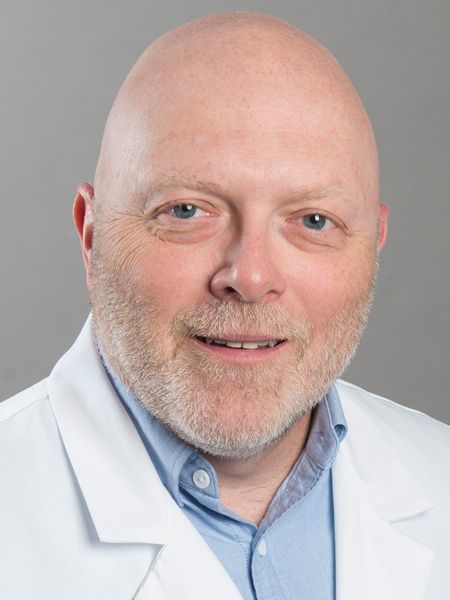 Dr. Mike Bittenbender is encouraging his patients to get vaccinated against COVID-19. (Baptist Hospital)

“If I can just get people to have a conversation with me,” he said, “maybe I can get them to open up to it.”

And he’s willing to have conversations that other doctors may not. Bittenbender acknowledged that young, healthy people have honest concerns about getting vaccinated. They understand that their risk of dying from COVID-19 is small, but they don’t understand the other risks of the illness, Bittenbender said.

“My concern when I talk with younger people is that the long-term complications of COVID are like having a stroke,” he said. According to the CDC, post-COVID conditions can last for weeks or months. Symptoms can include everything from a persistent cough to autoimmune disorders. “We’re still learning about this,” Bittenbender said.

Another tool he uses to encourage young people to get vaccinated is their grandparents. He had a woman in his office this week who was concerned about her grandson’s unwillingness to get the shot. Bittenbender encouraged her to “play the grandma card."

“If you ask them to vaccinate for their own protection, they don't feel like they need it,” he said of some young people. “So say, ‘Do it for me because I’m your grandmother and I love you.’”

Ultimately, Bittenbender said people need to understand that the delta variant is dangerous; it does not discriminate, and vaccination is the best way to slow it down.

“Delta didn't care about politics,” he said. “It doesn't care about your religion. Delta doesn’t care about anything other than that you’re a host, and it wants to eat.”