Ember is the wolf-dog hybrid with the highest amount of confirmed wolf in her (via DNA testing) at Wolf Run Wildlife Refuge. Ember is 87.5% Arctic Wolf and 12.5% Syberian Husky. (Spectrum News 1/Eileen Street)

NICHOLASVILLE, Ky. — A mix between a domesticated dog and wolf makes a wolf-dog hybrid, which some people like to have as pets. However, Wolf Run Wildlife Refuge in Central Kentucky has been on a mission to stop that, while caring for the wolf-dog hybrids, many whom were surrendered by their original owners.


“We just look out for them. They’ve already been through so much,” said Becca Senn, who is the animal care director and wildlife rehabilitator at Wolf Run Wildlife Refuge in Nicholasville.

Senn said Wolf Run currently has 22 wolf-dog hybrids. The main reason those canines are there, Senn said, is due to owners surrendering them.

“People, they get them as puppies and say, ‘Hey, I got a wolf,’ and don't do their research, and then they grow up and show the wolf behavior, and then they have to find a sanctuary,” Senn told Spectrum News 1.

Senn said the hybrids also come from puppy mill shutdowns, cruelty cases and animal shelters that don’t adopt out wolf-dog hybrids and may euthanize them.

“Everyone of them has totally different stories, and they are all special in their way,” she said.

For example, one of the wolf-dogs that Spectrum News 1 met is Judge, who is 62.5% Grey Wolf, 12.5% German shepherd, and 25% of other breed groups listed as wild canid and Asian. 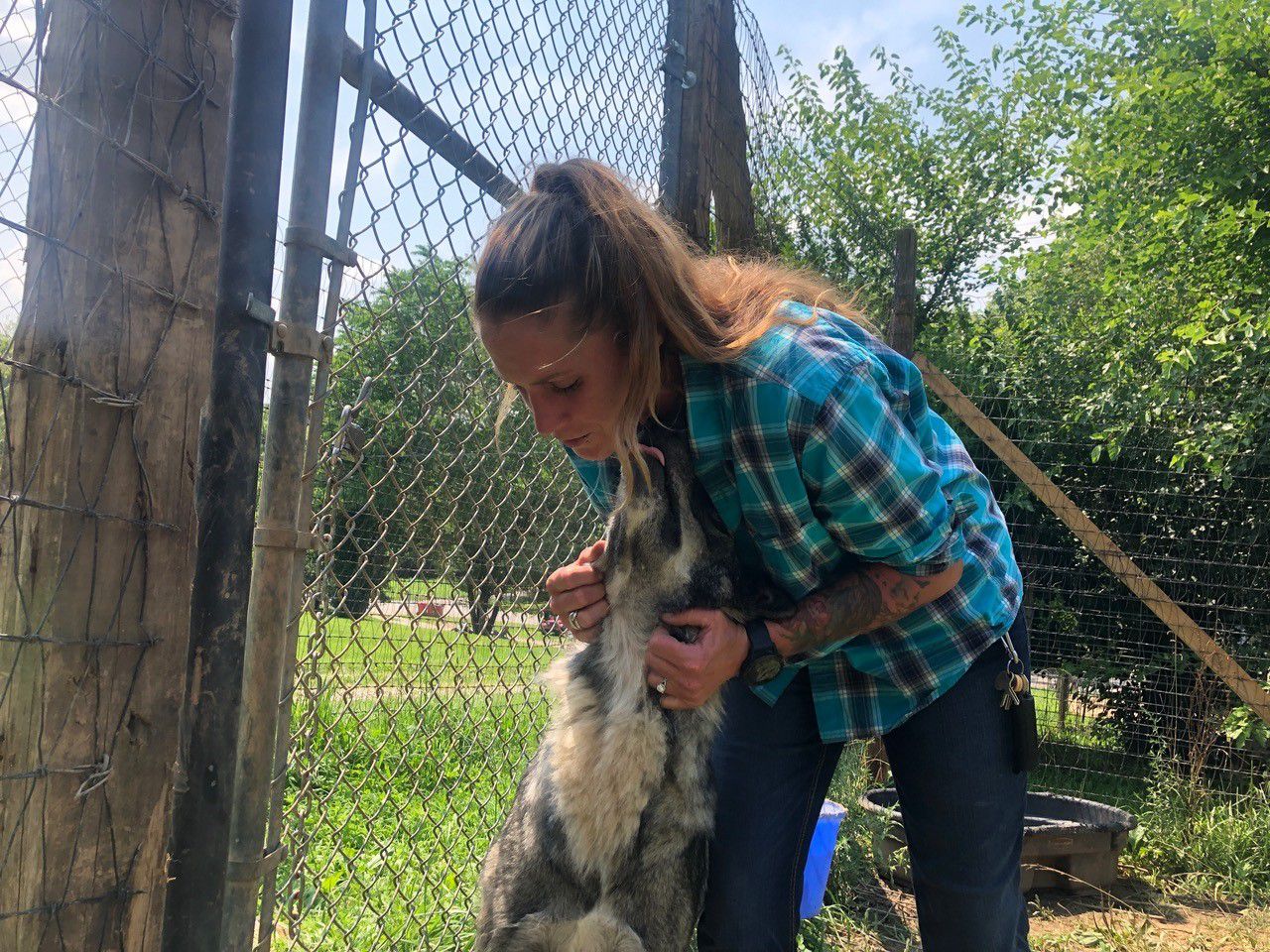 Becca Senn, animal care director and wildlife rehabilitator at Wolf Run Wildlife Refuge in Nicholasville, Ky., gets a kiss from one of the sanctuary’s wolf-dog hybrids, Judge, who is 62.5% Grey Wolf, 12.5% German Shepherd, and 25% percent of other breed groups. (Spectrum News 1/Eileen Street)

“He was an owner surrender. When we went to pick him up, he was tied out on probably at 10-15 foot cable and that was his life,” Senn said.

The nonprofit is a U.S. Department of Agriculture and Kentucky state licensed facility that does not euthanize any animal. So once a wolf-dog is brought there, it stays there.

Wolf Run isn’t open to the public and doesn’t receive any government funding. So it relies on donations and fundraisers, like a program called “Wolf Selfies,” which the organization only does with Judge.

“He’s just one of those special cases. Every once in a while, you’ll get more dog-like personality, and he’s one of those,” Senn explained.

However, a wolf selfie isn’t just about a photo with Judge and fundraising, it’s also an opportunity for Wolf Run to educate the public on why wolf-dog hybrids don’t make good pets.

“They are very hard, if not impossible, to house train. They go wherever they want. You know some people get thinking they are going to be a good guard dog, and that couldn’t be further from the truth. They just want to be left alone in their pack, doing what they do,” Senn said.

In Kentucky, “Wolf-dog hybrids of 25% or less are legal across the state. For wolf-dog hybrids over 25%, local governments have the ability to be more restrictive,” Chief Communications Officer with Kentucky’s Department of Fish and Wildlife Resources said.

For example, spokesperson Teeya Barnes with Louisville Metro Animal Services (LMAS) told Spectrum News 1 via email it is illegal to own wolf-dog hybrids within Jefferson County.

Therefore, LMAS “would not pick up or accept any animal that’s believed to be a wolf/wolf-hybrid because LMAS does not handle wildlife calls. In that case, we would contact Kentucky Fish & Wildlife,” Barnes further explained in the email.

In Lexington, it’s a different story. Assistant Chief of Lexington Fayette Animal Care and Control (LFACC) Captain Ashley Browning said via email, “In the past when a dog identified as a hybrid by its owner has entered care at LFACC, we have partnered with rescue organizations such as Wolf Run Wildlife Refuge to seek the best positive outcome for the animal.”

In addition, another consideration to take into account when having a wolf-dog hybrid as a pet is the rabies vaccine.

Dr. David Crum, president of the National Association of State Public Health Veterinarians, who is also Maryland’s state public health veterinarian, told Spectrum News 1 via email, “There are no USDA licensed parenteral rabies vaccines approved for use in wild animals or hybrids as there are no data to support their efficacy in wild or hybrid animals.”

Crum also said this shouldn’t prevent the off-label use of rabies vaccines in wolf hybrids that are kept captive or as a pet, if they are at risk of rabies infection, and could expose other animals or people.

“However, even if they are vaccinated off-label, there is a lack of understanding about viral shedding in these animals. As such, should an exposure occur (e.g., the hybrid is bitten by a rabid animal) or if the hybrid bites a person or pet, it should be managed in accordance with local regulations,” Crum explained.

Crum also said in his email that “several entities argue against the keeping of wild animals and hybrids as pets, and ownership is illegal in many jurisdictions.” He pointed to the Midwest U.S. Fish and Wildlife Service’s post “Get A Dog: Wolves Are Not Good Pets” for more info.

Wolf Run Wildlife Refuge also takes care of other wildlife in its sanctuary, from exotic birds to Bobcats. For more information on Wolf Run Wildlife Sanctuary, how to donate, how to host a “Wolf Selfie” fundraiser, or to volunteer, visit their website.

Editor's note: In the original version of this story, the reporter said the Wolf Run Wildlife Refuge was located in Danville.  It is actually located in Nicholasville. We apologize for the error.