More than half a dozen candidates want to be Louisville's next mayor. (File photo)

Louisville's mayoral race: Who's running in 2022?

LOUISVILLE, Ky. — In just over 8 months, the first votes will be cast in Louisville’s mayoral election. The May 17, 2022 primary will be followed by a Nov. 8 general election, and in Jan. of 2023 Louisville will have a new mayor for the first time in over a decade.

So far, more than a half dozen candidates have announced plans to attempt to succeed Mayor Greg Fischer, who will leave office in early 2023 after serving three consecutive terms. With the deadline to file for the race in Jan., candidates still have time to join the race. Here’s who has entered so far: 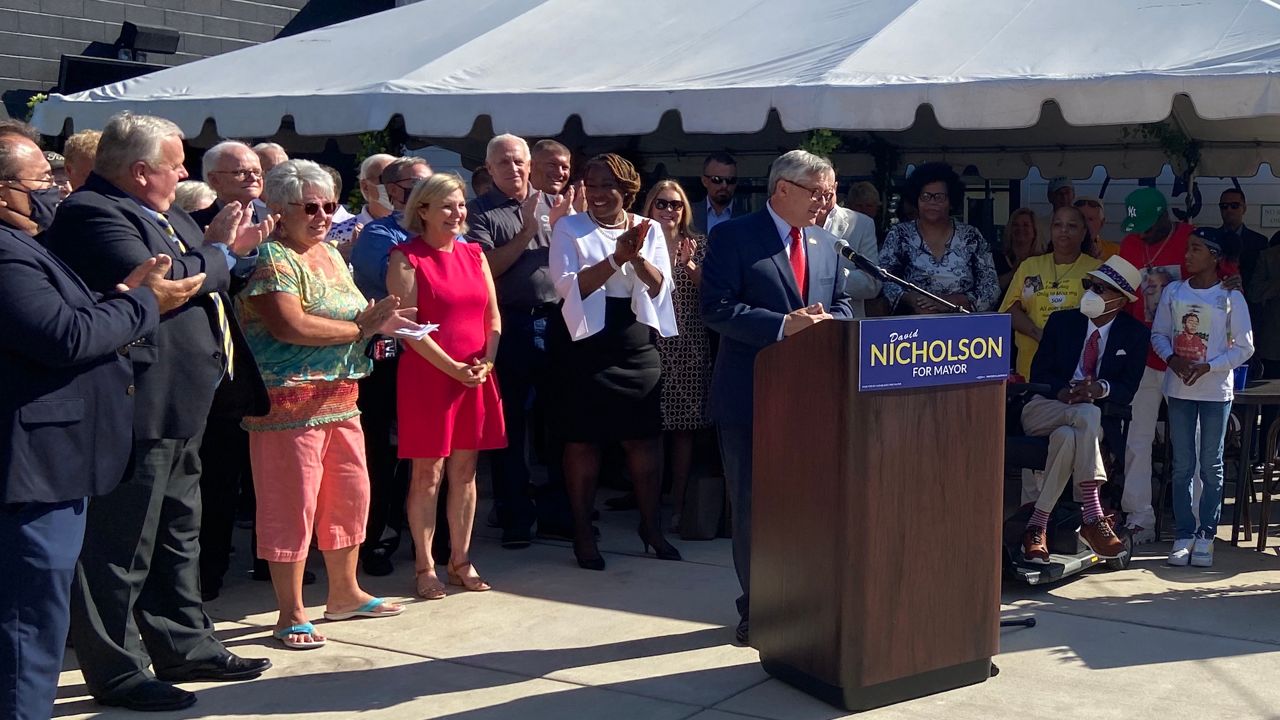 David Nicholson (D) — Jefferson County Circuit Court Clerk David L. Nicholson, who entered the race in July, held a launch event at Colonial Gardens in South Louisville Thursday. In his speech, he highlighted the city's surge in gun violence and his plans to address it. At one point, he brought forward the family of a 19-year-old who was shot and killed in 2019.

Jeffersontown mayor Bill Dieruf speaks at a Memorial Day function on May 31, 2021.

"We're here today because Louisville's future is dying in the streets," Nicholson said. As of Aug. 29, Louisville has had 137 homicides, up from 100 at this point last year. The majority of the victims have been under the age of 34.

Nicholson laid out a three-point plan to curb gun violence in Louisville, including efforts to recruit more police officers and an increase in community-based policing. He also emphasized his experience. "A rookie cannot led us out of this tragedy," he said. "We need someone with experience."

Bill Dieruf (R) — For the past decade, Bill Dieruf has served as mayor of Jeffersontown in southeast Jefferson County. That makes him the only mayor in the mayor's race. He’s also one of only two Republicans, making his path to Metro Hall more challenging than those with a D next to their name. Louisville has not had a Republican mayor since 1969.

On his website, which does not mention his party affiliation, Dieruf said he wants to be “mayor for everybody.”

“Every person in this community is entitled to justice, safety and prosperity,” it says. “Louisville Metro falls short on those fronts today.”

Timothy Findley (D) — The Rev. Timothy Findley Jr. was a frequent participant in last year’s protests against racial injustice Louisville, where he was arrested in early June. He later became involved in the effort to vaccinate Black Louisvillians by hosting a clinic at his church, the Kingdom Fellowship Christian Life Center.

A former Metro government employee in the office of Safe and Healthy Neighborhoods, Findley’s website says his “vision as mayor is to cultivate a Louisville that uplifts the voices of all people, where every person is seen and heard, respected and valued.”

Craig Greenberg (D) — Business owner Craig Greenberg is the former CEO of 21C Museum Hotels and the current co-owner of Ohio Valley Wrestling. In April, he announced his candidacy for mayor, saying the “challenges and tragedies of the past year convinced me that now was the time where I could bring my relevant experience to the office of mayor to help unify the community and move us forward.”

Greenberg made a splash early this summer with a campaign finance report showing that his campaign had raised $442,000. That total came from nearly 600 donors, with an average contribution of $719.

Greenberg has also won key endorsements. Last month, Metro Council President David James, who suspended his own campaign for mayor in August, endorsed his one-time rival. “When I was running, I promised to be a mayor that listened to everyone, worked to heal the divides of our city and always supported our working families,” James said. “My commitment to those principles remains rock solid and I know Craig shares these values with me."

Philip Molestina (R) — A pastor at He Visto la Luz Christian Church in Beuchel, Molestina announced his candidacy in early May. "Philip decided to run for mayor of Louisville because there is no clear vision on how to solve many important issues in the city," his website says.

Anthony Oxendine (D) — The funeral homeowner and former candidate for coroner in Floyd County, Indiana has said he’s considering a run for mayor.

On her website, she lists some of the issues she would prioritize as mayor, including “job insecurity, houselessness, inadequate health care and coverage, access to education & training, low wages, and a lack of social services.”

Here's an excerpt from the letter Shameka wrote to the City of Louisville on why she chose to run, what she’ll bring to the table, and why she needs your vote. You can read more here: https://t.co/ztog6NRa5P#WeGetThereTogether #TheWrightWay #Shameka4Mayor pic.twitter.com/G3Pz7vV7Ew

Margaret Trowe (I) — The Courier-Journal reported in March that the Socialists Workers Party member announced a campaign for mayor.