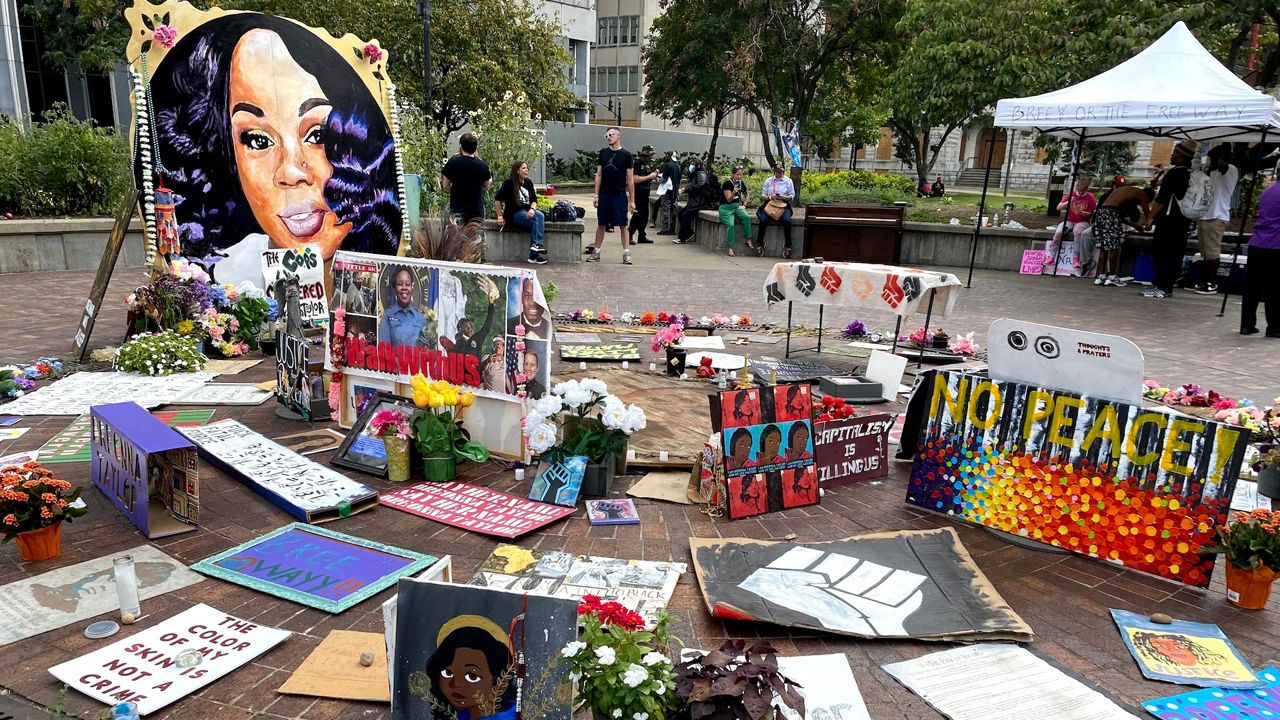 Reflecting on one year of racial justice protests in Louisville

LOUISVILLE, Ky. — Shortly after the release of 911 audio from the night Breonna Taylor died, hundreds gathered to protest the actions of Louisville Metro Police, kicking off months of nightly rallies in streets across the city.

“If we don’t protest now, our future, it’s a problem,” protester Chris Wells said. “That’s why we keep going.”


Wells remembers watching a live stream of protests the night of May 28, 2020, and feeling compelled to join.

“Something told me I had to do something, because the generations before us and before them and before them — then it was Martin Luther King — somewhere they failed us,” Wells said.

The protests, which coincided with the death of George Floyd, led to clashes with police, and eventually, a shooting that left several people injured at Jefferson Square Park.

“It looked like a warzone down here,” Wells said.

Protests continued every night for months, and Wells was there each night.

The only charges filed were three counts of wanton endangerment against Hankison for shots fired into a neighboring apartment. He’s scheduled to stand trial Feb. 1, 2022.

Louisville Metro Councilwoman Keisha Dorsey, who represents Shively and parts of Louisville’s West End in the city’s third district, said she’s encouraged by some progress made in the year since protests started.

She points to recent investments in low-income communities, assistance given to Black-owned businesses and Mayor Fischer declaring racism a public health crisis.

“We have begun to understand that the plight of African Americans has not changed in this country,” Dorsey said. “The biggest thing about that is this really robust but difficult conversation about what it means to be a minority and what it means to be Black.”

More conversations, she said, need to be had about other issues like how drug laws are enforced and more general police reforms.

But the bigger issues are more systemic, and Dorsey said the solution requires more investments in infrastructure in lower-income Black communities.

“There is a movement that has started and the boiling point has been reached,” Dorsey said of her initial reaction to the protests on May 28. “I have not seen Louisville ever turn out like that. Not Black Louisville. Not white Louisville. Louisville showed up.”

Wells said people will continue rallying in the streets until there’s more accountability.

A few days into the protests, the Kentucky National Guard and Louisville Metro Police Department officers responded to a crowd gathered at 26th and Broadway in the city’s West End.

They eventually opened fire on David McAtee’s home and BBQ restaurant, killing him. Forensic analysis released by the state showed a bullet fired by a guardsmen killed McAtee.

The names of the guardsmen involved have not been released.

His brother, Jamie McAtee, was part of a group that was arrested Thursday while honoring his brother.

“We’re out here, peacefully, trying to get justice for our people, plain and simple,” McAtee said.

McAtee was arrested for obstructing a highway and unlawful assembly near his brother’s restaurant. Police took four others into custody as well. McAtee said he didn’t hear the officers telling them to disburse.

“There has to be a change, and there’s nothing out here besides people that are in our communities that are trying to get that change,” McAtee said. “We come out here peacefully, we try to keep it a peaceful thing, and if police want to keep acting like that, it’s absolutely absurd.”

McAtee held the rally after Jefferson County Commonwealth’s Attorney Thomas Wine announced he would not pursue state charges against anyone involved in his brother’s death.

McAtee is planning more events as the year anniversary of his brother’s death approaches.