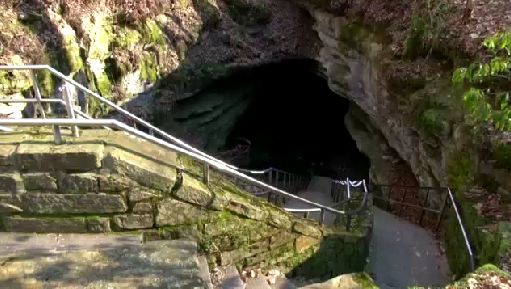 There are busy seasons and there are slow ones.  At Mammoth Cave National Park near Cave City, Kentucky, January is the slowest month all year but the partial government shutdown is causing the number of visitors to dwindle.  While the park grounds remain open during the shutdown, access to the cave system, the world’s longest is closed off.

“It’s quiet.  It’s very quiet,” chuckles Sharon Tabor.  Tabor isn’t a member of park staff.  They’ve all been sent home.  Tabor is a volunteer with the organization, Friends of Mammoth Cave.  On Thursday, January 10th, Tabor is keeping warm in her idling car parked in front of the Mammoth Cave Visitor Center. The, “VC,” is closed.  When park visitors arrive, unaware of the shutdown’s impact Tabor welcomes them with the unfortunate news.  “The cave is not open for tours.  The Visitor Center is not open but the trails are available for people to walk,” Tabor says.

Helen Siewers is on site as well.  Siewers is also a member of, Friends of Mammoth Cave. “When people do make a trip to the park they see a friendly face and get some information from a human being about how they can change their plans,” Siewers adds.  Her information table has brochures for nearby privately owned caves selling their own cave tours.

Nothing compares, however, to Mammoth Cave with its more than 400 mapped passages.  The entire park encompasses fifty-three thousand acres.  Amanda Maner and Chad Rodriguez drove to experience it all but were unaware of the limited access.  The couple lives in Savannah, Georgia.  “We drove an hour and thirty minutes to get here.  Visiting some friends in Louisville and he said it’s something to go check out,” Rodriguez tells Spectrum News 1.  Rodriguez and Maner are disappointed they can’t dive in but encouraged, at least, by how tidy the park is.

Recently, visitors to other national parks across the country have reported illegal camping and littering but Mammoth, objectively, is in perfect condition at this point of the shutdown.  “I haven’t noticed any trash, “ Maner reports.

Volunteer Helen Siewers confirms, the grounds are being respected.  “Everyone who is coming to the park is maintaining a sense of decorum,” Siewers says.

As to the shutdown and how it’s impacting Kentucky’s only national park Siewers says plainly, “It’s unfortunate. “