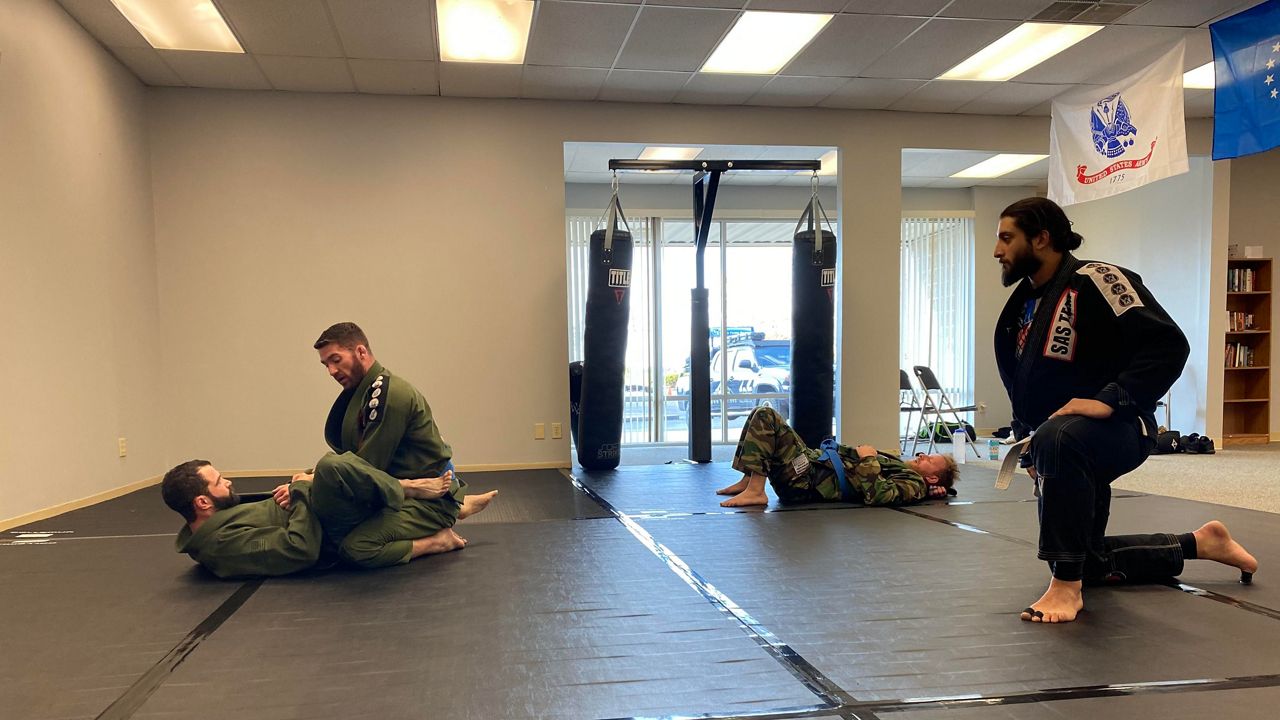 Zach McGuffey (bottom left) works out with other veterans, practicing things like jiu-jitsu and yoga.

Six years after attempted suicide, veteran connecting others to support through jiu-jitsu

WILDER, Ky. — The man behind a new veteran suicide prevention center in Northern Kentucky is using his experience to connect to other veterans and give them a sense of community.


Opening up is not always easy for military vets when they come back home, as 22 Until Valhalla President and founder Zach McGuffey explained.

“Veterans have an issue with isolation and trying to solve their own problems, whether it be mental or physical, on their own, by themselves,” he said. “I would say we helped each other in the military. We worked with each other in the military. The entire military was a team. You never did anything individually. So if you’re a veteran individually, come out here. Come to the team. Come to the family. We will help each other again.”

McGuffey knows it because he lived it. In 2011, he left the Marine Corps. After returning home, he started self-medicating.

“I attempted suicide about a year and a half after I got home,” he said. “Nine months after my attempted suicide, one of my best friends from the Marine Corps, that we deployed together in Iraq and Afghanistan, he committed suicide."

McGuffey said he spent a year in the mountains of North Carolina healing, learning carpentry, getting into fitness and meditating.

“And then I came back home and got into school and I said, 'you know, somebody needs to do something about this epidemic,'” McGuffey said.

In 2015, he established his nonprofit, 22 Until Valhalla. The 22 represents the 22 veterans McGuffey learned are lost to suicide every day.

He explained why many veterans struggle after leaving the military.

“You know, you go from hero to zero in a day once you sign and you get out of the military. And then you leave the family that you created, and you bonded with over all the trauma. And over all the good times and bad times you had within training and within the combat experience,” he said. “As soon as you leave them, your family, you leave your support system. You leave your identity. And now you have to recreate your identity, your support system, who you are, and who you depend on.”

Six years after starting 22 Until Valhalla, McGuffey was able to open a new center in Wilder this April. The goal is to help veterans rebuild their support system and reconnect with other veterans that are within their community.

Veterans and civilians can come to the center to work out, and learn things like jiujitsu and yoga.

U.S. Submarine veteran James Condict said the center has been a big help to him.

“I think the best thing to really put things in perspective is the continuous failure that you experience on the mat. And having to overcome that time and time and time again,” he said. “The unity, the camaraderie, the instant brotherhood, is incredibly similar to being back in the military where you’re all focused on one thing. And that focus is on each other getting better. It’s not necessarily on you getting better. But it’s on the improvement of the guy sitting next to you on the mat.”

More information can be found on the 22 Until Valhalla website.