LOUISVILLE, Ky. — How are Kentuckians coping with COVID-19? How are their kids doing in virtual school? And when do they think we’ll be done with all of this?

An exclusive Spectrum Networks/IPSOS Poll posed those questions, and many more, to 1,001 adults across the Commonwealth. The poll was conducted online from Oct. 7-15 and was released Wednesday.

The government response to COVID-19

Forty-one days passed between Gov. Andy Beshear’s inauguration and the first diagnosed case of COVID-19 in the U.S. Forty-six days later, coronavirus was in Kentucky.

Beshear has said he never expected a pandemic response to dominate his first year in office, but six months after he began that task Kentuckians believe he’s met the challenge. Thirty-seven percent of poll respondents said they strongly approve of Beshear’s handling of the pandemic, with another 28% saying they somewhat approve. That’s an overall approval of 65%.

Numbers for the state government as a whole are not as good, though there is still majority approval: 53% rate approve of Frankfort’s response and 41% disapprove it fair or poor.

Unlike the state and local governments, the federal government received poor marks for its handling of the pandemic. Only 34% of Kentuckians approve of the response from the Trump administration, while 60% disapprove. Republicans were the only group in which at least half gave the federal response a passing grade, with 55% approving. 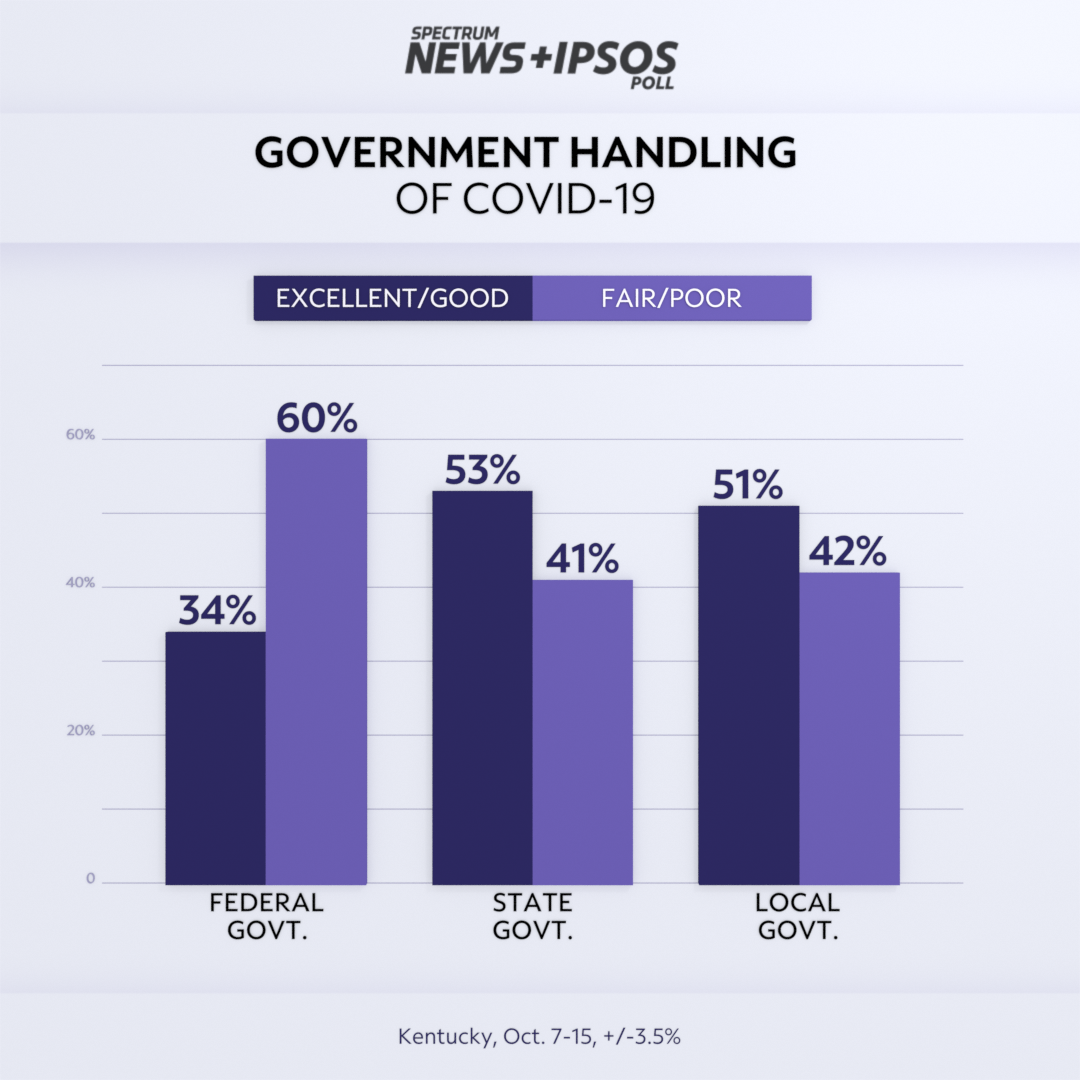 Learning in a time of COVID-19

In early August, Beshear advised schools to hold off on in-person instruction until Sept. 28. Some districts followed the recommendation and others didn’t. Now, halfway through the fall semester, many Kentucky students are attending class in masks, while others remain glued to their Chromebooks at home. 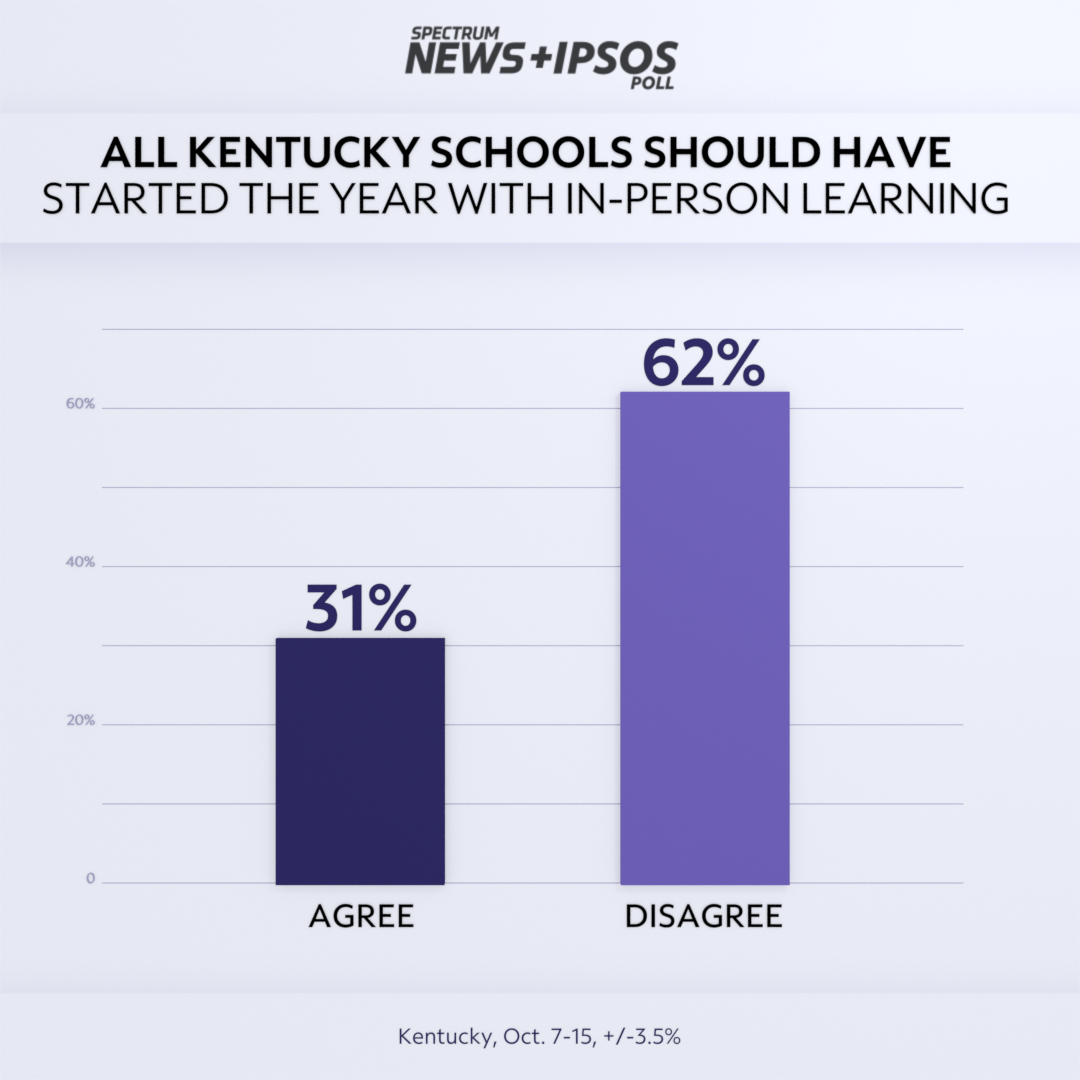 When it comes to the handling of the pandemic, 58% of adults believe their local school district is doing a good job, while 27% do not. Opinions in Louisville (56% approval) and Lexington (65% approval), where students are still learning from home, did not significantly differ from those in the rest of the state (58% approval) where some districts have gone back in-person.

When considering only answers from those who have a child in the house, approval for local school districts handling of the pandemic increases slightly at 60%, but so does disapproval at 30%.

Asked if they feel their child would be safe attending school in person, 51% of those with children in the house said they would not. Forty-four percent said they would feel safe. 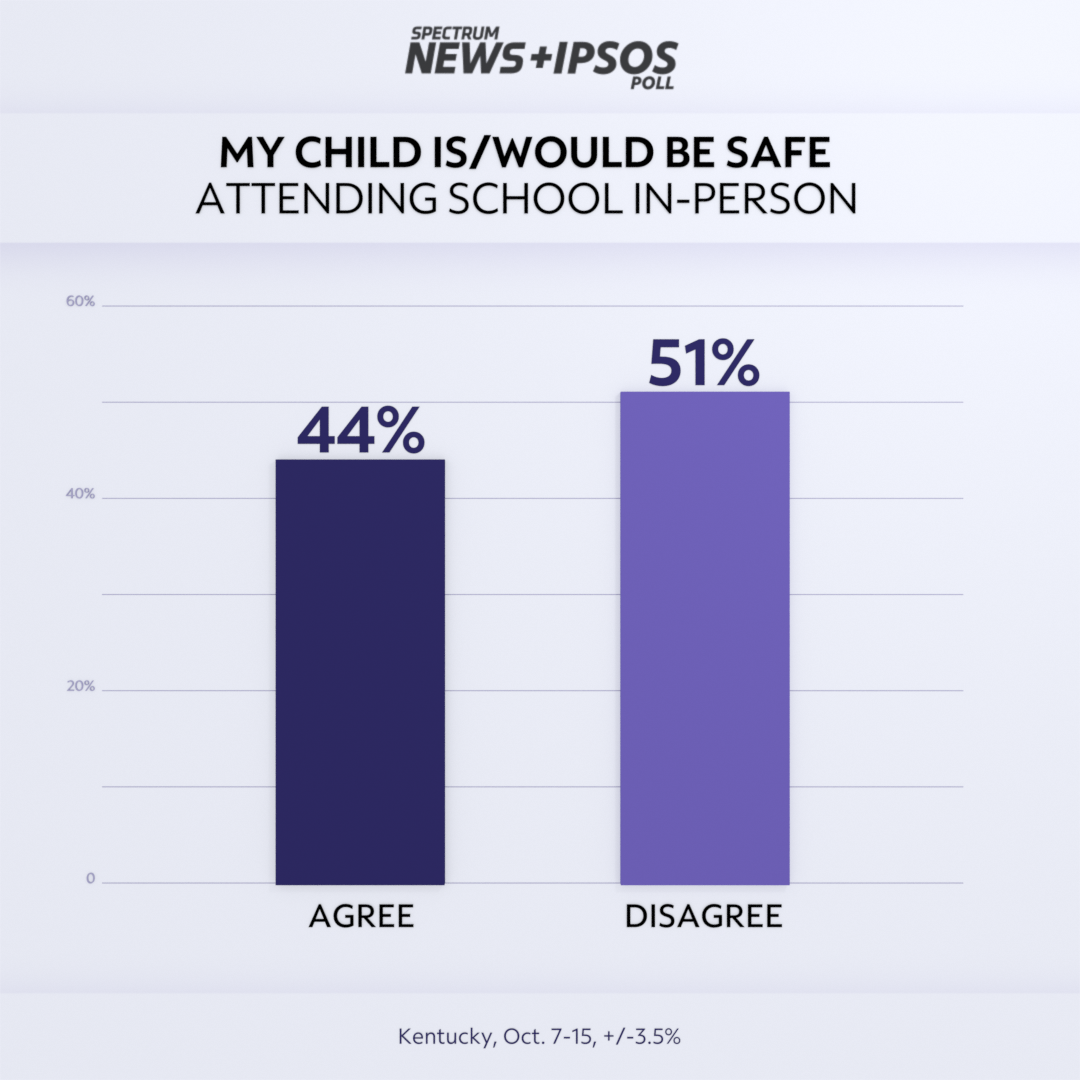 Adults were also asked how the children in their home are coping with the new-normal at schools. Three-quarters agreed that their children have “the necessary tools to learn in the current environment,” while 21% disagreed. Among those making less than $50,000 a year, 73% said their children had the necessary tools. A near-identical 72% of those making more than $100,000 agreed.

Additionally, adults with children at home were asked for their reaction to the statement “My child is falling behind in school because of COVID-19.” The responses were evenly split, with 47% saying they agree with the statement and 48% disagreeing. Working parents, 59% of whom agreed with the statement, were among those most concerned about their children’s progress in school. Meanwhile, only 35% of those who are out of work believe their children are falling behind. 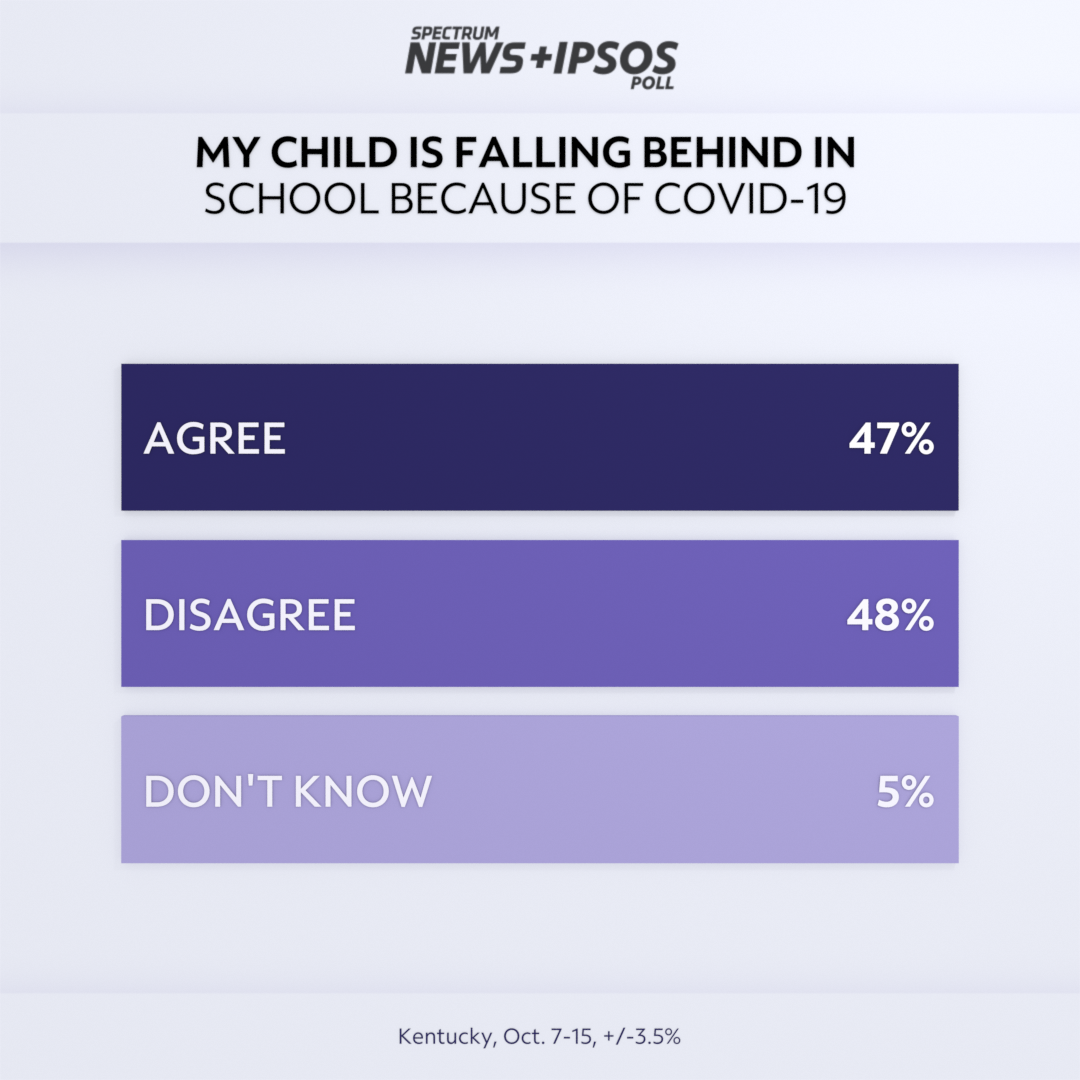 Overall, Kentuckians approve of Beshear's plan to reopen schools by a 53% to 37% margin. 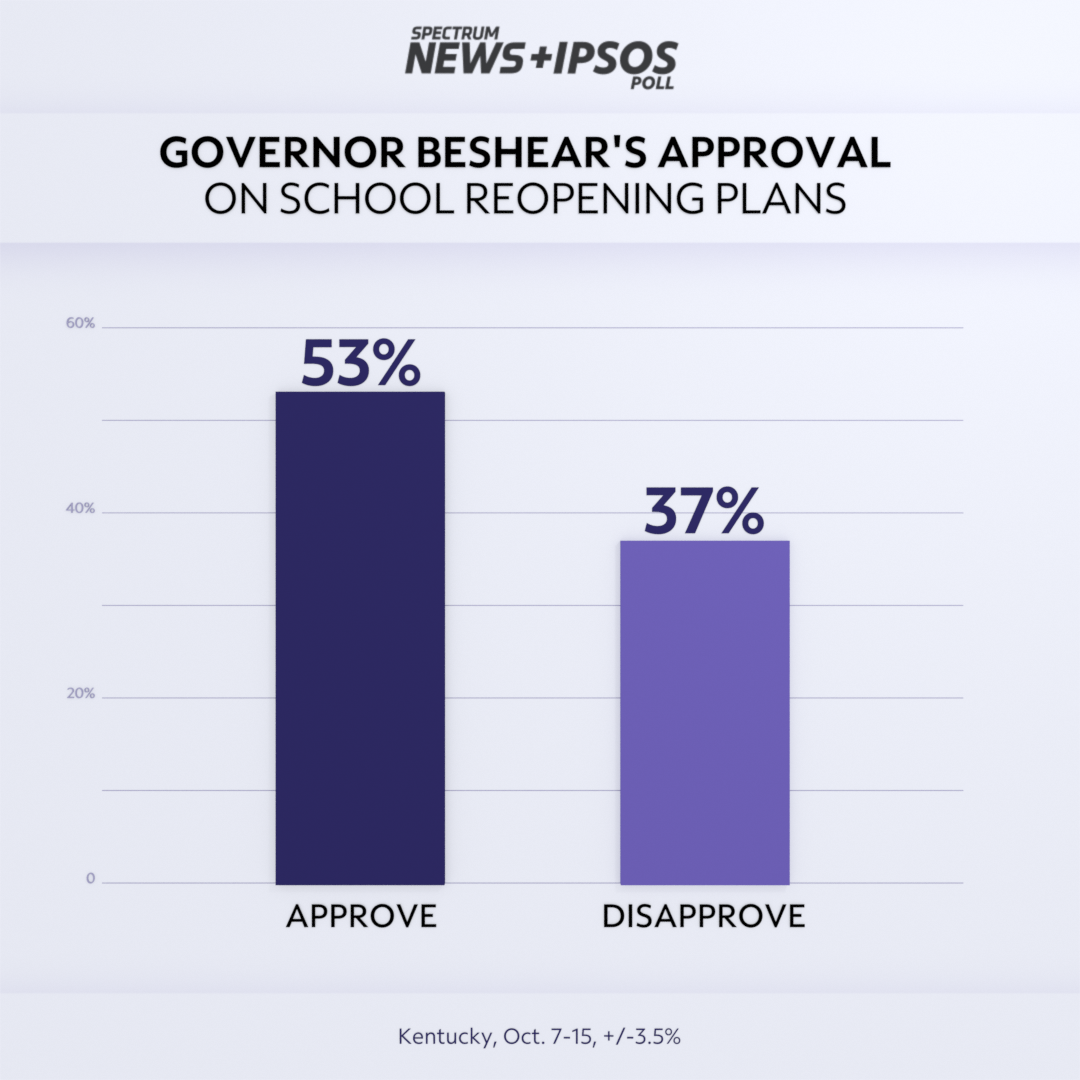 When will a COVID-19 vaccine be widely available? When will the economy bounce back from the pandemic-induced recession? When will daily death counts no longer be part of daily conversations? These are just some of the questions that go into figuring out when a sense of normalcy will return. We asked Kentuckians when they think that will happen. 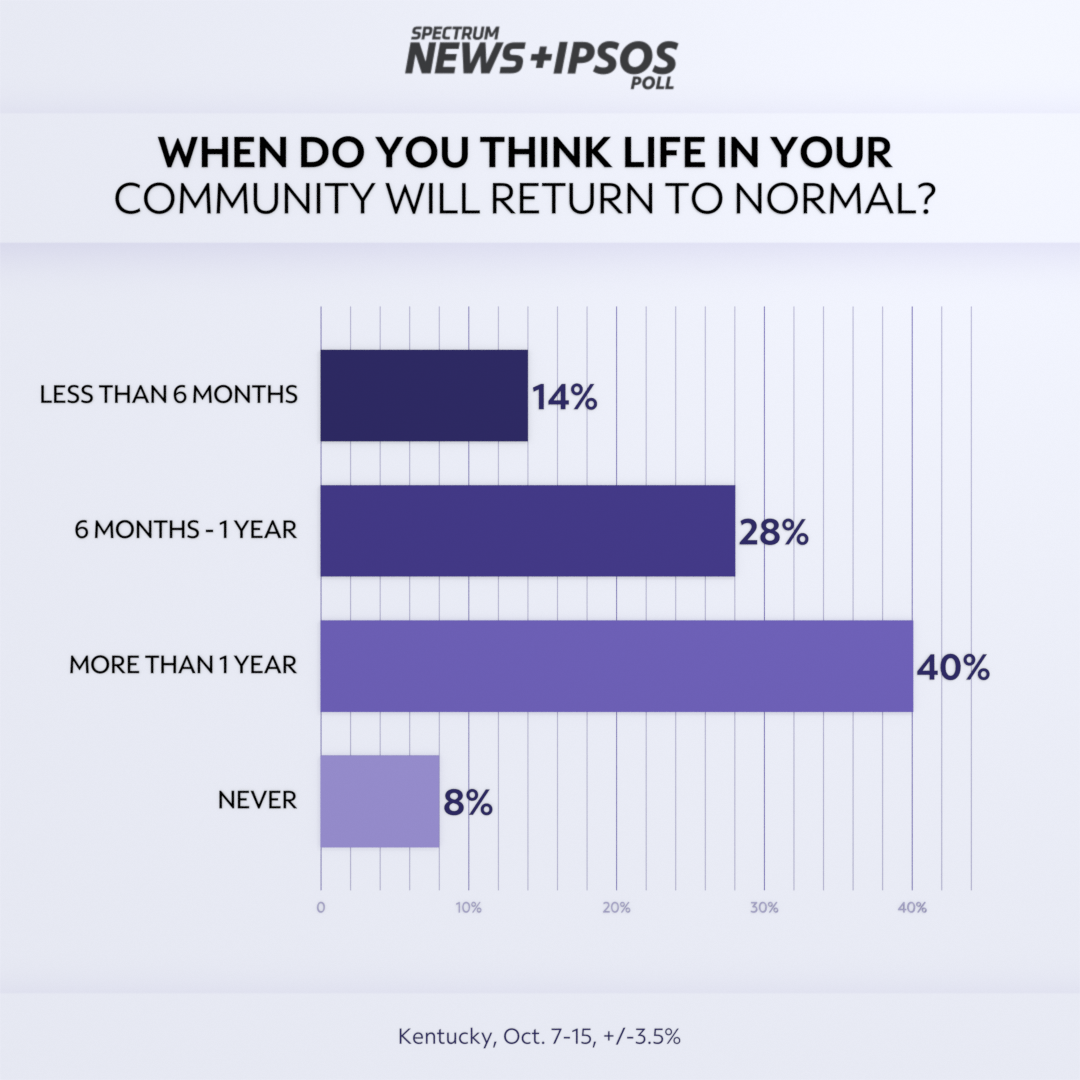 In early July, Gov. Beshear issued a mask mandate and he’s extended it three times since. Sixty percent of poll respondents seem to support this, agreeing when asked if there should be a state law mandating the public wearing of masks. Of course, mask wearing has been politicized at the national level and Kentucky is not immune to that. In our poll, 48% of Republicans disagreed with the mandate and 46% agreed. But Democrats overwhelmingly support the idea with 81% agreeing to the mandate and only 16% disagreeing. 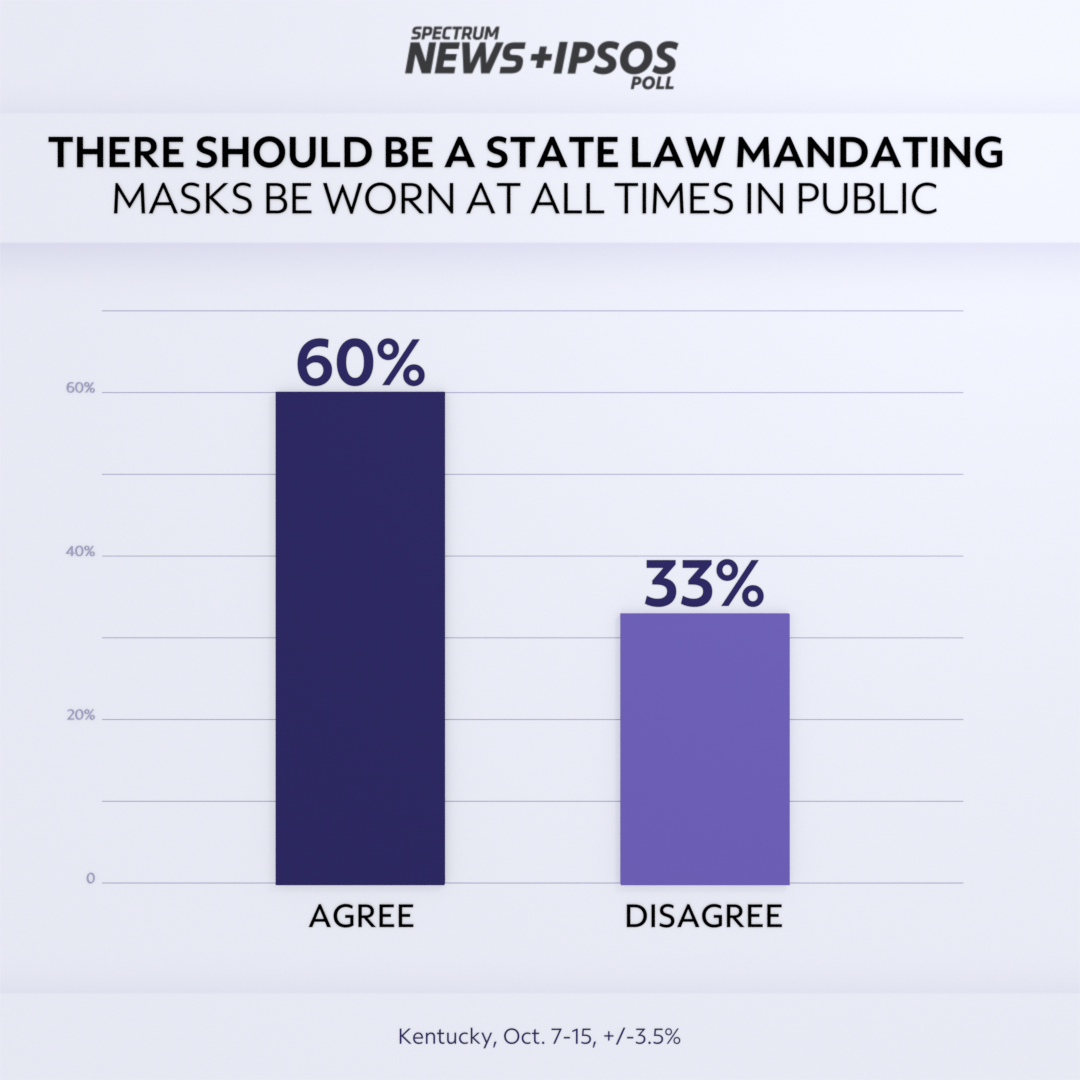 The response to a question about whether Beshear has “overstepped his authority with his executive orders related to COVID-19” returned similar results, with only 33% saying he went too far. 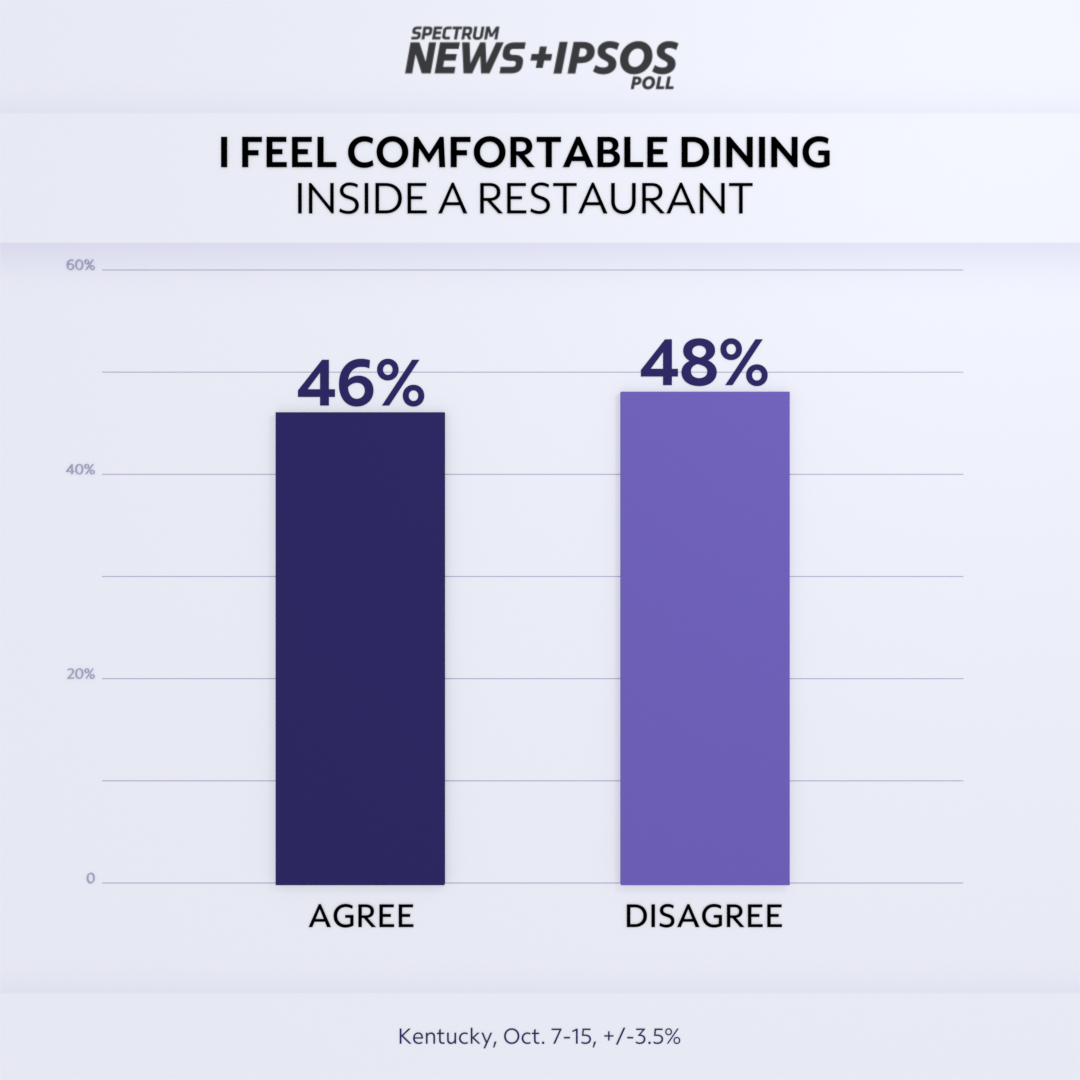 Asked about their willingness to take a “first generation” vaccine, only 36% of respondents were on board. Forty-five percent said they won’t take it and 20% said they don’t know.

Finally, Kentuckians were asked if the tumult of the pandemic and subsequent economic shutdown have made it hard for them to pay their bills. Forty-three percent said they have had trouble and 52% said they have not. Half of those making under $50,000 a year reported trouble with bills, as did 55% of those with a child in the home. The problem is particularly acute among those living in urban areas, 55% of whom cited problems with bills. The number falls to 44% in rural areas and 33% in the suburbs.

Six months into the pandemic, Kentucky’s COVID case count is approaching 90,000 and the number of deaths is likely to hit 1,500 in the coming weeks. But relative to other states, Kentucky has seen a smaller outbreak and smaller number of per capita deaths. Still, as our poll found, 9% of Kentuckians know someone who has died from COVID-19.

The poll reflected the racial disparity of infections too, with 19% of whites saying a relative has tested positive for COVID-19. The same is true for 27% of Blacks and 40% of Hispanics.