Homesteading: The Old Practice Makes a Comeback During Pandemic

LEXINGTON, Ky. – While the pandemic has forced people to alter their way of life, some people have changed by choice.


Homesteading, a lifestyle of self-sufficiency characterized by subsistence agriculture and home preservation of food, has increased significantly during the pandemic and not just with rural landowners. Homesteading, which may also involve the small-scale production of textiles, clothing, and craftwork for household use or sale, is being practiced, in many cases, in the middle of major cities.

Dr. Jason Strange, chair of the Peace and Social Justice Studies Department at Berea College and author of the book “Shelter from the Machine: Homesteaders in the Age of Capitalism” said he grew up around homesteading and has spent years researching it.

“Homesteading is a hard thing to define,” Strange said. “It's one of those things where there’s a whole range of folks that homestead. Some have a little backyard garden, and others built their own house and have a big garden and grow all their own food. There are people who have definitely engaged in homesteading even if they haven’t gone whole-hog into it. Some homesteaders would disagree; they think you have to really go for it. But the only definition I could come up with that made sense is one where it's just sort of degrees of engagement. That's what you actually see people doing. There’s a whole range of things.” 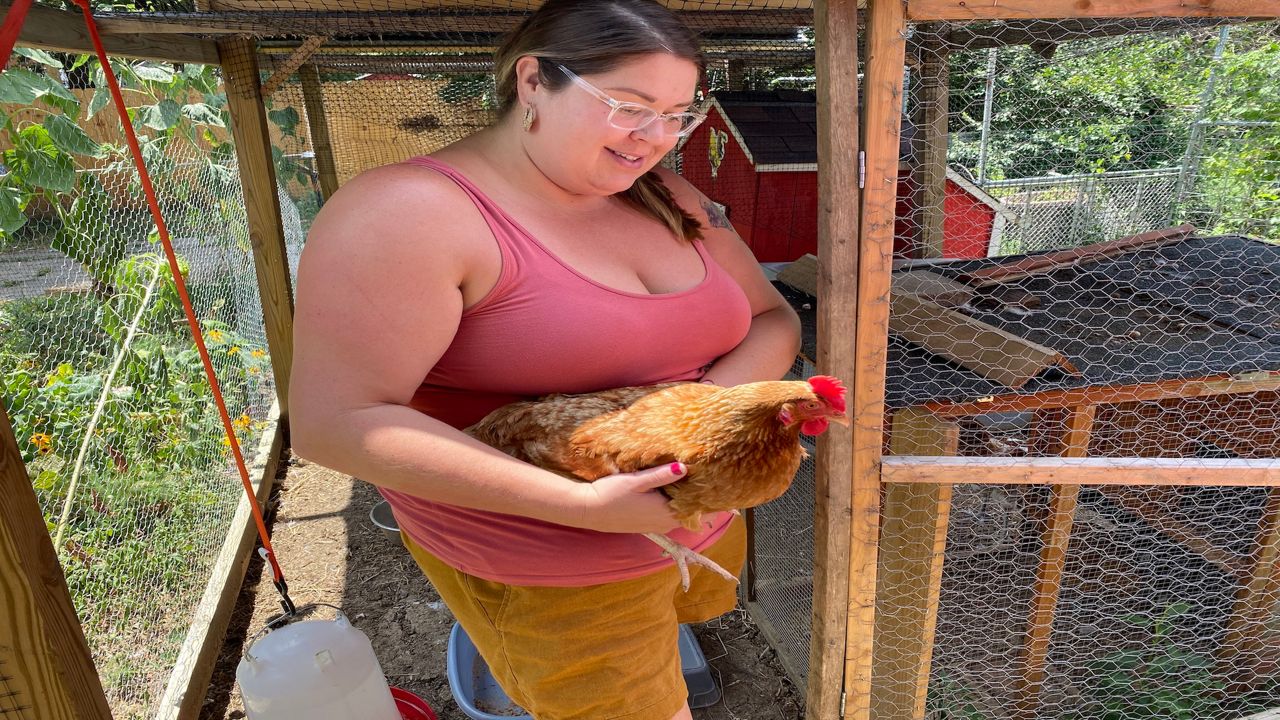 Leah Wedl holds "Big Sandy,' one of the chickens on her small homestead farm in Lexington. (Brandon Roberts/Spectrum News 1 KY)

Attorney Leah Wedl and her boyfriend, Jose Salas, live near downtown Lexington. The couple has dedicated most of their backyard to a garden, chickens and chicken coop, and rabbits. Wedl admitted she and Salas dabbled in homesteading before the pandemic, but have made it into a way of life since.

Wedl, a Wisconsin native, said she grew up on a farm, and Salas was born in Venezuela but raised in Lexington. They share a mutual interest in homesteading.

What Wedl and Salas have, in addition to 10-foot tall sunflowers, is a garden that yields cantaloupe, squash, cherry tomatoes, lettuce, kale, zucchini, and other fruits and vegetables. They have more than two dozen chickens and several rabbits, all of which are complementary to one another in their homesteading efforts.

“We come out in the morning and give them food and water and check and make sure they have food and water throughout the day,” Wedl said. “It’s not a huge time commitment. The coop took the most time, but that’s just an initial investment. The animals are pretty self-sufficient. They don’t really require a lot of attention.”

“We've taken processing classes to learn how to turn rabbits into meat,” Salas said. “(Wedl) was going to turn one into dinner, but she thought he had a really good personality and she didn’t want to eat him. He was going to be a meal, and if push came to shove, he could be. We know how to process chickens and rabbits, but we don't eat any of our own unless we absolutely have to.” 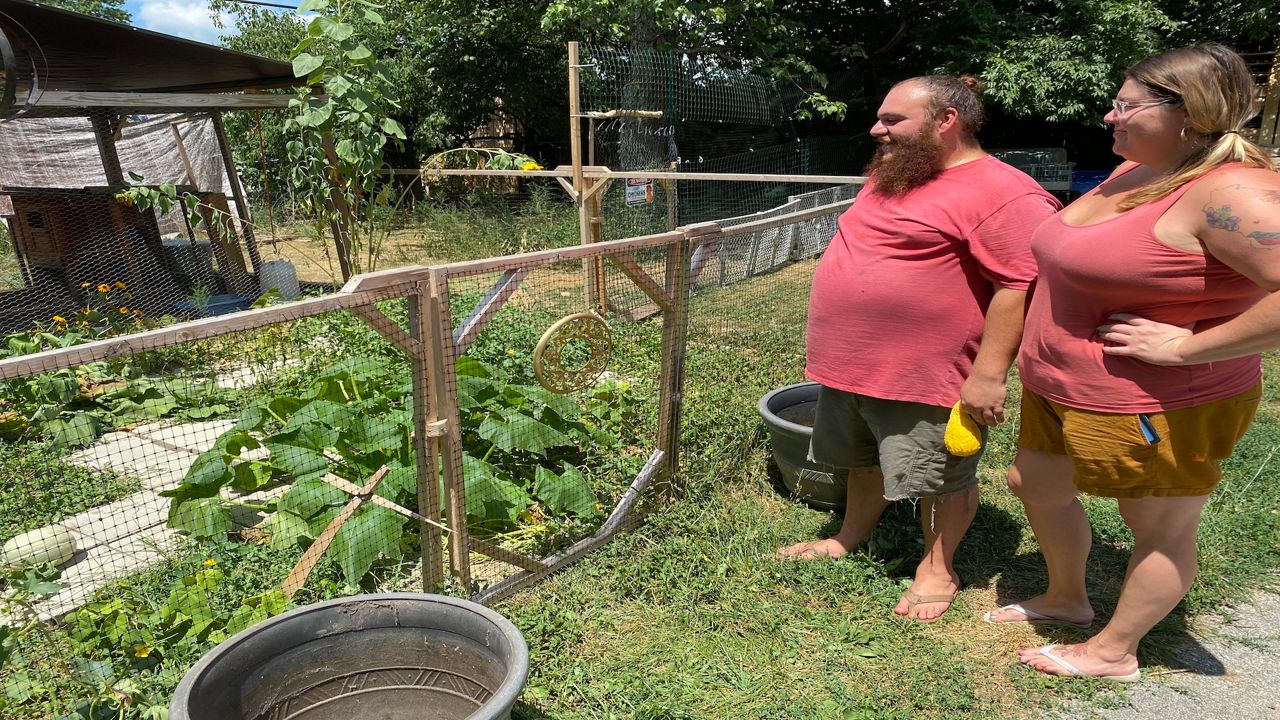 Jose Salas, left, and Leah Wedl admire the garden that is part of their small homestead farm in Lexington. (Brandon Roberts/Spectrum News 1 KY)

The chickens are there to produce eggs and the rabbits are for making compost. Rabbit manure is one of the only kinds of animal manures that causes no harm when put directly on plants.

“It just makes sense to do these things, and the pandemic made us realize that more than we already did,” Wedl said. “We collect rain and do everything we can do. We don't know what's going to happen, just cross your fingers that it doesn't get worse. But if it does, we have renewable sources of eggs and meat and protein and, we’re right in the middle of the city. We've got chickens we could eat if everything were to close down tomorrow. We'll be okay, not mention the fact this stuff taste so much better and is better for you than the store-bought stuff.”

After taking food from their garden, Wedl and Salas pickle, vacuum seal, and deep freeze. They have a freezer full of salsa, green beans, and corn.

“Pandemic aside, this is smart,” Salas said. “It's money-saving and it guarantees you'll have something to eat.”

People are buying chickens at a record pace, according to the Kentucky Poultry Federation. The Lawrenceburg Chicken Swap in Anderson County has been called one of the larger such markets east of the Mississippi River. Carl Stiwinter, of Frankfort, was a vendor at the Lawrenceburg Chicken Swap Saturday, Aug. 15, and said he started selling chickens when grocery stores placed limits on how many eggs people could buy.

“I had chickens and always had lots of eggs,” he said. “After the limit was placed on eggs, I couldn’t keep them. I sold out as soon as I got any. Instead of selling all my eggs, I thought I would just sell some chickens so people could have their own eggs.”

Strange said the United States has a history of showing “waves of interest” in homesteading. Whenever the mainstream economy falters, people will start homesteading.

“Seed catalog sales have gone through the roof,” he said. “So, this is just another iteration. When this pandemic started and economic problems started along with it, I immediately thought we’re going to have another wave of interest. It's an interesting thing people are gravitating toward. It's always kind of all around us. There's always people doing it. At times like this, you get these surges of interest and you get a wave of new people doing it, or especially in a place like Kentucky, you'll get people that used to do it, or grew up doing it or grew up around people doing it and then they'll turn to it. It's kind of like going back to something they did earlier in their lives.”

When the coronavirus pandemic began shutting down meat processing plants across the U.S. and Canada, concerns over a meat shortage surged and helped facilitate the growth in homesteading. The first impact noted was the increased demand for poultry products at grocery stores. People were staying home to avoid getting COVID-19 and to “flatten the curve.” This resulted in early panic-buying for many foods and non-food products, such as toilet paper and cleaning supplies. For the week of Mother’s Day this year, there was a 40.6 percent increase in retail meat sales, including poultry, as people shifted from eating out or at school, to eating at home. There was a similar trend for eggs as more consumers moved to breakfast at home. Statistics indicate there are currently more than 17 million new egg buyers in America.

“Although there was a dramatic increase in the demand for poultry, the supply chains were not set up to meet this demand,” said Dr. Jacquie Jacob, Poultry Extension Project Manager in the Department of Animal and Food Sciences at the University of Kentucky. “It is not easy to switch from supplying schools, restaurants, hospitals, and other institutions, to supplying retail outlets. There was a disjoint between the supply and the consumer. The shift in demand required changes in processing, shipping and warehousing.”

The second impact was the closing of processing plants as the employees became sick with COVID-19. For some plants, that meant they had to close for a few days for a total overhaul on labor flow.

Kentucky has historically been a hotbed for homesteading. Kentucky has 12.9 million acres of farmland and 75,100 farms, according to the USDA’s 2018 State Agriculture Overview. The average farm size in Kentucky is 172 acres. Because of Kentucky’s climate, soil, and the availability of livestock auctions and groups, the state has long been a sought-after place to grow crops and raise animals. Land in Kentucky is moderately priced, and there are a variety of groups promoting locally produced products throughout the state that will help farmers and homesteaders make money from their crops.

Homesteader, herbalist and blogger Amy Fewell said the pandemic has made it difficult to distinguish homesteaders from “temporary preppers” who “buy and stash” before depleting their stockpile without considering the next crisis.

“Homesteaders may be less likely to be affected by the virus – physically, mentally and with food storage,” Fewell said. “Homesteading isn’t just about gardening and livestock. It’s about being aware, but not consumed. It’s about living a lifestyle detached from a system. It’s about taking responsibility for your life and your family’s lives.”