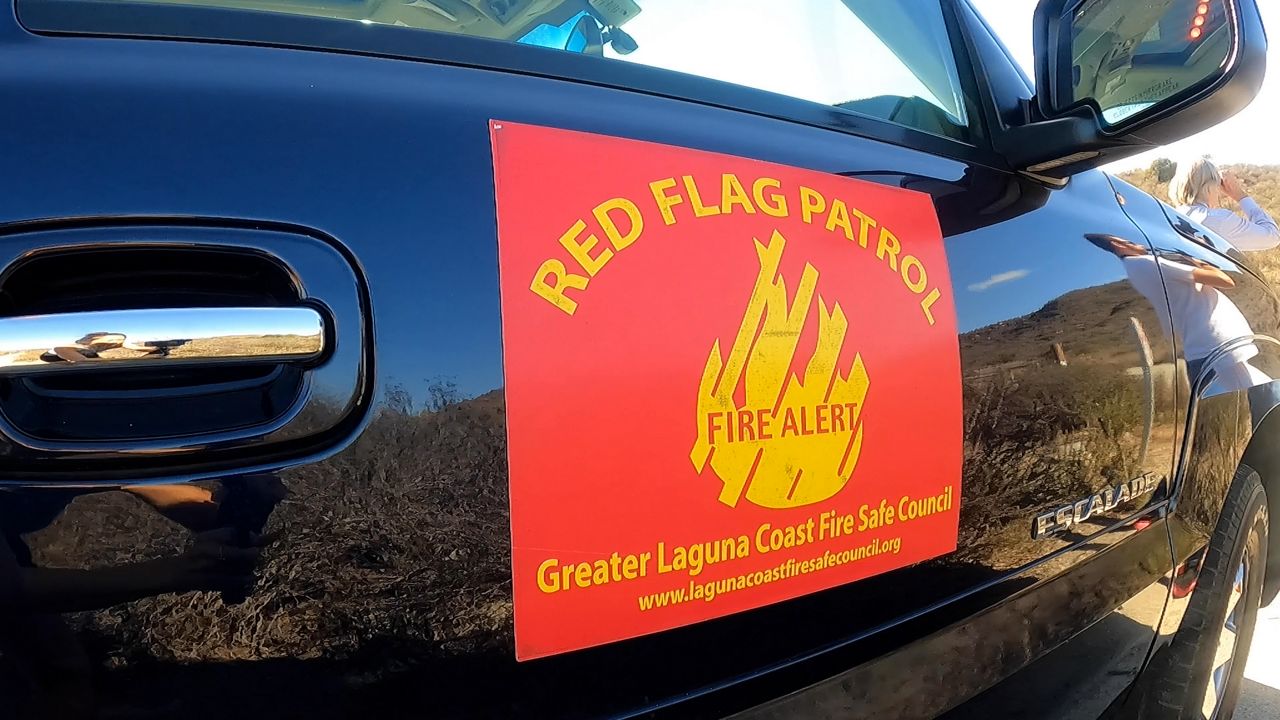 LAGUNA BEACH, Calif. — Santa Ana winds in Southern California are a signal of potential wildfires. And in Laguna Beach, it’s also an alert for a group of locals to be ready to go to help monitor things. It’s an all-volunteer group that calls itself the Red Flag Patrol.

Before any patrol, there’s a bit of preparation. David Horne secures large magnetic signs on his car that read “Red Flag Patrol” along with red window flags. He said these are all things that alert the public he’s on patrol.

“Just looking for things,” Horne said that makes him think, “Hmm, what’s going on there?”

For example, he said, a parked car somewhere that cars aren’t normally parked or someone maybe entering an area that is restricted will make him look twice.

Horne helped start the Greater Laguna Coast Fire Safe Council’s Red Flag Patrol two decades ago because he knows all too well what a wildfire can do.

His Christmas card in 1993 shows Horne and his wife standing in front of their burnt home with just one thing left standing.

“That’s our chimney,” he said.

Hundreds of homes in Laguna Beach were destroyed in the 1993 fire. The California Department of Forestry and Fire Protection, or Cal Fire for short, has identified areas of extreme wildfire risk throughout the state, and designated them as Very High Fire Hazard Severity Zones. Laguna Beach has 87% of the land area within that zone.

When the Laguna Beach Fire Department calls on the Red Flag Patrol, Horne is ready to step up.

Horne said it’s danger that he hopes to help prevent by monitoring the canyons in his neighborhood. During a patrol, Horne drives slowly on the 133 as he heads east toward the 73 freeway. He chuckles as his hazard lights flash as he drives under the speed limit.

“Probably upsetting the people behind me,” Horne said as he peaks at his rearview mirror. “Oh yeah, I got a nice parade behind me.”

The Red Flag Patrol may hold up traffic a bit, but Laguna Beach Fire Battalion Chief Andrew Hill said it’s a valuable resource when it’s hot, dry and windy in the area.

Hill said the red flag patrols is “a force multiplier.”

“They are an extra set of trained eyes that is actively driving around the city with the one idea seeking out potential problems that could start a fire,” he added.

Such as someone clearing brush when Santa Ana winds are whipping around. He said the patrols are not only a big help in potential wildfire prevention, but are also a visual reminder to locals, “that this might be a good time for them to check their disaster supplies, “ or he said, a reminder, “it might be a time for them to consider to be ready to evacuate.”

Horne and all the volunteers are called out a couple times a year to work a couple of hour shifts in scorching temperatures.

Horne said if he can help save just one home from being destroyed in a wildfire and help a family avoid the devastation he went through, then it’s all worthwhile.