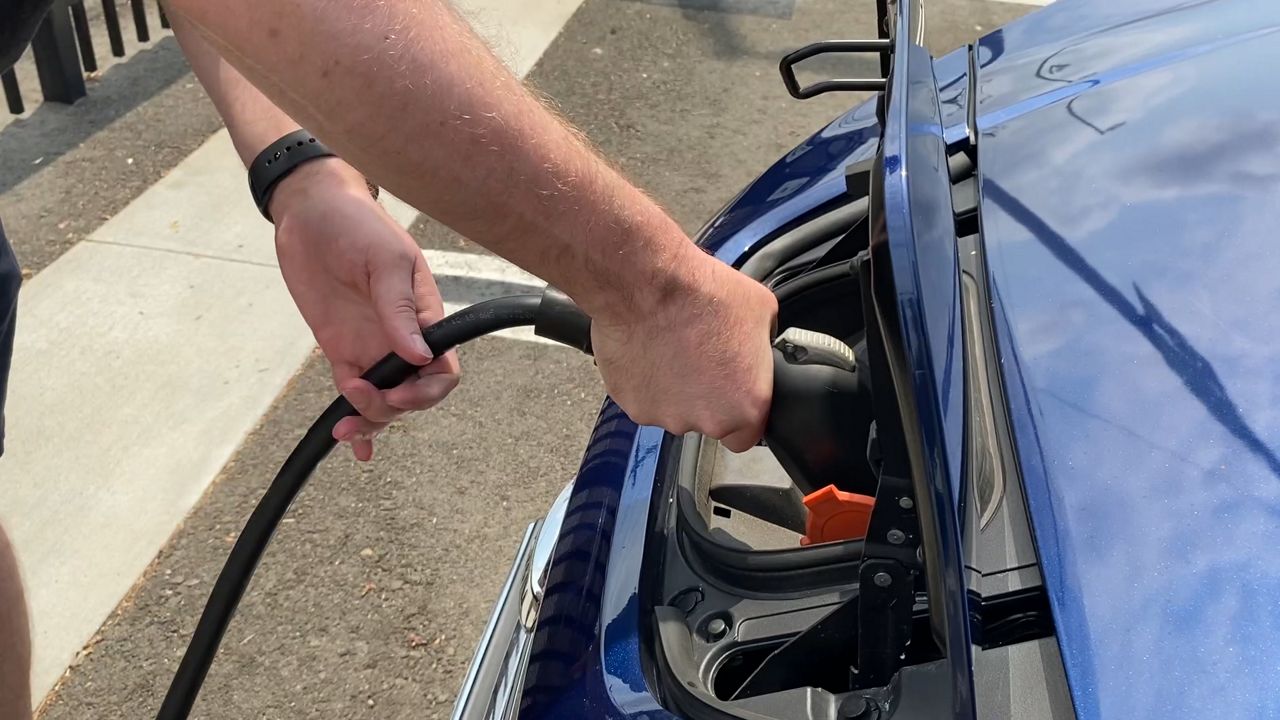 LOS ANGELES — Noah Barnes always keeps his eyes peeled for a charging station instead of looking for a gas station.

Luckily, Barnes has the help of an app.

"This PlugShare app, you can see all of the different charging stations around the city," he said while pointing to the app on his phone. "These are all ones that are filtered to work with my car."

Barnes has been driving an electric vehicle for over three years in Los Angeles. He's worked out a system for when and where to charge. But when the COVID-19 pandemic started, he had to rework his routine.

"I wasn't going to the office anymore," Barnes said. "I was working from home, so I wasn't able to charge at work, so I became more reliant on public charging."

As President Joe Biden pushes for EVs to make up 50% of all new car sales by 2030, more EV drivers like Barnes will be looking for places to charge, especially if they don't have a home charger. According to the U.S. Department of Energy, the U.S. has over 43,00 EV charging stations, and the Biden administration wants 500,000 more by 2030.

Levin said $7.5 billion for EV charging was included in the recent federal infrastructure bill, but it's a mere fraction of the total amount Biden asked for.

"It's $174 billion that covers this whole value chain, soup to nuts," Levin said. "A lot of it is batteries and other elements in the technology, so you need all that stuff."


Local cities prioritizing charging infrastructure will also help encourage EV adoption. The city of Burbank, for example, has over 70 public chargers for more than 2,200 EV drivers. Glenn Oyoung, PIO with Burbank Water and Power, said the city plans to have 500 EV chargers by the end of 2030.

"In Burbank, over half of our citizens, half of our community actually rents, and if you think about the renter experience trying to switch to EVs, even if they want to, it's really tough because they don't have access to charging where they live," Oyoung said.

Other cities are also ramping up efforts, including LA, which has over 11,000 commercial charging stations. The city plans to provide 15,000 charging stations by 2025 and 28,000 by 2030. Southern California Edison also recently announced plans to install 38,000 electric car chargers throughout its service area, covering most of LA County over the next five years.

For EV drivers like Barnes, he ended up moving to an apartment building with charging stations.

"I know that we are on a path to get us to an electric future where someday, we'll all be driving electric cars," he said. "And charging stations will be as common as gas stations."