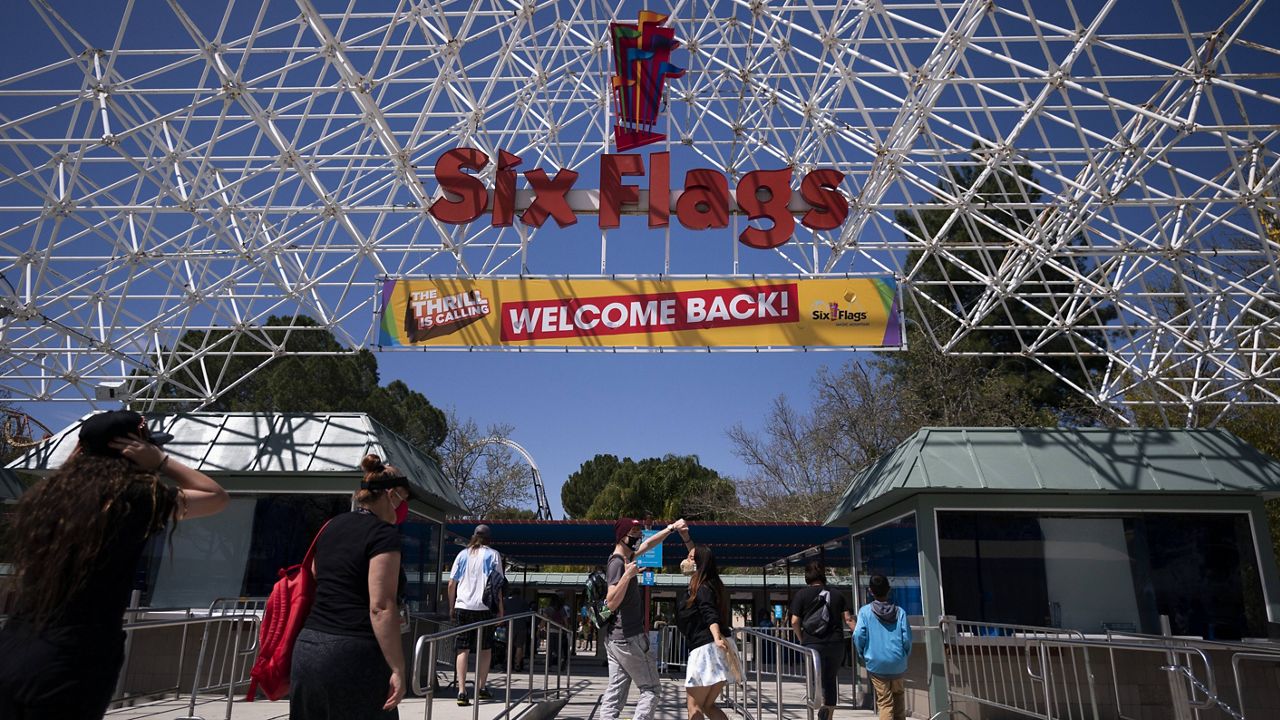 Two visitors jokingly dance as they walk underneath a "Welcome Back" sign at Six Flags Magic Mountain on its first day of reopening to members and pass holders in Valencia, Calif., Thursday, April 1, 2021. (AP Photo/Jae C. Hong)

Six Flags Magic Mountain Gets Back on Track

VALENCIA, Calif. – Six Flags Magic Mountain on Thursday welcomed back rollercoaster enthusiasts in what can be described as a step towards normalcy.


Six Flags opened its doors to members and season pass holders for the first two days, and will operate at reduced capacity and with new safety measures in place.

Among the first to enter the amusement park for the first time in over year was 16-year-old Harmony Hall.

When she learned Six Flags Magic Mountain was firing up its roller coasters again, Hall and her friends jumped online and scored tickets to the big reopening.

Even though they have been to the park more times than they care to admit, on this day, it was a completely new experience.

“It actually feels like life is becoming normal again,” Hall said. “I feel like I’m in a time machine right now.”

And what better way to get back to normal than screaming your lungs out on the world’s tallest vertical loop.

“I missed it so much I didn’t even realize how much I missed Six Flags,” Hall’s friend, Hailey Theobald said.

Among Six Flag Magic Mountain’s new features is an infrared touchless screening system that can take people’s temperatures without them needing to stop. Guests must also go through a live contactless security screening that does not just detect metal, but anything that resembles a weapon.

Hand sanitizing stations and social-distancing signs have been placed throughout the park. Visitors are also required to wear masks at all times.

For Hall and her friends that was a small price to pay.

“It’s just good and like a break to be back and do something from our normal life that we had before,” Lanna Chop, Hall’s other friend, said.