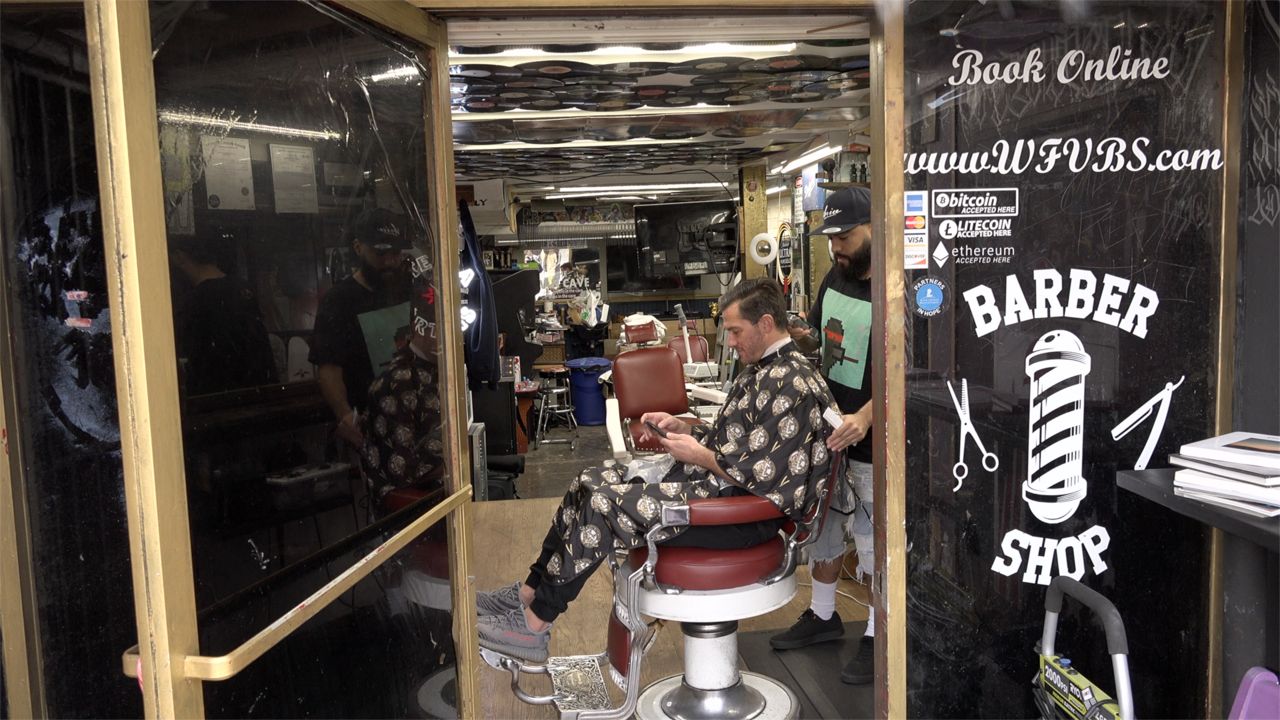 Cryptocurrency is the buzz at one Venice barbershop

LOS ANGELES — At Benjamin Veloz's barbershop, a shave and a haircut aren't two bits. At today's price, it's .0021 of a Bitcoin. Veloz owns "The World Famous Venice Barbershop" in the so-called "Silicon Beach" area of Los Angeles.

Veloz has been accepting cryptocurrency for services rendered since 2017 after a dot-com financier sat in one of his barber chairs and offered up a tip.

"I had a very, very intelligent tech guy, tell me that blockchain was the future," Veloz said as he cut a customer's hair in that same chair. Blockchain is the technology behind cryptocurrency.

Veloz immediately began trading in cryptocurrencies like Bitcoin. When he first accepted the currency, one Bitcoin was worth about $1,000. On the day Spectrum News visited his shop, Bitcoin's value was hovering at around $50,000.

Veloz has earned a lot of money trading in cryptocurrency or "crypto."

"I'm hoping to make a lot more," Veloz said. "I think we just scratched the surface."

In fact, Veloz said digital currency did a lot more than make him rich.

“Crypo saved my life, man” Veloz said. “I would not be here without it.”

During the COVID-19 shutdown, Veloz couldn't work remotely like other people in the workforce. He couldn't "Zoom" his customers and cut hair virtually.

"Bills were still due. Rent was still due," Veloz explained. But he was able to take some of the money he had invested into cryptocurrency and keep his business afloat.

Cryptocurrency dominated the news at the end of 2021, with big-name celebrities such as Matt Damon plugging digital currency, and LA's iconic Staples Center was rebranded as Crypto.com Arena.

Heading into 2022, Veloz has full faith and credit in cryptocurrency.

Robert Sheridan is most decidedly not "all in." He doesn't own Bitcoin or any of the other dozens of cryptocurrencies such as Ethereum, Litecoin or Dogecoin.

However, Sheridan, an administrator at the David Nazarian College of Business and Economics at California State University, Northridge, knows quite a bit about Bitcoin and digital currencies in general. He has worked in the financial markets his entire adult life and has studied the recent phenomenon surrounding cryptocurrency and its underpinning technology: blockchain.

One reason Sheridan will not invest in cryptocurrency is its volatility. And, despite his knowledge on the subject, he refuses to predict cryptocurrency's path going into 2022.

"I think anyone who says they have an idea of where Bitcoin or cryptocurrency is going," Sheridan said from his campus office, "they either don't know, or they are being disingenuous. I don't want to prognosticate, because, frankly, I think there's too much of that going on, and I think it's irresponsible."

But Sheridan will hang his hat on one thing: Cryptocurrency is here to stay.

"No, it's not going away," Sheridan said. "The genie is not going back into the bottle. The proof of concept is firmly established. The technology is proven."

That technology is blockchain, the distributed data that is shared among thousands of computers on the internet. In the case of cryptocurrency, no central authority—like a bank—controls it. And, Sheridan said that is why futurists should keep their eye on blockchain, not cryptocurrency, which is volatile at the moment.

In 2021, the digital currency was in the news for its wild swings in value and "FOMO"—people's "fear of missing out" if they did not invest in cryptocurrency.

"The first application of blockchain that has become popular is money," Sheridan said. "And what's more volatile than money?" But the blockchain technology underneath digital currency is very secure and sound, Sheridan said. Each transaction requires multiple authentications among many computers across the internet.

"That's the reason why blockchain is so secure," Sheridan explained, "and very tamper-proof."

He said it is also the reason why, in 2022, blockchain will allow financial companies to offer different products such as payment systems and "smart contracts."

"There are some really fundamental problems that can be solved with blockchain," Sheridan said. As an example, he said, companies will be able to trade carbon credits much more efficiently using this blockchain.

Dr. Lene Martin agrees. She runs Pepperdine University's Blockchain Department. Blockchain, she said, will allow financial institutions to decentralize their transactions. "De-fi," or decentralized financing, will pick up in 2022.

However, traditional banking companies are also starting to dabble into cryptocurrencies. And that, Dr. Martin said, will pull increase cryptocurrency's acceptance among a wider audience.

"I think as we see more institutional capital piling into cryptocurrencies," Dr. Martin said, "I think that masses will have more trust in it."

Martin also said that in 2022, there will be increased laws and regulations regarding cryptocurrencies, which, since they are not "minted" or sanctioned by any one government are inherently "lawless."

However, some scholars, Sheridan included, think governments will wrestle with this for some time.

"(Money) is very important part of their political system, their society," Sheridan said. "When you now have a currency that is outside of any national control, and, in fact, is global, and that is run by a network, that is problematic for any country."

But Martin said that this decentralized, anti-authoritarian aspect makes blockchain so revolutionary.

"People can actually begin to own their own identities, their own money and their own data," Martin said. "This is the age of autonomy."

And that autonomy includes another blockchain application that Martin said will ride high in 2022—NFT's, or non-fungible tokens. NFT's are data that are unique and owned by an individual.

And, back at the barbershop, Veloz is wearing an NFT. It's a crude image of a bird called "Thugbirdz."

According to Martin, using cryptocurrency in everyday transactions will be the exception, not the rule. Digital currency will be considered an investment going into 2022.

That's exactly what Veloz does.

"Oh, I hold it," Veloz said. "I never spend it. When someone pays me in crypto, I leave it in the wallet. Like a savings account. I don’t touch it."

CORRECTION: This story misidentified Robert Sheridan. His surname has been updated. (Dec. 29, 2021)