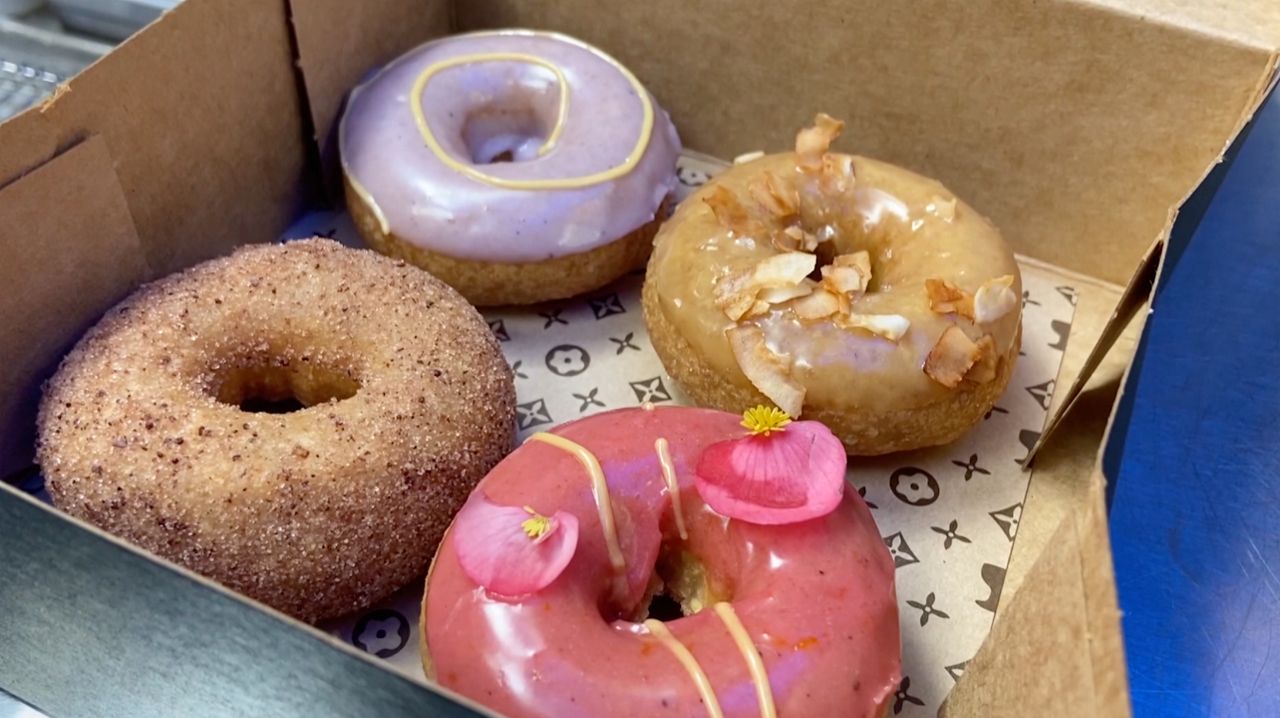 SANTA MONICA, Calif. — Los Angeles has a booming donut culture and one shop from Hawaii has fit right in.

If you look inside their Santa Monica food truck, you’ll find an assembly line of freshly formed, then fried, donuts that continues throughout the day. The pink batter turns golden brown before owner Nile Dreiling adds the finishing touches with whimsical and delicious toppings.

Dreiling feels the donuts are indeed the holy grail.

From the taro root batter to the edible flower decorations, every ingredient is meticulously curated and sourced, with flavors rotating weekly based on seasonality and inspiration with every donut made to order.

“We fry in organic coconut oil. We want you to feel good after eating the donut. We make our dough every 30 minutes,” said Dreiling.

The fruity, tropical options, such as the ube glaze with the passion fruit drizzle offering a bright tangy experience, are reminiscent of their origin in Hawaii.

Dreiling opened Holey Grail with his sister in 2018 out of a red burger truck on the northern shores of Kauai. They wanted to encapsulate all of Hawaii in a donut by using local ingredients, from the taro root batter to its toppings.

Dreiling’s sister was a private chef in Hawaii for years, while he had experience in the donut industry. After gaining a large following in Kauai, they decided to expand to LA.

“It is the most competitive donut market in the world,” said Dreiling. “We thought it would be the perfect place to challenge ourselves and go to toe-to-toe with what everyone is used to here.”

So far, so good — Holey Grail has a pop-up location in Culver City, a food truck in Santa Monica, a storefront opening just down the block on Main Street and another in Larchmont soon. It’s a fast growth they always dreamed of because Dreiling hopes to introduce more people to his unique donut.

“The texture is going to be light and fluffy, in between a cake and a raised donut,” he said. “In terms of flavor, the actual donut base is very low in sugar. We hardly add sugar to it. It is mostly savory, and the sweetness comes from the garnishes and toppings we choose.”


While garnishes and toppings rotate weekly, they will always have one made from single origin chocolate that is equivalent to a $20 chocolate bar, and the OG Glaze, which is a new spin on a Krispy Kreme style.

Dreiling knows the power of this sweet treat.

“Donuts are deeply rooted in American tradition and are the perfect canvas to show our creativity and exotic ingredients.”

Donut miss out on all the options at Holey Grail with multiple locations around the city. Find one closest to you by visiting their website.