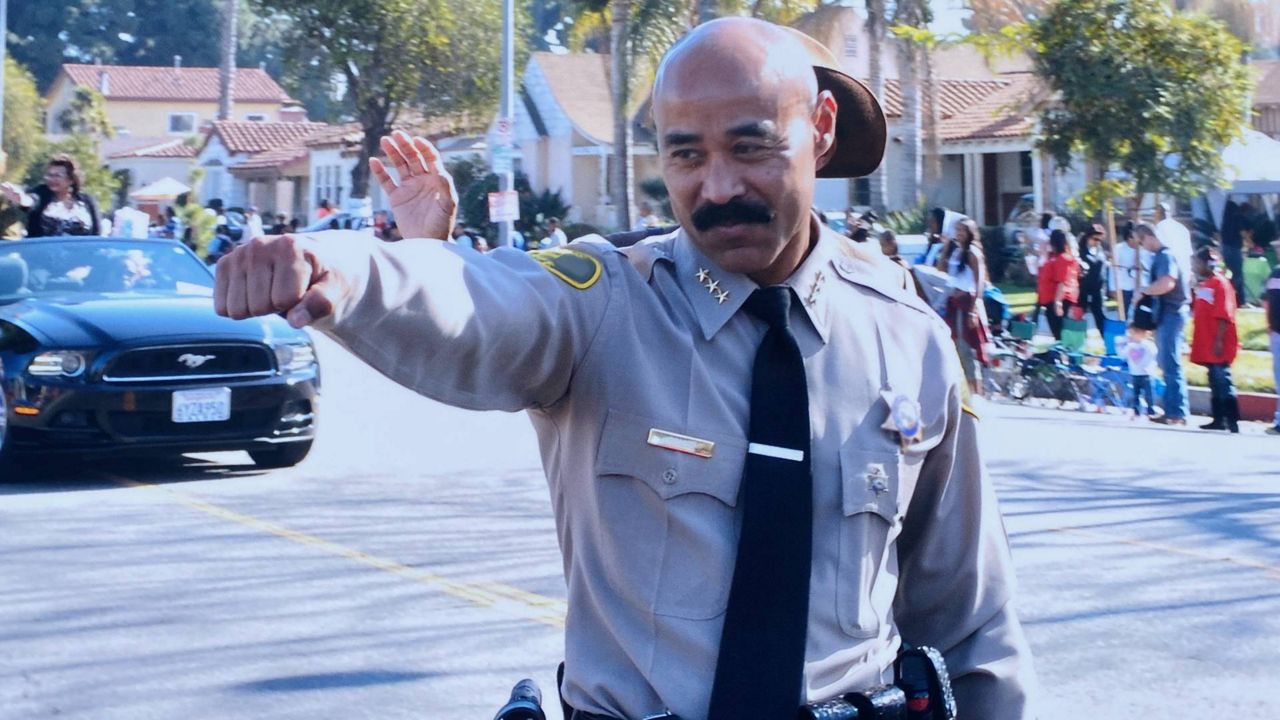 LOS ANGELES — If you were trying to build a resume to become Los Angeles County Sheriff, it would be hard to beat Cecil Rhambo’s credentials.

A 33-year department veteran who later became the city manager in his hometown of Compton, Rhambo is now chief of police at LAX. If elected in 2022, he would become LA County’s first Black sheriff.


"I’m biracial: half Korean and half Black," Rhambo said. "I’m from South Central, from Compton. I think it’s just the perfect time for me to share the experience and maturity I have."

Rhambo came out swinging in his first campaign video, calling current Sheriff Alex Villanueva the “Donald Trump of LA County” and comparing him to Rhambo’s former boss, Lee Baca, who is now in federal prison for obstruction of justice — along with his undersheriff, Paul Tanaka.

"I spoke truth to power and told Sheriff Baca, 'Don’t f--- with the feds,'" Rhambo says in the video.

Ten years after the FBI investigation into abuse by deputies inside local jails, the department if facing another potential federal investigation — this time into alleged tattooed, violent deputy gang members inside the Compton and East LA stations.

Congresswoman Maxine Waters has called for the Department of Justice to launch an investigation following allegations the deputy who shot and killed 18-year-old Andrés Guardado in 2020 was “chasing ink.”

"This is very similar to the incident I had to testify in," Rhambo said. "There was an FBI investigation, and as you know, I told the sheriff, 'Don’t mess around with the federal government. They’re not going cooperate with us. We’re the suspects.'"

Baca, Tanaka and 10 deputies were convicted in a conspiracy to obstruct FBI agents working with an informant to gather evidence of deputies abusing inmates inside county jails in 2011. Rhambo’s testimony at Baca’s trial was crucial to getting a conviction, according to investigative reporter Celeste Fremont, who covered the Baca and Tanaka trials for her nonprofit news site WitnessLA.

“The head juror said that Rhambo’s testimony was really, really persuasive,” Fremont said. “It suggested that the sheriff was informed that this was not a good idea and that his actions could potentially cause a problem from a legal perspective, and he decided to go ahead and do them anyway.”

Fremont, however, cautions that Rhambo’s long relationship with Paul Tanaka, an admitted, tattooed deputy gang member who allegedly encouraged deputies to push the legal boundaries, could be problematic. Tanaka testified under oath he has a tattoo associated with the Vikings, an alleged white-supremacist gang, on his ankle.

"The situation with Rhambo is, despite all of those impressive things he’s saying now, he’s got a lot of skeletons in his closet, and most of them, in one way or another, are named Paul Tanaka," Fremont said.

Tanaka is still in prison, though he received permission for supervised release to attend the funeral for Rhambo’s mother in 2015. Spectrum News 1 obtained the judge’s order allowing the release, which specified he was to have no contact with any prospective government witness, including Rhambo.

“I saw him there,” Rhambo said. “He didn’t really know my mom, but out of respect, there was a lot of elected officials there, and he was the mayor of Gardena at one time.”


When asked whether he himself was ever associated with a deputy gang or clique, Rhambo insisted he has nothing to hide, rolling down his socks to show he doesn’t have any ankle or leg tattoos. He added that, if elected, he would cooperate with any federal investigations and root out the department’s deputy gang problem through mandated reporting.

"It’s just like sexual harassment or some other issue where, you know, people don’t want to complain or tell on another person," he said. "If I mandate that you’ve got to tell me, or a supervisor hears of something like that, you’re a mandated reporter. That will go a long way to stop some of this nonsense."

Both Rhambo and Villanueva say they support proposed legislation that would ban the activity in all law enforcement agencies.

But first, Rhambo will have to convince the skeptics and eventually voters he’ll do more than just say the right thing when given the power — he’ll do it.