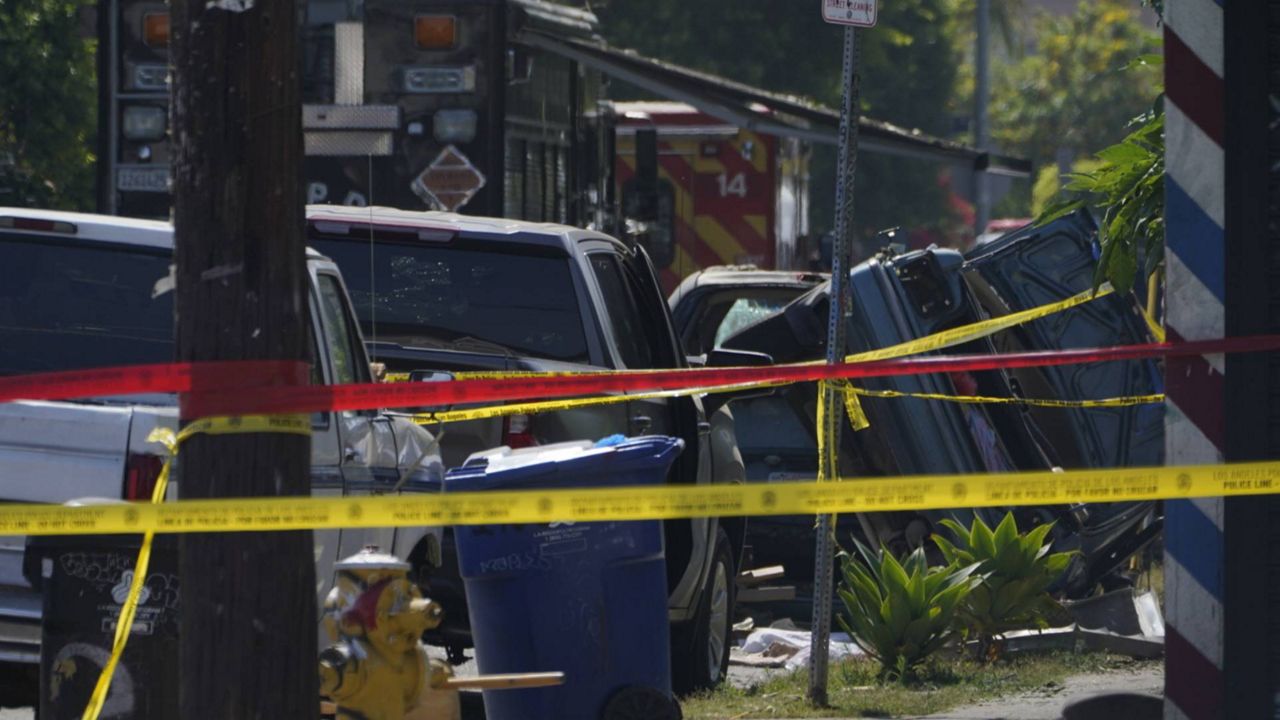 The remains of a flipped vehicle are seen July 1 after an armored LAPD tractor-trailer filled with illegal fireworks exploded the evening of June 30 in South LA. (AP Photo/Damian Dovarganes)

LOS ANGELES — On June 30, Los Angeles police performed what was supposed to be a contained detonation of a batch of illegal fireworks, but things went wrong.

The blast injured 17 people and damaged homes and cars. The 26-year-old who was in possession of the fireworks is out on bail and will be arraigned in August. But the 700 block of East 27th Street, where the detonation went wrong, is still caution-taped off nearly two weeks later.


There is now a collaborative effort at the site to get the displaced residents, like Natalie Quintanilla, the resources they need.

It was a difficult sight for Quintanilla to take in as she stepped carefully over broken tile up the stairs to the apartment she moved into just a year ago. She pointed to countless cracks on her walls and the glass covering her 1-year-old's room.

Quintanilla and her three kids were at the coin laundromat next door at the time of the explosion. The laundromat is steps away from where LAPD detonated the illegal fireworks, and Quintanilla explained how it felt like a nuclear bomb had gone off. She became emotional thinking about what could have happened to her son.

"I'm like, in a way, we might've been a little bit safer here, in my kid's room or in the closet or the restroom, but like, so much glass was on top of the stroller," she said.

Quintanilla and her family are now staying at a nearby motel, still uncertain of when they'll be able to move back into their home. She came back to the scene to try to get some answers and asked LA Police Department Capt. Alex Baez for guidance.

"Let me get your name and stuff, and I'm gonna find out for you," Baez said to Quintanilla when she asked him about the status of her apartment.

Baez noted that the response to the explosion is a multi-agency effort. The LAPD has been on-site 24 hours a day since the explosion to ensure no one is burglarizing the vacant homes, but they only handle the public safety component. Therefore, Baez made a call to LA City Councilman Curren Price's deputy chief of staff, James Westbrooks, to ask him about Quintanilla's apartment.

"At what point is she going to be allowed to move back in?" Baez asked Westbrooks over the phone. "She didn't see any yellow tag on her apartment; not sure if hers is livable yet."

Within just a few minutes, Westbrooks was on-site to meet with Quintanilla face-to-face. He said they're extending her motel stay through Friday and will work with her landlord and any others to survey the damage before determining if it's safe for them to move back in.


"For the last up to two weeks since this incident happened, me and my staff and counterparts have been out here every day assisting families, individuals on a case-by-case basis," Westbrooks said.

This includes delivering refrigerators, food and boarding up broken windows. Baez said his guys are on-site cleaning, helping residents connect to resources and documenting the damage in homes if and when they're invited upstairs. Some residents are still discovering new destruction.

"Oh my gosh," gasped one resident, who preferred to remain unnamed.

"We're just trying to play a role of trying to bring this community back together again," Baez said. "There's no other way. What happened here is awful, and we're really sorry that it took place. And at this point, all we can do is try to bring these folks back to a sense of normalcy and repopulate them in their homes and just get it right. We gotta get things right. That's what we're trying to do."

That is all Quintanilla is asking for as she is fed up with what she calls a blame game that has ensued. She said she just wants the city to focus on recovery.