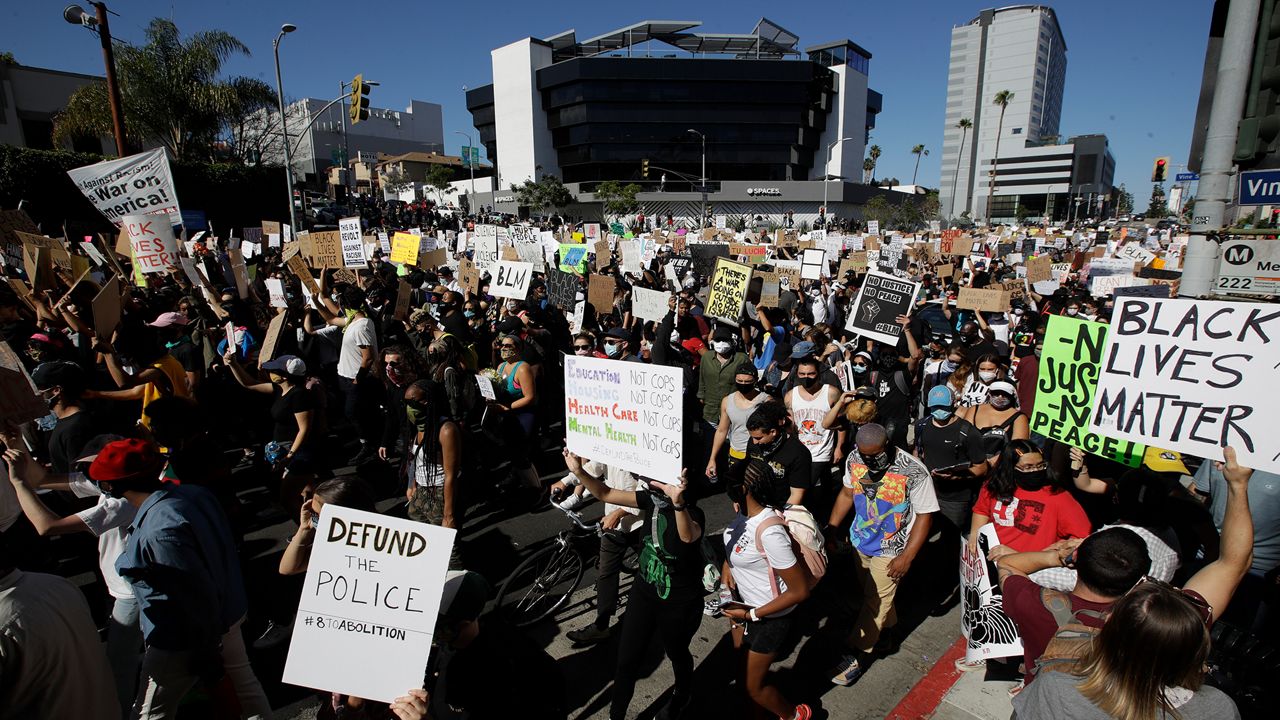 Demonstrators march Sunday in the Hollywood, during a protest over the death of George Floyd who died May 25 after he was restrained by Minneapolis police. (AP Photo/Marcio Jose Sanchez)

“Defund the Police”: What Does It Mean?

LOS ANGELES — The words “Defund The Police” are visible from 40,000 feet over Washington, D.C., and they are echoing on streets all over the nation.

Last week, Los Angeles Mayor Eric Garcetti put his city at the forefront of this conversation, with a proposal for a $100- to 150-million cut to the city’s $1.8 billion police budget, with those funds reallocated to various community services. New York City Mayor Bill DeBlasio called for something similar, and then the Minneapolis city hall took it further, announcing a veto-proof majority was committed to ending the current policing system. A council member later added that it was time to “rethink policing."

So what does it mean to rethink, or defund police? Well, there are lots of proposals. What Garcetti called for, is one of them.

Going further, this argument suggests that instead of sending police to every incident, we should instead invest in crisis and mental health counselors who could respond in other, nonviolent ways than the ones for which armed police are built.

So that's funding. But what do those who say “dismantle the police” really mean? Well, setting aside the extreme and literal version of those words, you’re going to hear a lot about Camden, New Jersey this week. That's because in 2013, that city actually dissolved its police department, after which it was reformed, as a sort of clean slate, with new protocols, even more cops, but with smaller salaries.

Overall, this was seen as a “trust-building measure” and it’s viewed as a success with falling crime rates and reports of better cop-community relations.

Of course there are strong arguments against anything resembling a defunding of the police. For one, people say it is the very communities that are asking for defunding that would suffer from a less robust police force, the so-called “high crime communities.” But that argument seems to acknowledge the assumption that systemic racism is an issue in law enforcement. The nation’s top cop, Attorney General William Barr, has a different take, saying that he doesn’t believe there is systemic racism in law enforcement.

In any event, any change to police funding is going to face resistance from powerful police unions. Recently, we saw tape of the Los Angeles Police Protective League.

The LAPD’s union Vice President Jerretta Sandoz told L.A. City Council Member Monica Rodriguez that the union would fight any attempt to defund the force. For more on their position, watch my interview above with LAPPL Director Jamie McBride.