A 'perfect day to right the wrong' at Bruce's Beach: After Newsom clears path, LA County works to return land

California has long been known as a place for new beginnings, a place where a person can take what they've learned from their past and transform themselves for their benefit and the benefit of their children.

Willa and Charles Bruce did just that in 1911, when they opened Bruce's Lodge, one of the few Black-friendly beach resorts in Southern California. But within a dozen years, their dream was dashed when local officials wrested their property through eminent domain to stamp out a growing Black beachfront community.

A century later, the Bruce family will have its ancestral land returned.

On Thursday, steps away from the Bruce family's ancestral land and side by side with a handful of Bruce family descendants, Gov. Gavin Newsom signed Senate Bill 796 into law. The bill authorizes Los Angeles County to return the property taken from the Bruces through racially motivated eminent domain.

"I'm mindful that people came here from all around the world for riches and new beginnings — so many from the South — only to discover…that those same laws, oppression, bigotry, hatred, rank racism was thriving, not just surviving, on the West Coast," Newsom said on Thursday. "We're here today to try to make up for that." 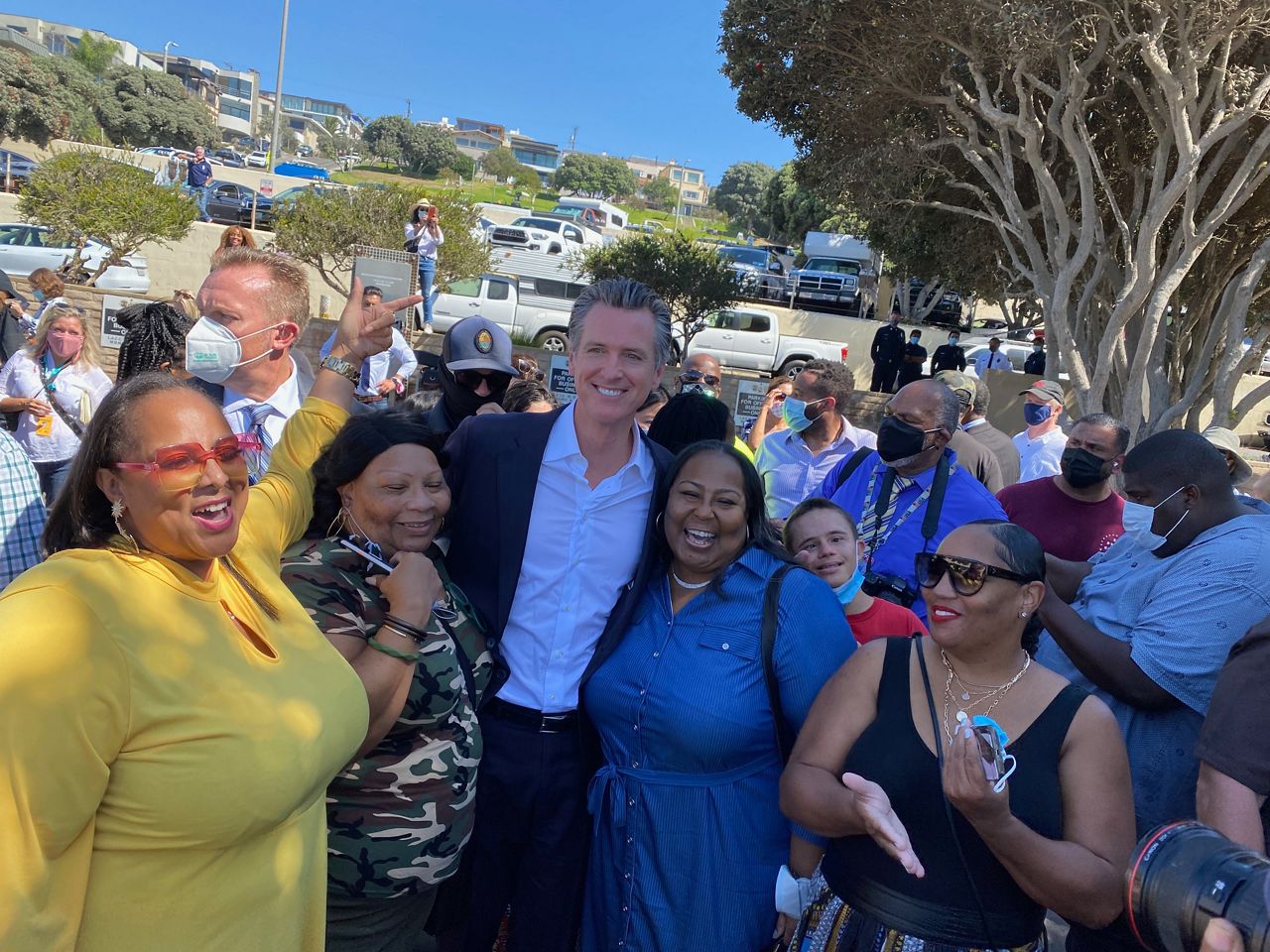 Although this bill opens the pathway for the land transfer, several steps still must be completed before the Bruce family can reclaim their family's land. LA County staff estimates that the final handoff will be completed by summer 2022.

SB 796, written by State Sen. Steven Bradford, was approved by the California Legislature in early September and won the unanimous support of the Los Angeles County Board of Supervisors. Supervisor Janice Hahn, who counts Manhattan Beach among the cities she represents, believes that the legislation could be a model for property restoration around the country.

"Now that LA County officially has the authority to transfer this property, my goal over the next several months will be to transfer this property in a way that not only works for the Bruce family, but is a model that other local governments can follow," Hahn said in a statement. "Returning Bruce's Beach can and should set a precedent for this nation and I know that all eyes will be on Los Angeles County as this work gets underway."

LA County acquired the land following a series of property deals that gave it control of the beachfront area. But state law, to this point, has restricted the transfer of public land to private entities. Currently, an LA County Lifeguard training center stands on the former Bruce property. 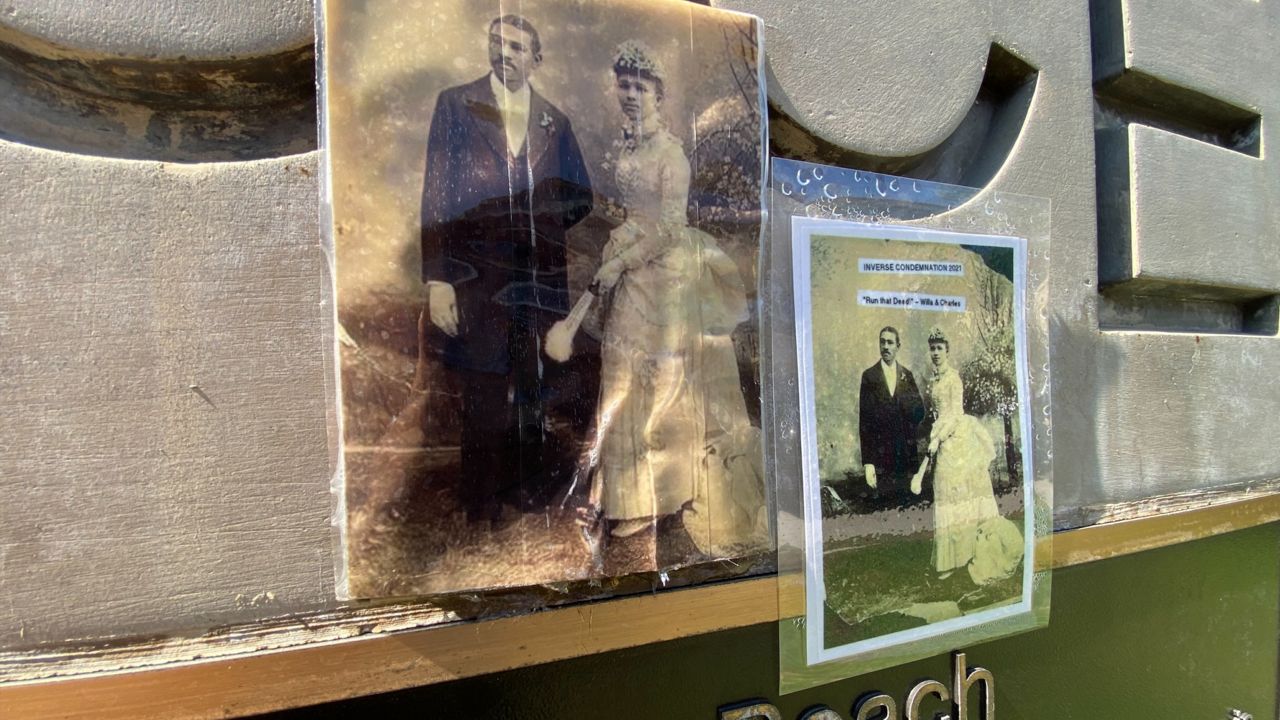 The Bruce family beach resort, known then as Bruce's Lodge, was opened in 1911. As one of the few Black-friendly beaches on the coast at the time, it became the centerpiece of a burgeoning Black community in the fledgling South Bay of Los Angeles. But visitors and residents were harassed, businesses were targeted with legislation, and properties were firebombed.

"Despite all the racial taunts, the KKK, the harassment, the burning of their facilities, the taunting and harassment of their guests, they survived and flourished for 12 years. And it was at that point that the City of Manhattan Beach took it upon themselves to say enough is enough. And they stole the property of Charles and Willa Bruce, through the guise of needing a park, through eminent domain," Bradford said, recounting the Bruce's story on Wednesday.

By 1924, a petition of residents led the city's Board of Trustees (the precursor to the modern city council) condemned two whole blocks of land, including the Bruce parcels, and the developed properties of four other Black families, and a handful of undeveloped properties controlled by white landowners. The land was ostensibly taken to be developed into a park, though decades later, one trustee acknowledged that the land seizure "was the meanest thing I ever did."

Each of the property owners — including the Bruces and their Black neighbors — were paid for their properties in accordance with the law. Each of those families eventually moved out of Manhattan Beach, as well, and the young Black enclave was quashed. As of the 2020 Census, Black residents make up 0.5% of the city's population.

Amid the racial reckoning of 2020, activists newly awakened to the park's history began to agitate; Justice for Bruce's Beach, founded by Manhattan Beach resident Kavon Ward, helped lead the charge. 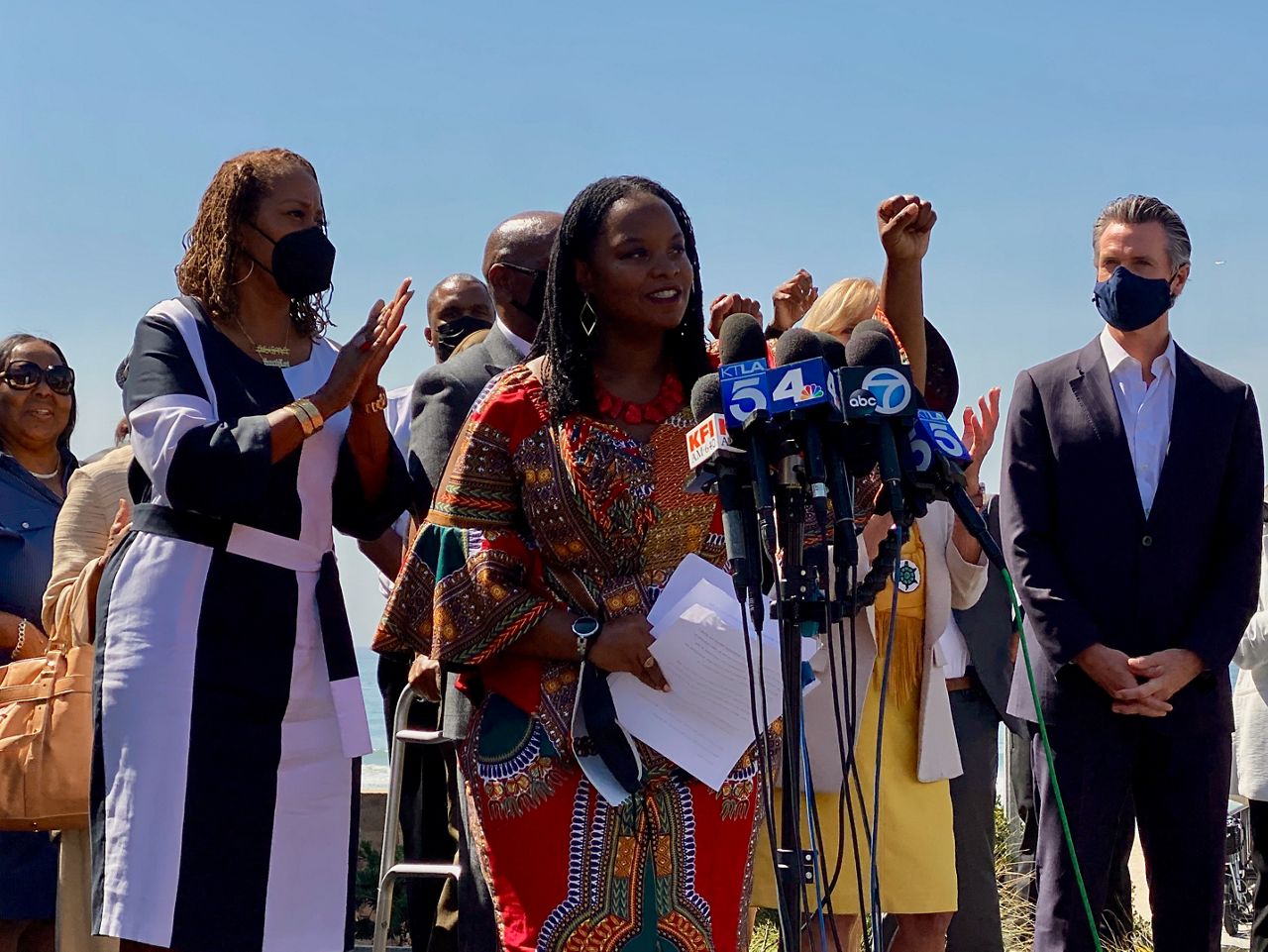 "On Juneteenth of last year, a reporter asked me what I wanted to see changed. Spirit moved me to say I wanted policy change that would deed the land back to the Bruce family," Ward said in a fiery speech before the bill signing. "Now we stand here a year later, alongside the governor, witnessing it manifest right before us."

When asked by Spectrum News if this is a victory, Ward said it was — but not total victory.

"This is one of the victories. This is the land restoration victory, but we still have to focus on getting the family restitution. The city of Manhattan Beach still needs to be accountable for what they did," Ward told Spectrum News.

The city of Manhattan Beach has condemned the city's past racist act but stopped short of issuing a formal, full-throated apology. It is unclear if the city will offer the other families whose land was taken via eminent domain restitution. Manhattan Beach has taken steps to update the monument plaque at Bruce's Beach Park, and in June adopted a history report on the site.

This is not the final step in the process. Hahn has announced that she will introduce a motion directing Los Angeles County to prepare to accept the amended deed from the state and pursue a process to identify the legal heirs of Willa and Charles Bruce.

Ideally, that should be a straightforward process — a representative for Hahn's office said that it appears that two living grandsons of Willa and Charles are the couple's direct, lineal descendants — but the process will stand to vet any other claims to the inheritance. The county will then enter into official discussions with the heirs to determine what the land transfer will look like and consist of; that will likely include discussions as to future uses of the land and if LA County will lease the property from the Bruces for continued use of the Lifeguard station. Finally, the Board of Supervisors must approve the final transfer of the land.

"We're doing this carefully. First of all, we want to set a precedent for the rest of the nation. We're going to do this right and we're not going to rush it," said Hahn staffer Kyla Coates. "We don't want to just transfer it to them in a way that they can't afford property taxes, that they can't afford income tax, and that they might be harmed by the transfer…in the discussions with them, we need to make sure that we're doing it in a way that's beneficial to them, because that's the whole purpose of returning the stolen property."

"We're elated. We're happy that this day is here, and even trying to get to this day, you ran into problems. I just wish our ancestors were here to see this, and to be able to celebrate, and to know that what they did did not go in vain," Patricia Bruce said. "It's a gorgeous day, a perfect day, to right the wrong."