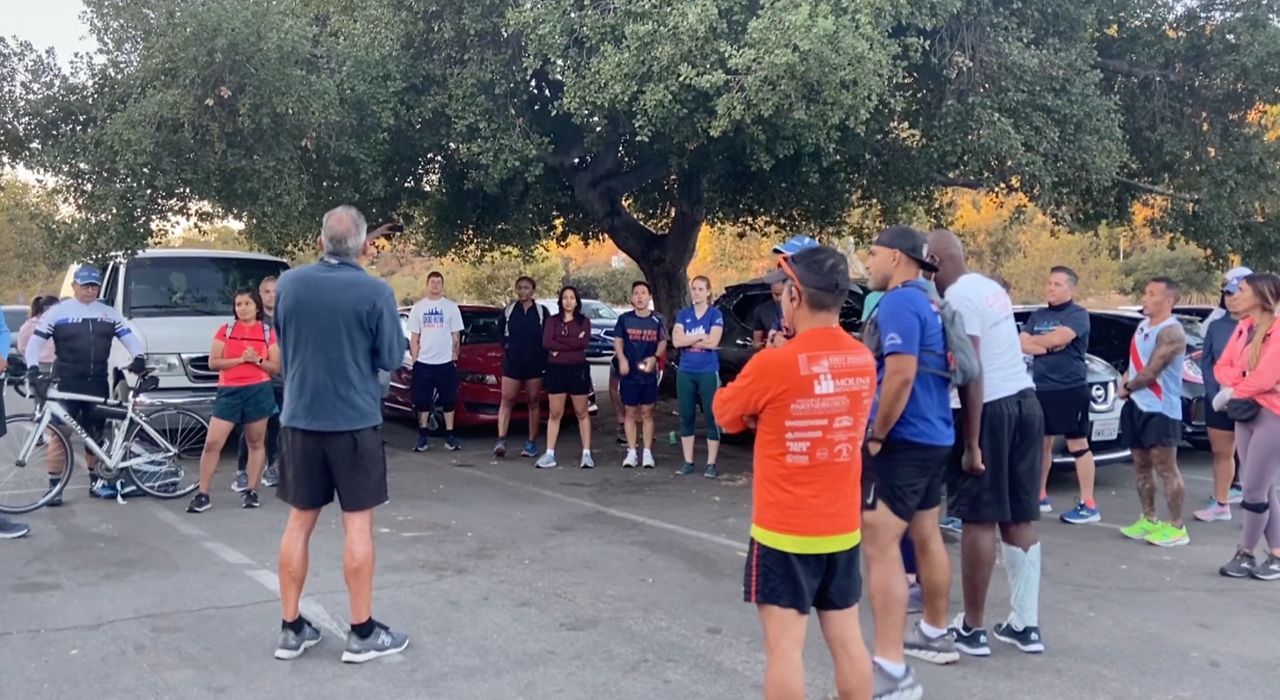 LOS ANGELES — This weekend, triathletes from around the world will come to Los Angeles to participate in the Herbalife24 Triathlon.

The Skid Row Running Club will be joining to swim, bike and run from one side of the city to the other. The club is more than just a way to exercise. It helps those who are struggling with homelessness or addiction get back on their feet.

Running is a free activity you can do anytime, anywhere. All you need is a good pair of sneakers, even though Mario Ocampo may need to swap his out.

"I gotta buy some new shoes too," he said with a laugh.

Ocampo is preparing to run almost 20 miles around the Rose Bowl to practice for the upcoming Herbalife24 Triathlon with the Skid Row Running Club. He joined the group during a program at the Midnight Mission five years ago after serving 18 years in prison. He was caught up in addiction and selling drugs but was determined to turn his life around.

"It was life changing for me," he said. "I have gotten to meet some extraordinary people who are successful, which I am striving to become."

After spending time with his fellow Skid Row runners, Ocampo got sober, went to college to study film and is now a grip on movie sets while writing scripts of his own. He said he owes it all to not just running but to those he surrounded himself with.

"I never had someone who was a good influence in my life," he said.

Ocampo found that mentor in LA Superior Court Judge Craig Mitchell — or just "Judge," as everyone calls him — who was a guiding force in Ocampo's recovery. He created the Skid Row Running club 10 years ago when a man he sentenced to prison showed him how the Midnight Mission helped turn his life around. Mitchell wanted to do his part, so he created the club knowing how vital running was to his own mental health.


Now, two days a week starting on Skid Row, and one day here at the Rose Bowl, 30 to 40 people of all backgrounds and skillsets — from those battling addiction and homelessness to police officers — get together to run for exercise or train for marathons.

"It has changed attitudes. People who were incarcerated for many years are now seeing law enforcement in a different light. Conversely, law enforcement is realizing if someone can get in recovery and overcome addiction, they are wonderful people," Mitchell said.

Ocampo is a prime example of the club's benefits. Ocampo said life is like running a marathon, and if you keep pushing yourself and stay motivated, you will succeed.

"There is a way out. I'm living proof you can do it if you wanted to," he said.

The Skid Row Running Club is open to all. The group meets at 6 a.m. every Monday and Thursday on Skid Row and at 8 a.m. every Saturday at the Rose Bowl. For more information, head to the club's website.