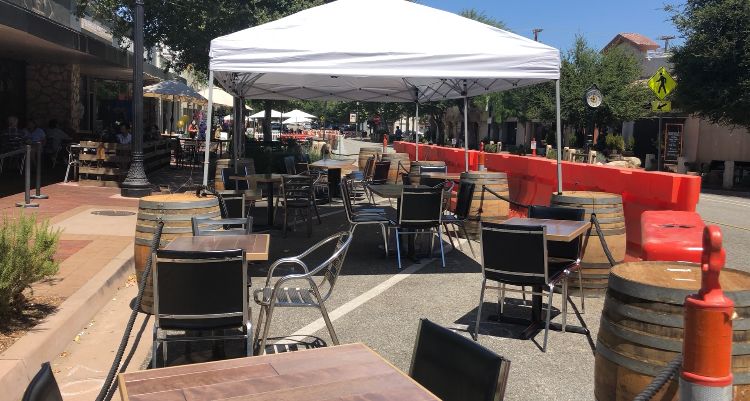 SANTA CLARITA VALLEY, Calif. – At Smokehouse on Main in downtown Newhall, the brisket is smoked for more than 12 hours. It is one of the reasons customers like Roger Pida and his wife, Rosie, like to visit.


Visiting local restaurants is an activity the couple placed on hold when the pandemic hit, but when they learned the City of Santa Clarita began allowing the closure of a portion of Main Street to allow restaurants to expand outside dining, the couple began dining at their favorite spots again.

“When I saw they were blocking it off I told my wife Rosie, we’re going to come down and give it a try,” said Pida.

Santa Clarita is closing a portion of Main in front of restaurants like the Smokehouse on Main on weekends. During the week and on weekends, restaurants are also allowed to use the parking in front of their businesses to expand seating.

“It works. I feel very much safer. They enforce the distance rules. It’s more personal," said Pida. "We like it here. We feel good, we feel safe.”

For Cherie McGraham, who owns Smokehouse on Main, the change made all the difference.

“I was just literally one payroll away from having to close my doors before the city allowed us to go into the street, which has been golden,” said McGraham.

The timing of the City of Santa Clarita allowing the closure of Main Street and the parking spaces was key due to the recent ban on indoor dining.

It allowed McGraham to increase her outside dining capacity from 10 to 50 guests, but it also allows customers like the Pidas to feel safe.

“It’s common sense, we want it to stop being spread so we have to do our part,” said Pida.