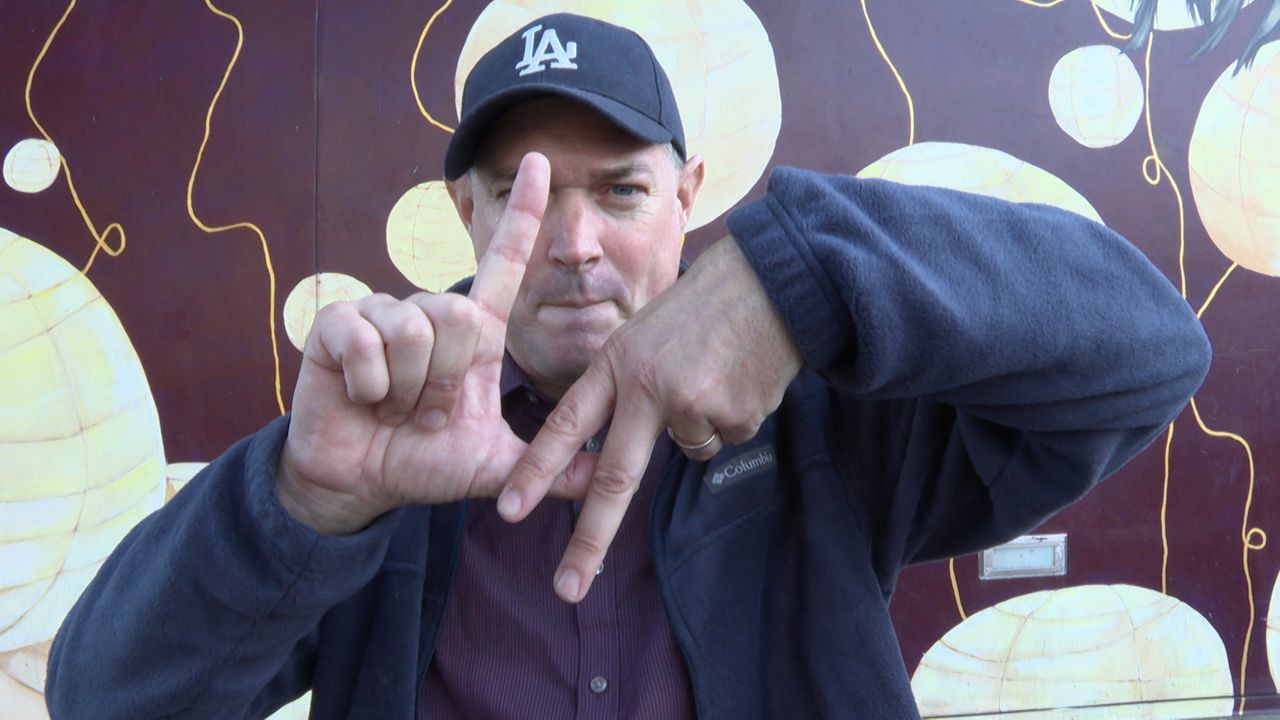 Here’s a quick little poem for you,” starts Mike Sonksen.

“Build the bridge. Lay down the bricks. Fill in the ridges. Stack the sticks. Feed the fire. Consider the cost. Take it up higher. The city is ours. L.A!”

Sonksen, who is better known as "Mike the Poet," is giving a group of students visiting from El Salvador a tour of City Hall. He usually has five or six stops planned during his two-hour walking tour and it always starts here.

“The eagle and the serpent is for Mexico,” explains Sonksen as he examines the City of Los Angeles flag for the students. “California had belonged to both Spain and Mexico at different times.”

Also known as Professor Sonksen by his Interdisciplinary students at Woodbury University, Sonksen is a third-generation Angeleno and he’s been giving tours of Los Angeles for the last 21 years.

“I always like getting young people interested in Los Angeles history because it all starts at home. If you know about your own local geography, then you can learn about the world,” he explains.

Sonksen started writing as a freshman at UCLA. Right after the ‘92 L.A. Riots. He was 18 and needed to express himself in a way that was uniquely his, so he started writing poetry. Inspired by Luis Rodriguez and early '90s hip-hop, it wasn’t long before he became known as Mike The Poet.

One regular tour stop is Olvera Street, where he usually pays a quick visit to the Plaza de Cultura y Artes.

“Olvera Street is a wonderful place to take people, because it's a very birthplace of the city 11 families, 44 pobladores started the city of Los Angeles really close to Olvera Street in 1781,” says Sonksen.

He started giving tours of Los Angeles on behalf of Redline right after college. It was his first job, but once he started infusing poetry, he found giving tours opened doors for him as well.

Before long, colleges and other institutions started inviting him to speak and it wasn’t long before he published his first book of poetry, I Am Alive In Los Angeles.

“And you have Asian, Mexican, as you can see African-American, and it represents the diversity of L.A. Thousands of people walk through here every day, so they wanted a mural that looks like our city,” says Sonksen as he shows the students Richard Wyatt's mural, City of Dreams/River of History, which is located near the end of the terminals.

For Sonksen, Los Angeles might as well be the world. He’s got everything right here including his third book of poetry, Letters To My City. The book is comprised of essays and poems and there’s sure to be a live performance of the work on his next walking tour.