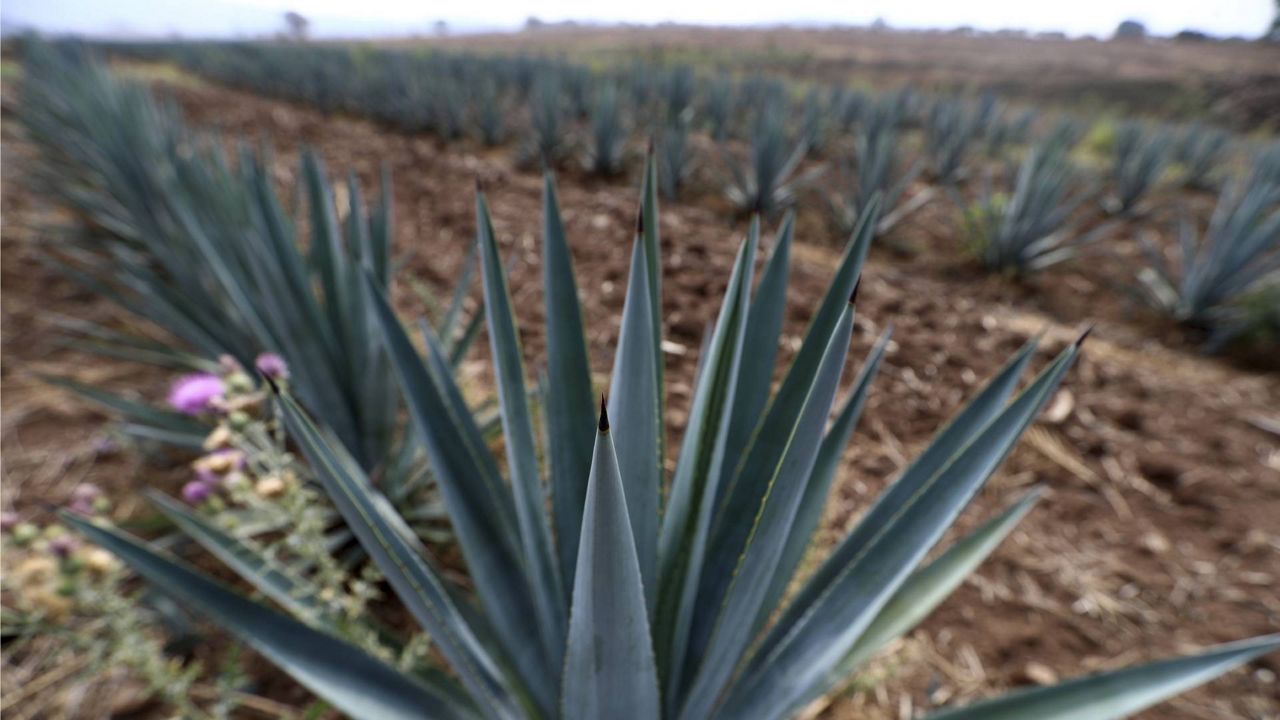 This June 5, 2019 photo shows one of many “blue agave" fields that line the roadsides in El Arenal, Jalisco state, Mexico. (AP Photo/Refugio Ruiz)

Mexico is seeing record growth in the global demand for its iconic alcoholic beverage, tequila.

The demand is being fueled in part by celebrity tequila brands from big names such as George Clooney, Kendall Jenner and LeBron James. But not everybody is happy about the industry's rapid growth. In an interview for "LA Times Today," foreign correspondent Kate Linthicum joined host Lisa McRee with the story.


Tequila is a small town in Jalisco outside of Guadalajara and the birthplace of the drink.

"Tequila was invented about 500 years ago by the Spanish conquistadors who came to Mexico and wanted alcohol," said Linthicum. "So, they took the agave plant, which indigenous people have been using for years, to ferment into alcohol. And they distilled it into the spirit that is tequila today. And I wanted to go there because I had heard about this bloom of celebrity tequila, and it seemed like everyone and their cousin had one. And I wanted to see kind of what that looked like on the ground, right at what it was doing."

While Linthicum was in Tequila, she visited the distillery that makes Cincoro, which is Michael Jordan's brand.

"They're a really interesting distillery because they make tequila or like 150 different brands," she said. "Everyone from Elon Musk to rapper E40 from the Bay Area has their brand of tequila. So, they're fascinating. They're kind of a Build-A-Bear for tequila. You can choose the taste profile that you want. You can choose the bottle, and you can choose the label. And Michael Jordan's tequila has been extraordinarily successful. I think they've doubled sales since they debuted last year. And of course, it makes sense because Michael Jordan is one of the first celebrities to understand that he was a brand. So, I think it's a really kind of full-circle part of the story that now Michael Jordan has tequila."

Another celebrity who has his own tequila brand is Dwayne "The Rock" Johnson, and he is very involved in making it.

"There's been a lot of criticism generally of celebrities getting into this because a lot of them have no connection to Mexico and have no real inherent connection to the spirit," said Linthicum. "Yet, you see them in their ad campaigns riding astride horses, agave fields, and really adopting the cultural touchstones of this. So, some celebrities are not very involved in the process. The Rock is somebody who seems to be pretty involved. Unlike most other celebrities, he has his own distillery, and the family that helps him produce it is a partner with this brand. So, if The Rock sells his term on tequila, that family is going to go to benefit as well."


Along with concerns of cultural appropriation, Linthicum says there are growing environmental worries regarding tequila-making.

"The global demand for tequila has increased 800% in two decades, and that's in part because celebrities are selling tequila, particularly to Americans, and that is having an impact," she said. "Agaves are plans that take seven or eight years to reach maturity. These are plants with long lives, and it takes a long time to grow them, so we're seeing a big agave shortage right now. The prices for agave have soared there, now around 30 pesos a kilo. Just five years ago, they were less than one peso a kilo. And some people say that the tastes are changing as well, and with more mass production comes a different kind of distilling techniques. And with the more modern techniques, you're losing flavor."

"It takes a lot of water, and then it produces a lot of wastewater, all that fermenting goodness that is later distilled into tequila," said Linthicum. "Most of it needs to be disposed of. And there's been a lot of issues and concerns about that kind of polluting other water sources and in other parts of the region."